Johannes Kepler (1571-1630) was the astronomer who recognized that the planets move around the Sun in ellipses; this discovery led directly to the Newtonian revolution which gave us our present understanding of the laws of physics.

Kepler wrote many works of nonfiction on astronomy and optics. However, the most peculiar of his writings, Somnium, or, in English, Dream, is a short fictional voyage to the Moon.

Its narrator, Duracotus, a native of Iceland, studies astronomy with Tycho Brahe in Denmark. When he returns home he discovers that his mother knows far more about the Moon than Tycho does; she reveals that she is a witch and converses with demons who regularly travel through space. (Kepler himself worked with Tycho, the greatest astronomical observer of his age, and his own mother was once accused of witchcraft and imprisoned.) 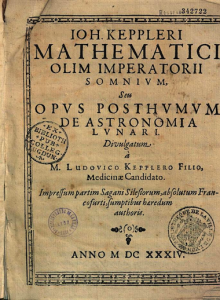 Title page of Johannes Kepler’s Dream. Published in 1634 by his son after his death, which is why this opus is posthumum.

The witch summons a demon, who explains that travel to the Moon is possible only when the shadow of the Earth touches it–that is, during a lunar eclipse.

Because the opportunity is so fleeting, we take few human beings along, and only those who are most devoted to us. Some man of this kind, then, we seize as a group and all of us, pushing from underneath, lift him up into the heavens. In every instance the take-off hits him as a severe shock, for he is hurled just as though he had been shot aloft by gunpowder to sail over mountains and seas. For this reason at the outset he must be lulled to sleep immediately with narcotics and opiates. His limbs must be arranged in such a way that his torso will not be torn away from his buttocks nor his head from his body, but the shock will be distributed among his individual limbs. Then a new difficulty follows: extreme cold and impeded breathing.

The cold is relieved by a power which we are born with; the breathing, by applying damp sponges to the nostrils. After the first stage of the trip is finished, the passage becomes easier. At that time we expose their bodies to the open air and remove our hands. Their bodies roll themselves up, like spiders, into balls which we carry along almost entirely by our will alone, so that finally the bodily mass proceeds toward its destination of its own accord. But this onward drive is of very little use to us, because it is too late. Hence it is by our will, as I said, that we move the body swiftly along, and we forge ahead of it from now on lest it suffer any harm by colliding very hard with the moon. When the humans wake up, they usually complain about an indescribable weariness of all their limbs, from which they later recover well enough to walk.

In this passage Kepler demonstrates that he understands many of the problems of space flight: the need for sudden acceleration, the dangers of its effect on the body, the cold of space, the gradual thinning of the atmosphere, the “onward drive” provided as the Moon’s attraction grows. Some of these he must solve by magic, such as the demons’ lifting power and warmth. Some he tries to solve by plausible invention — arranging the passengers’ limbs and applying the damp sponges — just as a modern science fiction writer would. Though Somnium was written in 1609, nearly sixty years before Newton published a complete theory of gravity, Kepler evidently knew that planets attracted other massive bodies and that the attraction became weaker with distance.

The bulk of the story is concerned with a detailed description of astronomy as seen from the Moon. The Earth hangs fixed in the sky, the Sun arcs slowly overhead every 28 days, eclipses are markedly different from terrestrial ones, and the behavior of the planets is somewhat novel. Kepler evidently delighted in working out the facts of lunar astronomy. His whole story is carefully consistent with the known facts of seventeenth-century science. He speculates on the effect of long days and nights on life on the Moon. Plants and animals take forms with tough skins to endure the scorching Sun, and the oceans boil at noon.

To my mind, Somnium is an early predecessor of that flavor of science fiction known as the “hard-science” story: one which hews closely to the line of contemporary science. (Modern authors best known for hard SF include Arthur Clarke, Isaac Asimov, and Hal Clement.)

Once he’d thought “How would the sky look if I were standing on the Moon?” Kepler’s imagination wouldn’t let go of the question, ideas blossomed in his head, and he determined to write a story about them. This same impulse afflicted Edgar Allan Poe and Mary Shelley and Jules Verne and H. G. Wells. By the 20th century, enough stories like theirs had been written that one could draw a circle around them and give them a name, saying, “This is science fiction.”

Amusingly, Kepler yielded to a temptation that must also have occurred to many a subsequent hard-SF writer — he added footnotes to explain the meticulously-built scientific background to his story. The footnotes run more than four times the length of the story itself! And they are well worth reading. 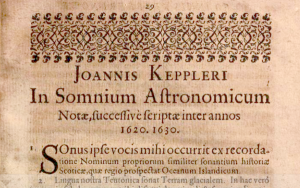 Getting hold of a copy of Somnium is not trivial, though. Two English translations appeared in the 1960s, Edward Rosen’s and Patricia Kirkwood’s, but apparently no English version is currently in print. Copies are available on the used market, but so far, their asking price has always exceeded the level of my interest in owning a copy of Kepler’s story. (Thank goodness for libraries!)

If you read Latin, here’s a 1634 edition online. The Google Books project scanned a copy with very thin pages, though, so characters from the back of a page show through faintly, making the text difficult enough to read with the human eyeball and also, I believe, messing up automated Optical Character Recognition. So the plain text and EPUB versions are not very useful.

But another version of Kepler’s story has recently appeared. I’ll say more about this in a few days.