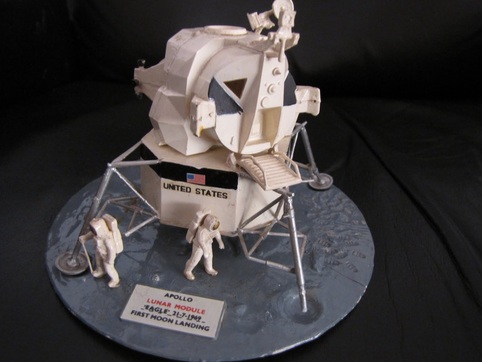 Airfix model of the LEM – A gift sometime later. I really enjoyed making it.

July 20 1969, I was  12 years old living in a regular suburban house with regular suburban parents. In my family I the eldest of five at the time. As with most families then we had to be in bed at 8 pm on weeknights, maybe 9.30pm at weekend’s school holidays or not that was the way it was. The Moon landing held a big interest for me, I really wanted to see it. Irish TV (Telefis Eireann) were going to cover the story with a special programme. Much to my surprise, the pestering of my parents in just the right way and at just the right time produced a yes. Deirdre was allowed to stay up and see how the story unfolded.

Telefis Eireann didn’t start broadcasting until 6 pm in those days, the Moon landing programme started at 9 pm and was presented by Kevin O’Kelly. We had a small black and white TV with a rabbit-ear aerial. TV sets then had to warm up and as they did so dust at the back kinda threw out a burning smell. When you looked inside the gaps at the back you could see the glass valves and the tube.

Our TV had lots of dots on the screen plus problems with the vertical and horizontal hold. TV’s of that era often suffered from this affliction, unpredictably and always inappropriately. Televisions from 1969 had the original rolling news way before Sky! ‘Hitting the box’ as it was referred to, was the required cure when twiddling the dials at the back did not fix the problem. Late into the night only my Dad and I were still watching fine-tuning and adjusting the TV to get the best picture. There were lots of previews and progress reports, and chat about what was going to happen. I had never been up so late in my life. The biggest moment in the history of space exploration was going to play out in front of my eyes directly from the surface of the Moon. My memory is full of beeps and tech talk from Houston (Houston Texas was the mission control centre for the Apollo mission) to the Command Module and from Houston to the Lunar Lander. I recall seeing the tiny triangular window which was the view from the Eagle as it came in to land on the surface of the Moon.

HOUSTON: We copy you down, Eagle

EAGLE: Houston, Tranquillity Base here. The Eagle has landed!

Touchdown 9: 18 pm  (USA time) A Caption on the TV screen saying “Man on the Moon”, overlaid onto live shots of Houston control room.

There was continuous coverage in preparation for the Moonwalk, which was originally scheduled for 2.00am but delayed. Pictures of mission control, the sound of Houston – Apollo conversations and then the first TV pictures from the lunar surface just a few minutes before the Moonwalk. I remember what seemed like endless hours waiting for the hatch to open. Kevin O’Kelly had to do a lot of talking, and a lot of speculation about what was going on and just what the two astronauts Neil Armstrong and Buzz Aldrin were doing inside the lunar landing module.

Many people all over Ireland waited and waited to see this monumental moment and at last at 3.56am Neil Armstrong came down the ladder and said those words “One small step for man one giant leap for mankind” it was a neck choking emotional thing to see live on TV. A man standing on the surface of the Moon 250,000 miles from Earth, the first human ever to be on another world. At 4.16 am Armstrong was joined on the lunar surface by Buzz Aldrin.

My memories of how they bounced around in the Moons weaker gravity will never leave me. Also, the American flag is placed on the lunar surface. Collins orbited the Moon in the Command Module waiting for Armstrong and Aldrin to blast off when their incredible visit was over to re dock for the journey home.

Some sleep was badly needed, Dad had to go to work the next day, as it was Monday so we went to bed. Telefis Eireann covered the missions dramatic lift off from the Moon. I don’t remember seeing that live, I think I saw it on the news later in the evening.

For many days after the Moonwalk was repeated on TV. It really was an incredible achievement. The astronauts were so courageous because if something went wrong with the Lunar Module there was no way back to Earth for them. Michael Collins would have had a crushing and lonely trip home if he could have done it by himself.

The Apollo 11 crew left among other things a 9 by 7-inch stainless steel plaque on the Moon, to commemorate the landing and provide basic information about the visit to any other beings that may eventually see it. The plaque reads:

We came in peace for all mankind.

The plaque depicts the two sides of planet Earth and is signed by the three astronauts, Armstrong, Aldrin and Collins as well as US President Richard Nixon.

On the return journey to Earth, I recall the splash down and recovery. A large aircraft carrier in the Pacific Ocean, a partly clouded sky and the world’s press. Everyone was waiting to see the parachute bringing the Apollo crew back to Earth. I recall the crew displayed in an oblong chamber with big windows and people looking in at them. The reason for the chamber was the paranoia about Moon bugs or Moon viruses that might have contaminated the astronauts, all three of them even though Collins did not set foot on the surface. So they endured this quarantine and later on August 13 they had a ticker tape parade in New York, which I saw, on the news. This was to honour these brave men who had been on an extraordinary journey and had survived . They had given our planet and its people an extraordinary milestone in human history that has not been surpassed since that incredible day.

Back in February 1969 when I was 11, I had bought a copy of  National Geographic Magazine. The issue came with supplement map of the Moon showing the proposed landing sites for the Apollo missions. It says in the bottom left-hand corner of the map about the proposed Apollo 11 mission for July 1969.

Interestingly enough, while the Moon has not as yet become a launch pad to the universe, July 20, 1969, is linked directly to my life today. My interest in space exploration has led me to write several articles on the subject for local and International amateur astronomy magazines. My immersion in astronomy and space is linked to being a witness of the Apollo 11 Moon landing. Many of my drawing workshops, drawings and paintings stem directly from that moment. The National Geographic moon map hangs in my study to this day and is an inspiration.