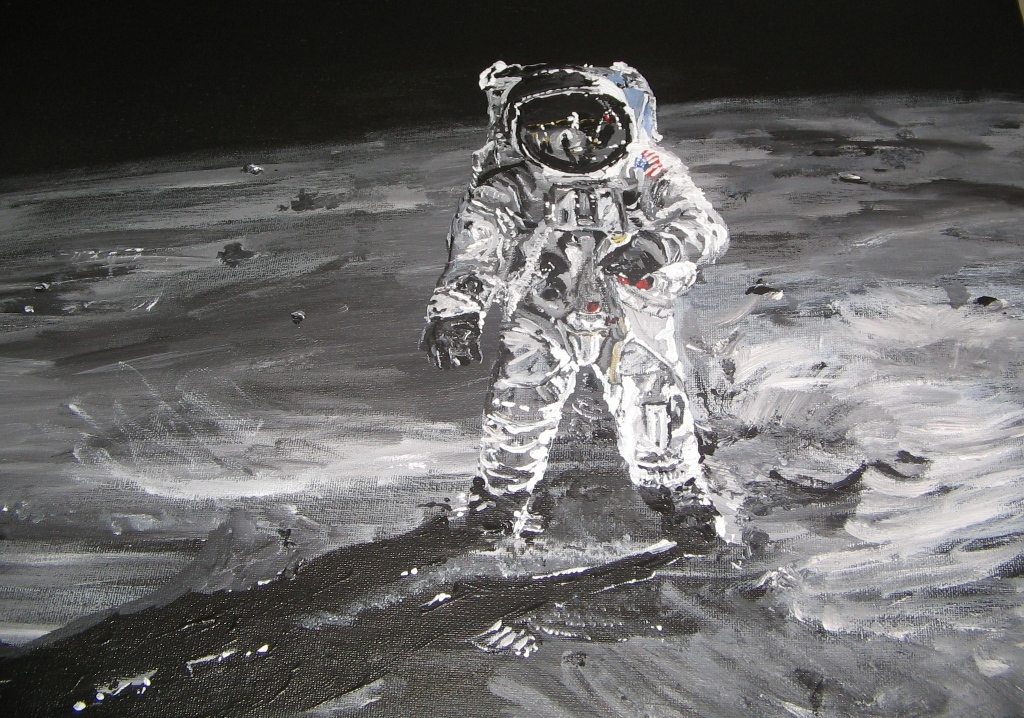 Buzz Aldrin on the moon – Acrylics and pastel on canvas 24X24 inches. By Deirdre Kelleghan

The Apollo 11 Moon landing in July 1969 had a profound effect on my life. It gave me an interest in astronomy and space that has stayed with me ever since. It has inspired my paintings and my outreach education efforts later in life.

In September 1969 I went back to school full of anticipation that my teacher would talk about the biggest global event of the summer. For some reason I truly thought, she would tell us more about it and make a big deal of it in class. No, not a word, not a mention, nothing at all. I was beyond disappointed at the time, that has stuck in my craw ever since. Back in 1969, you did not really engage with your teacher, ask questions or bring up issues. You sat at your desk (wooden with an ink well) with 54 other children and absorbed whatever they dished out. My last year in primary school was in my 12-year-old mind blighted even though from memory she was a good teacher in general. Looking back on it I place that negative experience as the root of my total immersion in real-time education today.

December 1969 a 50 mm Tasco telescope was my Christmas gift. It was white with a small plastic tripod. Treasure at the end of a tube, it brought the moon to my eye, it opened my mind and warmed my heart.
In 1970 the American Embassy in Dublin put a piece of moon rock on display in a Perspex bubble. It was guarded by American service men in lovely uniforms with guns. Thousands of people queued around the block to look at it. When it was my turn to file past that was such a great moment. The hand size grey rock was held in a claw like a diamond on a ring except it was visually unremarkable. Knowing it came from the moon and was brought to Earth via the bravery of remarkable men made it very special.

In November 2004 I had the pleasure of attending the National Concert Hall in Dublin to see Buzz Aldrin. He was participating in a live stage interview called Face to Face, with Irish TV personality Gay Byrne. An amazing interview with the second man on the moon. Colonel Aldrin is an extremely interesting person. He held the packed hall for over an hour with his recollections of his life and his historic visit to the moon. Afterwards, he took questions from the floor for another hour and elaborated on his personal life. He left the audience in awe of his honesty and in admiration of his achievements. I was proud to join the standing ovation at the end of this prestigious event.

Astronomy and space have weaved their way all through my life. When my children were small, there was little time to devote to these interests.  However, somehow I managed to pay attention to the constant growth of exploration in our solar system and beyond. Apollo 11 left us with a rich legacy and a void that has not been filled. Enabling human beings to stand  on another world demands not only the best technology of a given time, it requires the will and drive to actually make that happen. Will it happen again in our lifetime ? Will the world be inspired by another solar system milestone ? Will we be on the edge of our collective seats watching a human step onto Mars ?  What do you think ?