This past weekend, I was in Baltimore, Maryland to present on the theme of Cosmological and Theological Heaven for the 2018 Logan Visionary Conference. I had a wonderful experience presenting at the American Visionary Museum and will blog about my presentation next week. This week, I want to share with you an unexpected surprise I received while in Baltimore: A personal tour of the Goddard Space Lab. 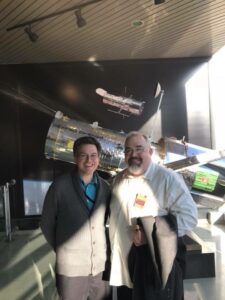 Leonard Garcia and I outside of Mission Control for the Hubble Space Telescope.

A few days before I left the snow and cold of Wisconsin, I received an e-mail from Leonard Garcia. Leonard is in charge of editing grant proposals for scientists at NASA Goddard. He was planning on attending the conference I was speaking at, is an avid reader of The Catholic Astronomer, and wanted to give me a personal tour of Goddard since I was in town. He explained to me that he loves his job because he is constantly reminding scientists why people should care about their work. We had a delightful conversation about memorable mission proposals Leonard helped shape, both those that are active space missions and those that didn’t receive funding and were put on the shelf.

One fun story Leonard shared with me was of a proposal for a project called AHAB. The project would have developed a harpoon-like retrieval mechanism to break into the heart of an asteroid, grab a sample of it, and then bring it back to Earth. I mentioned to Leonard that I had the privilege of touring the OSIRIS-Rex mission headquarters in Tuscon, Arizona and was struck by the similarity between the two projects. Leonard’s response was animated and child-like as he stated, “Why bounce off the surface on an asteroid when you could jam a harpoon into one!” My initial thought was, “This is my kind of scientist!” 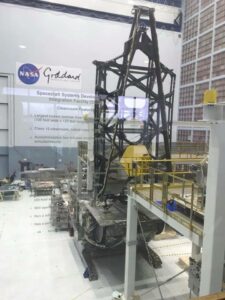 Replica of the James Webb Telescope’s support structure with one of its light gathering panels attached. 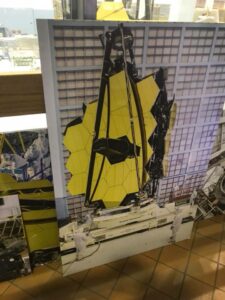 Image of the James Webb Telescope in its folded position for launch. The same position as the replica we saw at the Goddard clean room. 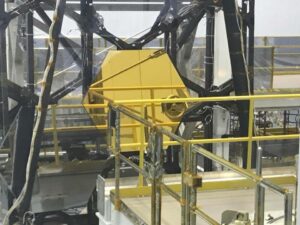 One of the tiles of the primary mirror that is the same as the tiles on the James Webb Space Telescope. 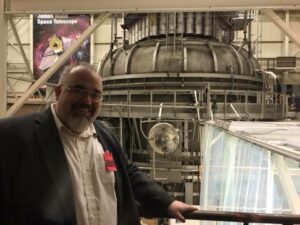 Yours truly standing outside the pressure chamber housing the Parker Solar Probe.

The purpose of pressure chambers is to simulate the conditions of space, allowing scientists to know how their projects will react to the vacuum of space. The next stop on our tour was to see the different pressure chambers at Goddard. In one of the larger chamber, the Parker Solar Probe was being tested as it prepares for its journey to the sun. I mentioned this probe in an earlier post, hoping to schedule a trip to see it launch into space. Whether or not I will be able to make that trip happen, it was a fun moment to observe the pressure chamber in operation that is preparing this probe for its journey. Below is the video of the Parker Space Probe being lifted into the vacuum chamber!

From there, we visited Goddard’s Earth Science building. Having written a great deal about Human Ecology, Pope Francis’ Encyclical Laudato Si’, and having a deep desire to work on my personal approach to care for creation, our visit to the Earth Science building was a true blessing! Whether it be the replica of fossilized dinosaur footprints or the many space images of our common home that looked more like works of nonrepresentational art than science, I found new inspiration to continue reflecting on care for creation for The Catholic Astronomer. Below are some pictures and a video of the dinosaur footprint fossils. 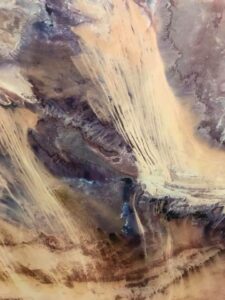 Art, Earth, or Both? 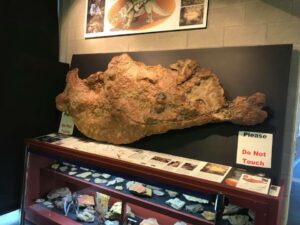 Replica of fossilized dinosaur footprints found on the grounds of Goddard.

As we were going through the Earth Science building, we bumped into Jennifer Wiseman. In addition to being a Hubble Senior Project Scientist, she is also the Director of the AAAS program for Dialogue on Science, Ethics, and Religion. As Jennifer talked with me about her work to promote a healthy relationship between faith and science through seminary education and my involvement with the Faith and Astronomy Workshop with the Vatican Observatory Foundation, it became clear that many of our goals were similar. I greatly look forward to reconnecting with Jennifer at some point to learn more about the AAAS and to share my experiences with her of the Faith and Astronomy Workshop.

After our chat, Jennifer offered to include me on her tour of the Hubble Space Telescope Control Center. In short, I felt like I was a kid in an astronomical candy store! 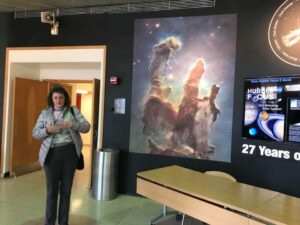 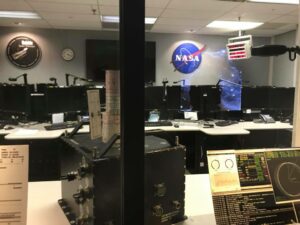 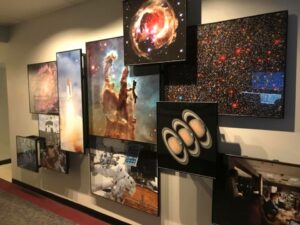 The theme that emerged with the visit of Goddard was how God works in mysterious ways. By the end of the trip Leonard and I both felt that this tour was meant to be, allowing me an opportunity to both appreciate the work of NASA Goddard, but also learn about the AAAS and dialogue between faith and science. And since this was literally a last minute addition to my trip, it was clear to both of us that God’s hand was at work during this day. We concluded with a lovely dinner with Leonard’s wife and two daughters, sharing stories, music, and our faith with one another. In short, a true blessing.

What are some of the surprises that God has blessed you with today? Pray with this question and, together, let us allow our hearts to be open to being surprised by God’s grace! 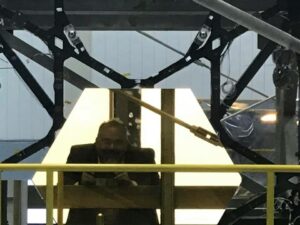