On March 7 the “Google Doodle” featured mathematician Olga Ladyzhenskaya.  If you clicked on the “doodle” you probably saw something like the Wikipedia entry that showed up at the top corner of the screen:

Olga Aleksandrovna Ladyzhenskaya was a Russian mathematician. She was known for her work on partial differential equations and fluid dynamics. She provided the first rigorous proofs of the convergence of a finite difference method for the Navier–Stokes equations.

I wanted to find out a little more about this person, and in searching around I came upon a 10-year-old blog post from Mihai Caragiu, Professor of Mathematics at Ohio Northern University, who noted a “photograph of a 79 years old Ladyzhenskaya in her apartment in St. Petersburg featuring an icon of the Most Holy Theotokos [Mother of God]”.  I could not really tell for sure that the woman in the picture was Ladyzhenskaya, and there was not additional information, but a little more searching quickly turned up an article in the Notices of the American Mathematical Society (vol. 51, num. 11, December 2004) on Ladyzhenskaya.  Within that article (entitled “Olga Alexandrovna Ladyzhenskaya (1922–2004)” was the photo Caragiu had noted, with caption saying that this was indeed “Ladyzhenskaya, age 79, in her St. Petersburg apartment”.  Next to Ladyzhenskaya’s desk as seen in the photo is obviously an icon of Mary holding Jesus.  And, on the other end of her desk is another piece of religious artwork.  It is too small to see clearly, but it seems to be Jesus or a saint: someone in a robe, with a halo or aura around the head. 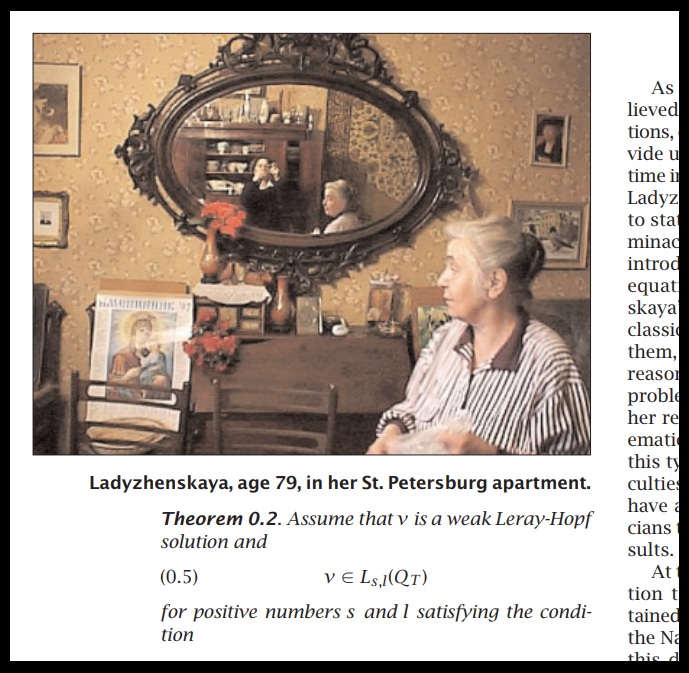 From the pages of the Notices of the American Mathematical Society

Of course, some religious artwork does not necessarily mean Ladyzhenskaya was a person of faith.  But, a little more digging led to the Cornell University Library and The Eugene B. Dynkin Collection of Mathematics Interviews.  In a 1990 interview with the mathematician Anatoly M. Vershik, Dynkin and Vershik talked about Ladyzhenskaya.  And, what appears in the interview?  That her father tried to save the children of a priest whom the communist authorities were about to exile, and she was herself a charitable and “profoundly religious” person.  So, it seems the religious artwork was there in Ladyzhenskaya’s apartment to be more than just art.

I frequently write on this blog about how my students, or visitors to my college’s observatory, or others have expressed how they perceive some divide between religion and science, and I write that this perception is a problem, especially for science, which needs allies, not enemies.  But as far as I can tell, such a divide does not actually exist.  Witness Olga Ladyzhenskaya:

If you like this little post on Olga Ladyzhenskaya, and you like how it is a completely different perspective from anything else you would have found when you clicked that Google Doodle, then consider clicking right here and supporting the outfit that makes this possible—the Vatican Observatory Foundation.  The VOF is the outfit that keeps the Vatican’s U.S. telescope (on Mount Graham in Arizona) running.  That’s why this blog exists—to keep that telescope doing science.  Support the blog—support the telescope—support science.