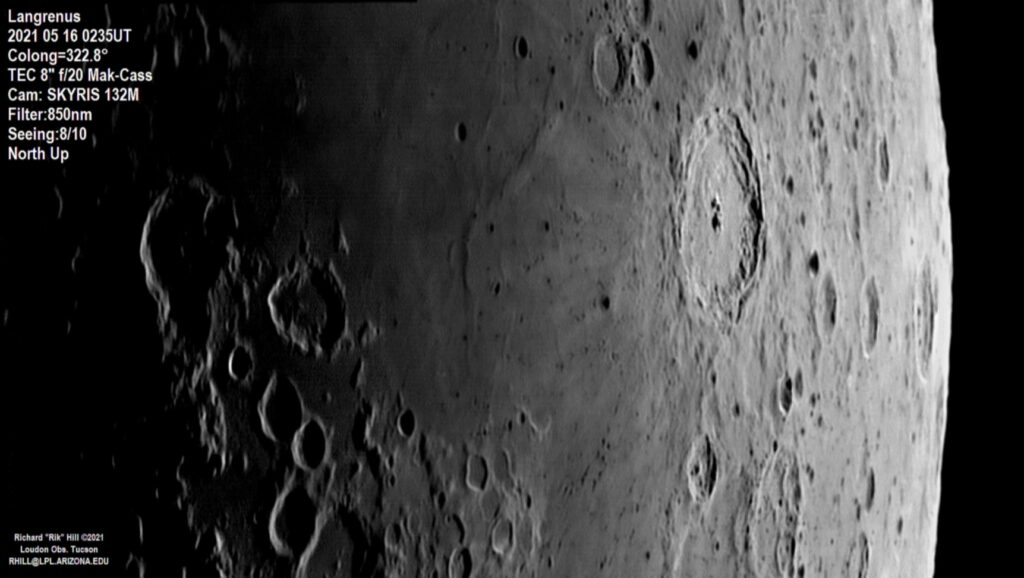 Early in every lunation the spectacular crater Langrenus is seen on the eastern shore of Mare Fecunditatis. Here it is only a little more than 4 days past new moon and the great crater Langrenus (138km diameter) is clearly seen even in binoculars! Unfortunately it is usually overshadowed by its bigger brother Petavius (182km) to the south, with the huge rima, and often overlooked. To the west (left) of Langrenus are several large wrinkle ridges or dorsae. Dorsa Mawson is the northern branch that points to two craters on the upper edge of this image, Bilharz (44km) on the left and Atwood (31km) on the right it makes a sudden angle heading due south. Notice the shadow filled crater west of Langrenus. This is Al-Marrakushi (8km) and it’s surrounded by 1-5km secondary craters formed from the Langrenus impact. Take some time to look up this region on LROC Quick Map and look at all the odd shape of these craters formed from low velocity impacts! You can see some of that if you expand this image to 100% on your browser.

Moving east from Langrenus, heading for the limb, we see three craters in a row. The first is Barkla (40km) followed by the larger Kapteyn (48km) and the last, largest one, very foreshortened and very near the limb is La Pérouse (80km). The isolated crater due south of Langrenus is a nicely terraced Lohse (43km). A small crater with a clear central peak.

On the western shore of Mare Fecunditatis is a collection of craters just coming into the sunlight. The pear-shaped crater farthest west (left) is Gutenberg (70km) with Gutenberg C (45km) being the appendage to the south. The very odd looking crater to the right of it is Goclenius (73km)  with Magelhaens (37km) and Magelhaens A (19km) just below. Watch these as the sun rises on them over the course of an evening.

Wishing you a Happy New Year!!

22  |  Why the Pope’s telescope is in Southern Arizona

23  |  May Light Shine In Your Darkness: A Christmas Star Reflection