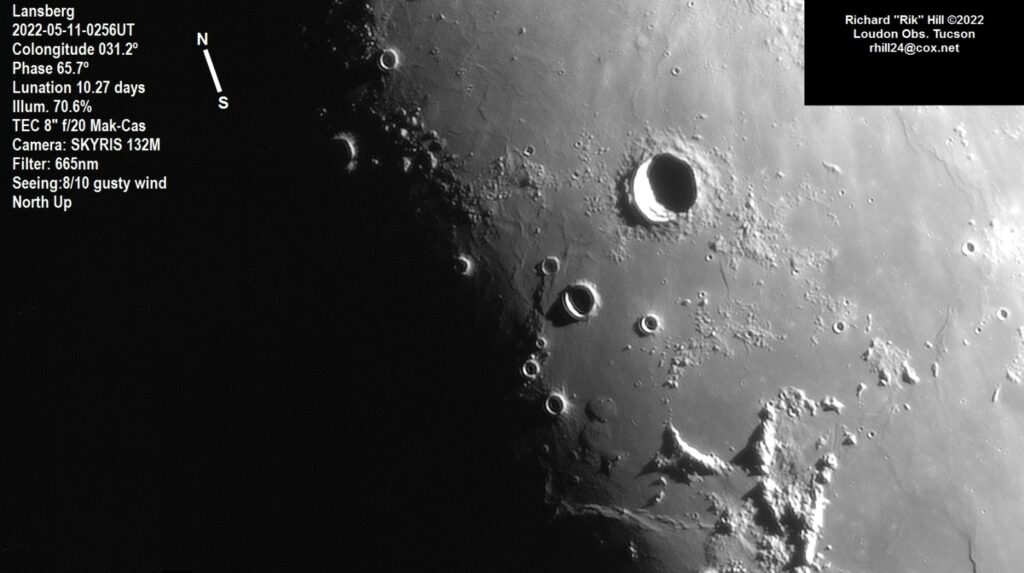 The large crater above and right of center is Lansberg (41km dia.) in a line with Copernicus and Reinhold. This area of the Moon, in the middle of Oceanus Procellarum is full of domes. This image was processed to show these Lansberg domes the best. There’s a system of about six satellite craters to Lansberg just below and to the left. Farther below Lansberg is a bright arc of a crater wall that has its northern half buried in the so the arc opens to the north. Just to the left (west) of the western arc you can see the mild swellings that are Domes Lansberg. There are three of them, the larger two being easily seen but there’s a third one further to the south with what appears to be a tiny central peak rather than the usual pit. There is a pit behind (west) of the peak as can be seen in the LROC Quick Map but it is in shadow in the image. This same lighting can be seen in the image on the Lunar Domes Atlas page for this dome system. The domes look like pancakes on the lunar surface. The northernmost dome is 16-20km in diameter but only 120m high, while the middle one is 19-25km in area and only 80m in height. The third one is 15-19km in size and 120m high. With those aspect ratios it’s easy to understand why this low sun angle is needed to see them. As soon as the sun get higher, they disappear.

At the top of this image, directly above Lansberg, we can see two more smaller domes. These are the Reinhold domes. For orientation, Reinhold (49km) is large crater just above right and off the edge of the image. (The image is not aligned strictly North-South.) You can see a bit of the ejecta splash. These kind of features, like wrinkle ridges, are best seen, often only seen, at the terminator to be sharp eyed!