Craters are created by the massive release of energy from a hypervelocity impact of a meteoroid with a larger body – such as the Moon or Earth. The typical relative velocity for an inner Solar System meteoroid encountering the Earth is between 4-30 km/s[2]; a comet falling inward from the the outer reaches of the Solar System can encounter the Earth at relative speeds of 12-72 km/s[3].

The destructive potential of meteoroid impacts was demonstrated when the shards of Comet Shoemaker-Levy 9 hit the atmosphere of Jupiter in July of 1994. The effects of large impacts on Earth’s environment and biosphere are known largely due to the discovery of the Chicxulub impact structure in Mexico’s Yucatán Peninsula. That impact has been linked to the mass extinction event marking the end of the Cretaceous Period 65 million years ago.

Smaller impacts typically excavate small circular craters – like Meteor Crater, Arizona; the rock beneath a large impact site can rebound and uplift, often forming a central peak. In the largest of impacts, the crust around the impact site is shattered, and the rebound can form a ring of mountains inside the crater.

Recent studies by Dr. Gordon “Oz” Osinski and a team of scientists shows that once formed, large impact craters also have certain beneficial effects, particularly for the development of microbial life. Hydrothermal systems can develop in the shattered crust and faults around large impact craters; crater lakes can create varied habitats and conditions conducive for life, that persist long after the impact event. 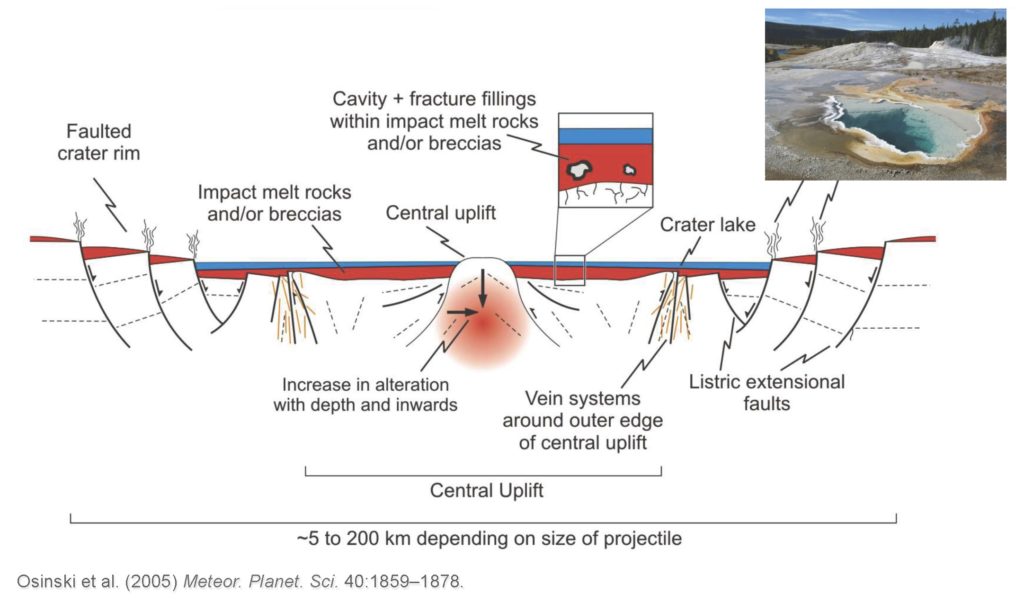 Graphic illustrating a hydrothermal system within a large impact crater on Earth.

My wife, Connie, and I listened to a volunteer NASA/JPL Solar System Ambassador teleconference featuring Dr. Osinski talking about “Impact Cratering in the Solar System” – one of my areas of interest. Much of the information in the first part of his talk we already knew, but when he mentioned his research into hydrothermal systems (think: Yellowstone) developing in large impact craters, I was quite literally blown away!

These findings may have important implications for our understanding of the origin and evolution of life on the Earth, and reveals locations to search for life on other worlds.

Dr. Gordon “Oz” Osinski is an Associate Professor and the NSERC/MDA/CSA Industrial Research Chair in Planetary Geology in the Departments of Earth Sciences and Physics and Astronomy at the University of Western Ontario, Canada. He holds a PhD in geology from the University of New Brunswick (2004). Dr. Osinski’s research interests are diverse and interdisciplinary. His main area of research focuses on understanding impact cratering as a planetary geological process on the Earth, Moon and Mars. The focus of his growing research program is on the beneficial effects of meteorite impacts, from the implications for the origin and evolution of life, to the economic benefits as exemplified by the world-class ore deposits in the Sudbury region. His research interests also include the development of exploration technologies and techniques for application in remote and extreme environments both on Earth and in Space. Dr. Osinski is also Director of the Centre for Planetary Science and Exploration

See: THE EFFECT OF METEORITE IMPACTS ON THE ELEMENTS ESSENTIAL FOR LIFE
[1] Pluto… I know…
[2] Speeds gotten from: http://neo.jpl.nasa.gov/ca/ and http://arc.aiaa.org/doi/abs/10.2514/3.5539?journalCode=aiaaj
[3] See: http://physics.stackexchange.com/questions/99737/what-will-be-the-velocity-of-a-comet-is-falling-to-the-earth-from-infinity-at-th