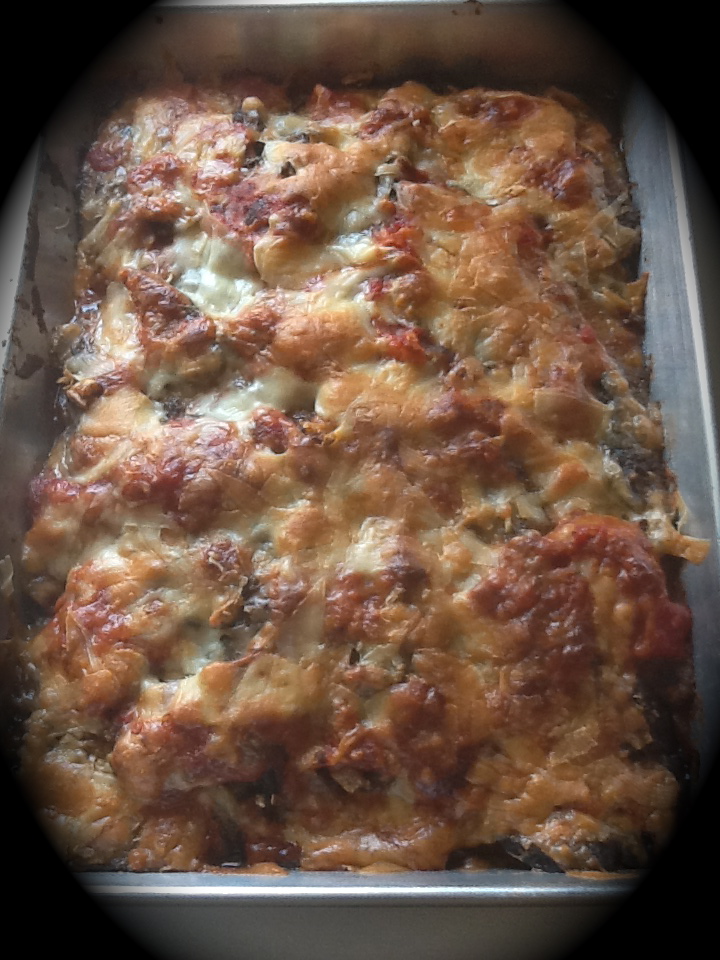 Eggplant Parmesan made by Yours Truly!

It doesn’t take a rocket scientist to see that American politics and the Catholic Church have a “love/hate” relationship.  At one level, we can see this tension as a positive, affirming the relevance of the Church, making politicians feel a need to address statements made by Popes, Cardinals, and Bishops.  At another level, the constant struggle between Church and State has lead many households to establish an unwritten rule of “dinner table etiquette”: Don’t talk about politics and religion.

In recent days, this “spaghetti ethic” has been revisited by politicians in regard to Laudato Si’.  Under the rubric of “the Church shouldn’t comment on science,” certain politicians have insinuated that, since the Church got it wrong with Galileo, we should stay out of the science (and politics) of global warming.   Two thoughts come to mind when hearing these protests.  First, there is much evidence that the mistake we made with Galileo was that his trial was driven by political motives, not the best science of the day (check out Br. Guy’s presentation, “The Galileo Affair”).  In regard to Laudato Si’, the Pope is presenting the best science of the day, asking political entities to address the ecological crisis this science predicts.  Therefore, one could ask, “Where would Galileo find himself more at home when reading Laudato Si’: The Pope or the politicians?”

I start with these reflections because Chapter 5 of Laudato Si’ is, by far, the most “political” part of the Encyclical.  Many in the Church, especially the young, have developed a deep repugnance and hatred for politics because of Church/State clashes.  This division deepens when clergy and lay people make political affiliation a litmus test for being a “faithful Catholic,” leaving anyone who does not fit the parameters of this hybrid “Poli-Catholic” ideology with a sense of alienation from God and the Church.  In light of this, it should not surprise us that the Catholic Church in America finds itself deeply divided along political lines.

Though the pacifist heart may want to take this reality and use it as a means to justify a “privatized Catholicism,” Pope Francis reminds us that living our faith is not done in a vacuum.  Rather, our faith is lived in a society that has religious structures, social structures, economic structures, political structures, and puts us in direct contact with our neighbor and the world.  Here is a section from Laudato Si’ that emphasizes the various ecological efforts that have been made by social and political entities, some successful and some that have failed, the Pope wants us to be aware of and form a response too.

The 1992 Earth Summit in Rio de Janeiro is worth mentioning. It proclaimed that “human beings are at the centre of concerns for sustainable development”. Echoing the 1972 Stockholm Declaration, it enshrined international cooperation to care for the ecosystem of the entire earth, the obligation of those who cause pollution to assume its costs, and the duty to assess the environmental impact of given projects and works. It set the goal of limiting greenhouse gas concentration in the atmosphere, in an effort to reverse the trend of global warming. It also drew up an agenda with an action plan and a convention on biodiversity, and stated principles regarding forests. Although the summit was a real step forward, and prophetic for its time, its accords have been poorly implemented, due to the lack of suitable mechanisms for oversight, periodic review and penalties in cases of non-compliance. The principles which it proclaimed still await an efficient and flexible means of practical implementation.

Among positive experiences in this regard, we might mention, for example, the Basel Convention on hazardous wastes, with its system of reporting, standards and controls. There is also the binding Convention on international trade in endangered species of wild fauna and flora, which includes on-site visits for verifying effective compliance. Thanks to the Vienna Convention for the protection of the ozone layer and its implementation through the Montreal Protocol and amendments, the problem of the layer’s thinning seems to have entered a phase of resolution. (Laudato Si’ 167-168)

Many more examples could be given, but all of them would lead to the same conclusion: As Catholics, we are to be involved in addressing threats against human dignity.  This call to civic participation should not surprise us.  Remember, if you will, the Papacy of St. John Paul II who, with the authority of the Petrine Office, directly confronted the Communist occupation of Poland.  As St. John Paul II inspired the Solidarity Movement, the social pressure against Communism became too much for the Soviet Union, leading to their withdrawal.  Therefore, Pope Francis’ call for Catholics to be involved in addressing the ecological crisis continues a trademark of the modern Papacy: Inspiring the faithful to actively participate in social issues that can adversly impact human dignity.

One distinct difference between Pope Francis and the way American society approaches social issues is the call for fruitful dialogue and charity between the Church, society, and science to develop a new solidarity, rooted in protecting the human person through protecting creation.

The majority of people living on our planet profess to be believers. This should spur religions to dialogue among themselves for the sake of protecting nature, defending the poor, and building networks of respect and fraternity. Dialogue among the various sciences is likewise needed, since each can tend to become enclosed in its own language, while specialization leads to a certain isolation and the absolutization of its own field of knowledge. This prevents us from confronting environmental problems effectively. An open and respectful dialogue is also needed between the various ecological movements, among which ideological conflicts are not infrequently encountered. The gravity of the ecological crisis demands that we all look to the common good, embarking on a path of dialogue which demands patience, self-discipline and generosity, always keeping in mind that “realities are greater than ideas”. (Laudato Si’, 201)

This call of Pope Francis returns me to my initial metaphor of the “Catholic dinner table.”  As a global community, the Pope is reminding us that we, as members of the human family, all have a place at this table.  It is a meal that transcends the political ideologies of this world and calls us to a far more transcendental understanding of the human community.  At this table, we are to reach out to the poor and needy, ensuring that the resources to feed and provide for these guests are protected.  The goal of this dinner will, invariably, lead to heated discussions about how this family is to achieve these goals.   Nevertheless, even if these arguments lead to an occasional “food fight,” we are called to diligently and charitably work to uphold the dignity of all the members who sit at this table, seeing in them God’s image and likeness.

Reflection and Discussion: One understandable frustration that can arise when talking about addressing global issues is the question, “What can I really do to change the world as it is?”  Instead of disengaging out of frustration, let’s have a good discussion on what we can do, locally and nationally, to promote the Pope’s vision of Catholic ecology.  Let us work to set the “table of the Lord,” reverencing God’s image in our sister and brother.  Therefore, pull up a chair, grab the mashed potatoes, and let the food fight begin!