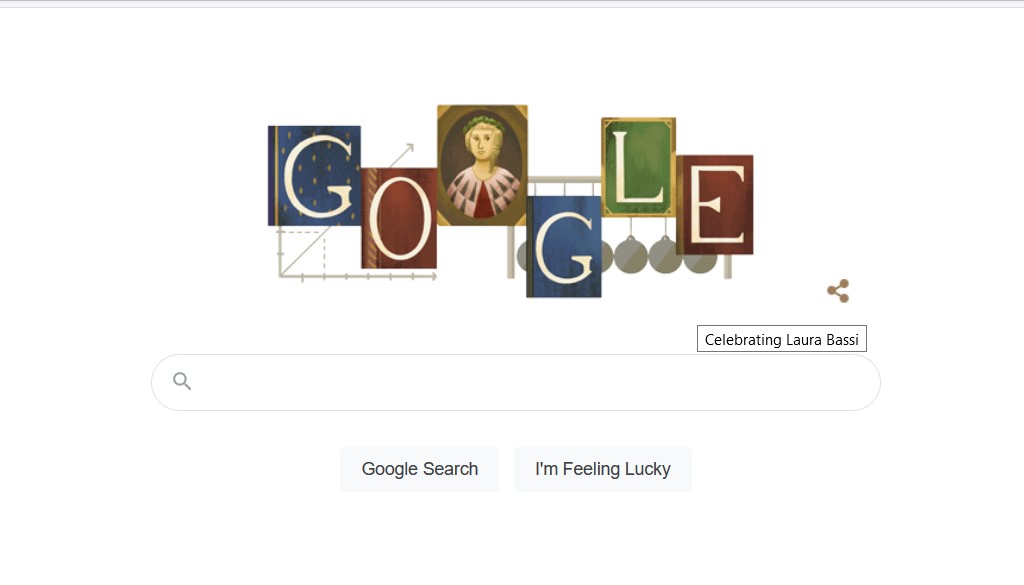 Today’s “Google Doodle” features Laura Bassi.  Laura Bassi has been featured in the Vatican Observatory Faith and Science Resource Center and in Sacred Space Astronomy.  Google does not mention her faith in their write-up, or the role of Pope Benedict XIV in supporting her and women in education.  Google writes,

Newton’s second law of motion states that an object’s acceleration is dependent on two variables: the force acting on the object and its mass. Apply this law to the momentum of women in science, and Italian physicist and professor—Laura Bassi—arises as a primary force for propelling scientific progress forward. On this day in 1732, Bassi successfully defended 49 theses to become one of the first women in Europe to receive a PhD.

Today’s Doodle celebrates Laura Maria Catarina Bassi, who was born in Bologna, Papal States (modern-day Italy) in 1711. A child prodigy, she was debating top academics on the history of philosophy and physics by 20; a rare achievement at a time in which women were largely excluded from higher education.

By 1732, Bassi was a household name in Bologna, and following her thesis defense, she became the first female member of the Bologna Academy of Sciences, one of Italy’s foremost scientific institutions. Due to gender discrimination, her position at the Academy was limited, yet she persisted. Bassi apprenticed under eminent Bologna professors to learn calculus and Newtonian physics, a discipline she spread across Italy for almost 50 years. A lifelong teacher of physics and philosophy, she complemented her education with innovative research and experiments on subjects ranging from electricity to hydraulics.

Bassi continually fought for gender equality in education throughout her trailblazing career; efforts that culminated in 1776 when the Bologna Academy of Sciences appointed her a professor of experimental physics—making Bassi the first woman offered an official teaching position at a European university.

Here’s to you, Laura Bassi!

Well, for more on this Catholic Scientist, click on the following from VaticanObservatory.org:

And click here for more Google Doodle scientists who have been featured on VaticanObservatory.org!

An Astrophysicist, a Book, Faith, and Science

History and Geology in the Land of St. Theresa