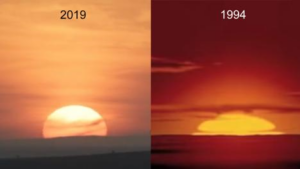 A month or so ago I was picking on the new “Lion King” movie for how unrealistic was its depiction of the night sky, despite everything else in the movie seeming so realistic in appearance.  Well, I have discovered another interesting critique of the “Lion King” sky.  It was on the WRAL (North Carolina) Weathercenter Blog.  There Tony Rice writes that

While the animals and landscapes in [the 2019 “Lion King”] are photorealistic, the sunrise that opens this shot-for-shot remake is less realistic than the hand-drawn original.

Rice compares the 1994 and 2019 versions of the movie, providing images of the sunrise from both, and noting how the 2019 version does not show the pronounced rippling effect that is seen in the 1994 version.  He writes:

In the 2019 [version] the sun is rounder, nearly white and emerges smoothly above the horizon. The 1994 version shows a deeper yellow, almost orange, more flattened sun rippling its way up.  The undulating effect seen in the 1994 [version] is gone in the latest version.  Those ripples are created by turbulent air rising upward.  This would be expected as the rising sun disturbs [and] heats the nocturnal boundary layer, air near the ground which has cooled and become very stable overnight.  Air turbulence is also what makes stars appear to twinkle at night.

So here we have another illustration of how the makers of the 2019 “Lion King” neglected the sky despite their other efforts at realism.  But something readers of Sacred Space Astronomy/The Catholic Astronomer might find especially interesting is that the rippling effect that Rice discusses here was discussed by a Catholic priest of the Society of Jesus and his student, more than four hundred years ago.  Fr. Christoph Scheiner and his student Johann Georg Locher wrote on just this effect in their 1614 astronomy book entitled Mathematical Disquisitions.  In discussing visible distortions of the disk of the sun, they wrote:

Click the image or click here to see the effect discussed by Rice, as well as Locher and Scheiner, as animated in the original “Lion King” movie.

Like Rice, Scheiner and Locher also talk about how these same properties of the air cause the twinkling of the stars.  Perhaps Scheiner and Locher would cut the 2019 “Lion King” a little more slack than Rice does; hakuna mattata, they might have said, supposing that the 2019 version’s sunrise is occurring after a long period of fine weather!  (Indeed, given Locher and Scheiner’s remarks about rain and fine weather, could it be that the 2019 version is actually the more correct for a drier climate.)  Isn’t it interesting that these two astronomers had this all worked out four centuries ago?