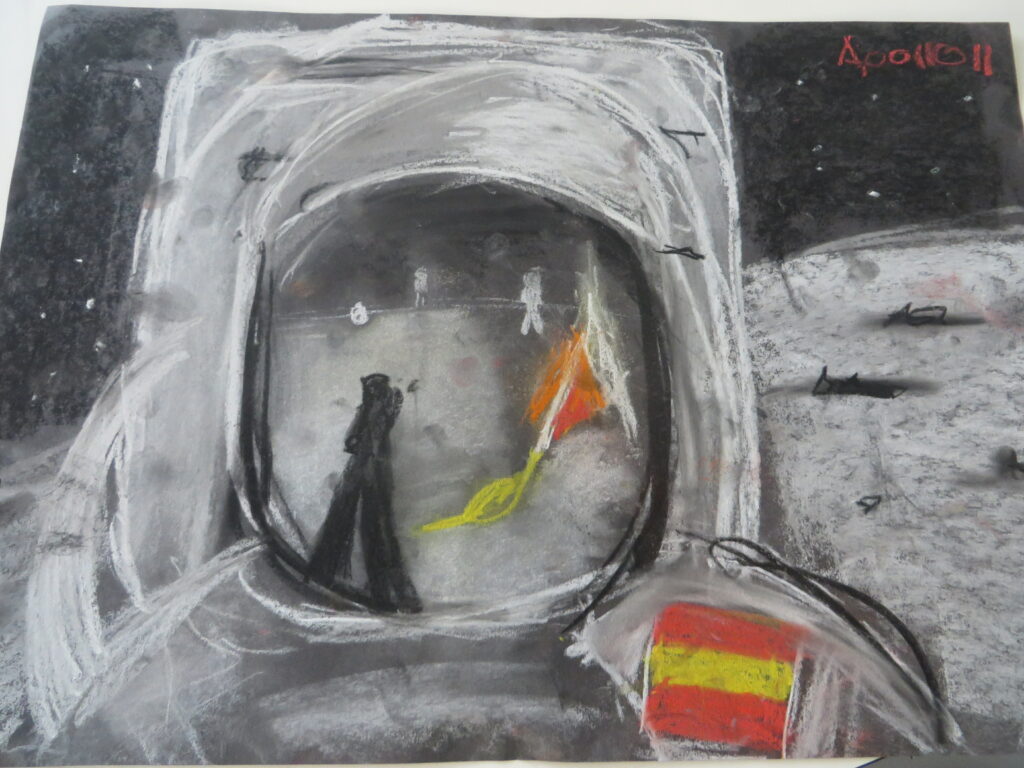 This is an excellent drawing of Buzz Aldrin on the moon. It shows his helmet and visor. The visor has the reflection of Neil Armstrong in it and also the shadow of Neil taking the image. This young person included their country’s flag on the spacesuit and in the reflection . Perhaps a vision of space exploration to come.

Recently I was invited to do two workshops at St Columba’s College in Dublin.  I decided to launch my new workshop  for 2018/2019 entitled, Let’s Go To The Moon –  Apollo 11 . The college was founded in 1843. The architecture is a cross-pollination of Victorian , Georgian and 21st century on a 140 acre setting on the slopes of the Dublin mountains. The day I visited the grounds were acutely swaddled  in snow,adding to the rich atmosphere of the place and its history. The phrase deep and crisp and even echoed in my head.

My workshops were part of the college Arts Week 2018. Attending were a mixture of primary school and first year second level pupils. The sessions took place in the beautiful new science building fully equipped for exploring the moon landing through drawing. The room has a lovely new 8 inch dob, which the science teacher will use to share the moon and other night time wonders  with the children.

July 20th 2019 will mark the 50th Anniversary of the first moon landing.  One of the most significant milestones in human space exploration to date.  As the moon landing took place when schools were on summer holidays, its immediate impact on education was dissolved somewhat.  In my mind memories linger of my disappointment at going back to school in September 1969. The moon landing  was never mentioned at all.  My teacher acted as it had never happened, whereas I expected to be informed and infused with the joy of its triumph.

My logic at launching this workshop a year early is precisely that the 50th Anniversary will be slap bang in the middle of the 2019 summer holidays. Therefore a preamble moving toward the anniversary is well justified given the short school year in the run up.  It is my wish to bring today’s children elements of this historical mission and hopefully instil some joy and wonder at this remarkable accomplishment from 50 years ago.

In other talks and workshops even up to five years ago , at least two or three children in a group of 30 would know the name of the first man who put his foot on the moon.  At least one of those children would be able to name Neil Armstrong and Buzz Aldrin. Occasionally I would come across a child who could name Michael Collins, about one in several  hundred.    However in the past year very few under ten-year-olds had ever heard of Apollo 11. Even fewer could offer  the names of the men who flew to the moon, placed their feet on the surface and their names in our hearts.

At St Columba’s College the young people who took part in my workshops had some small knowledge  about the mission, which was refreshing.  During the sessions they produced some excellent drawings , some remarkable , some funny, some with great detail in the short time available.  Their drawings are on exhibition in the college dining hall for all to view, admire and be inspired. A few drawings from the many created in the workshops are in the gallery below.