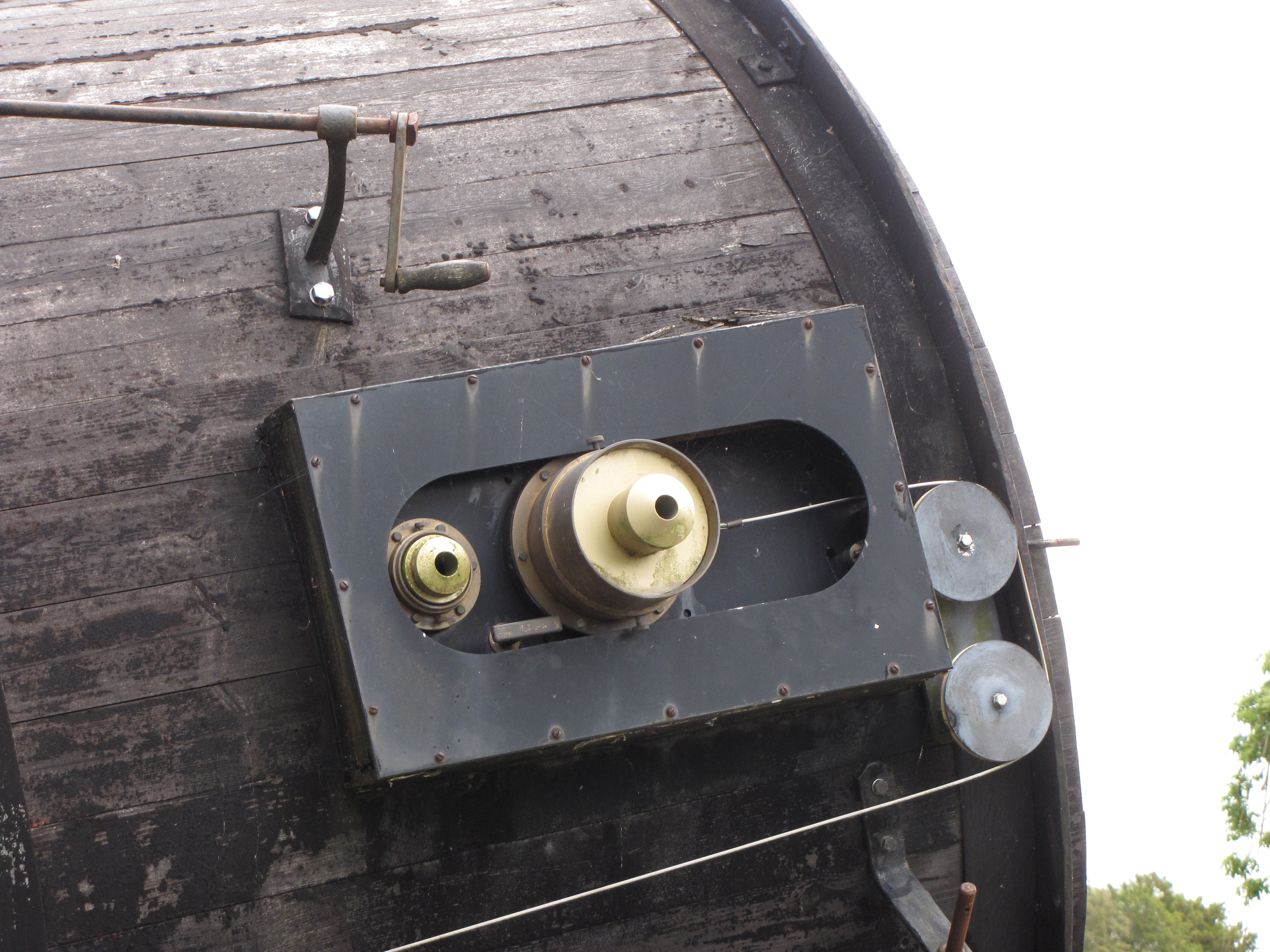 When I was a child I  was  brought to see the great Leviathan at Birr Castle Co Offaly.  The telescope was in a dishevelled state.  It’s tube was damaged , thorny brambles wrapped around it in a pending death grip.  It’s enormous walls stood tall over this broken wretched instrument . Once the biggest telescope on the planet, then no more than a pile of forgotten  timber. It was therefore  delightful many years later to visit the restored instrument. In recent times  I even got invited to take a ride in the wooden platform that brings observers to the telescope. Its giant eyepiece in my mind resembles the eye of a blue whale.

Today a new Leviathan has emerged at Birr Castle in the midlands of Ireland.  This one is know as I-LOFAR , it is a low frequency radio telescope. Its arrival announces  a whole new awakening in Irish astronomy. 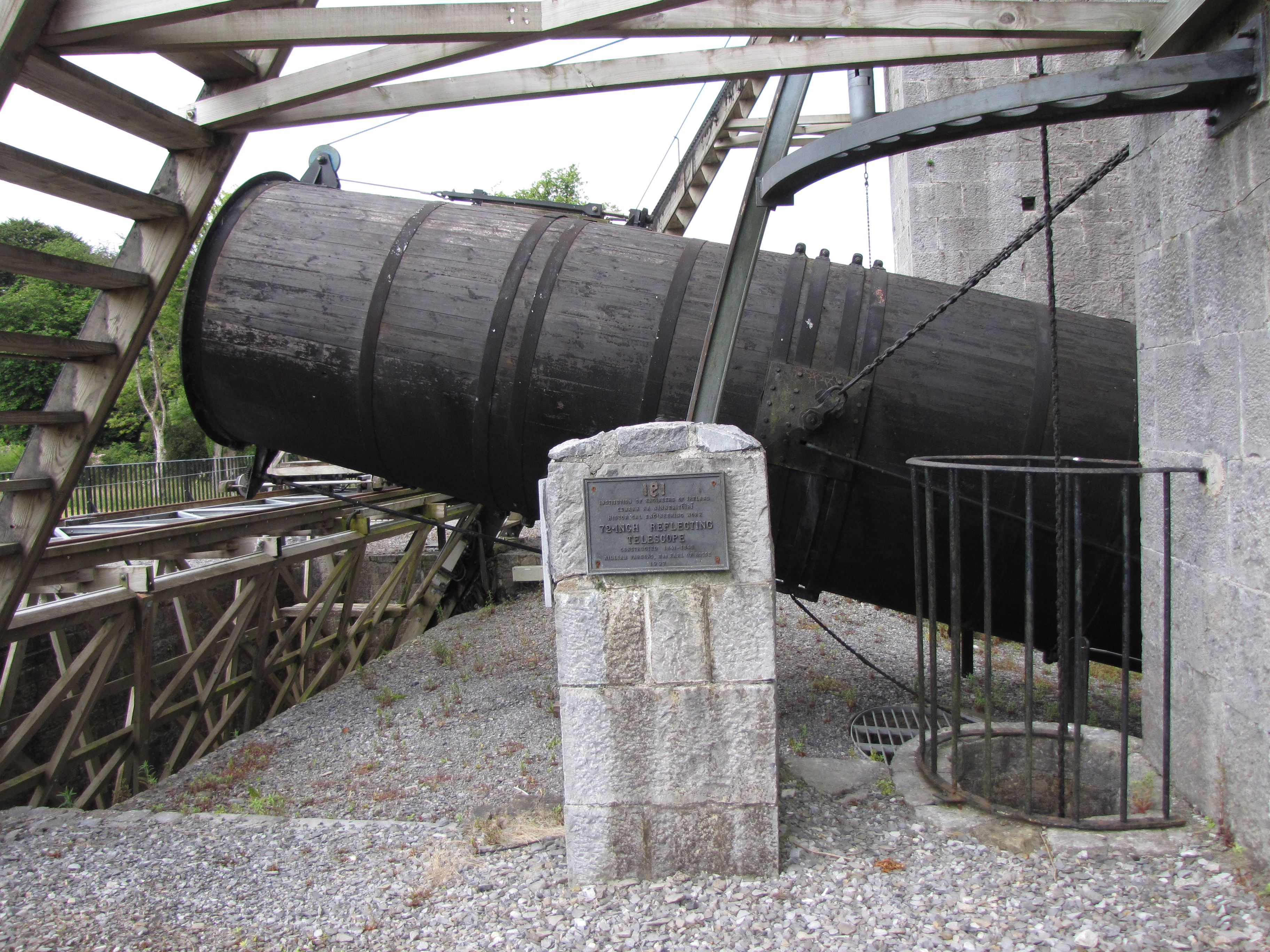 The Leviathan from the side – image Deirdre Kelleghan

The fact that the 54 foot  Leviathan tube is made of wood was to me always a concern  . In previous years I had seen  what the Irish climate does to wooden structures in the country side . My slightly wild  imagination suggested that this iconic telescope should be protected by the largest bell jar ever constructed.

Some years  after its restoration there was a problem with the hydraulics.  The telescope is now at a low angle to the ground and therefore has a very limited view with no movement.  Nevertheless it attracts thousands of visitors every year who stand in awe of its size , achievements and potential. 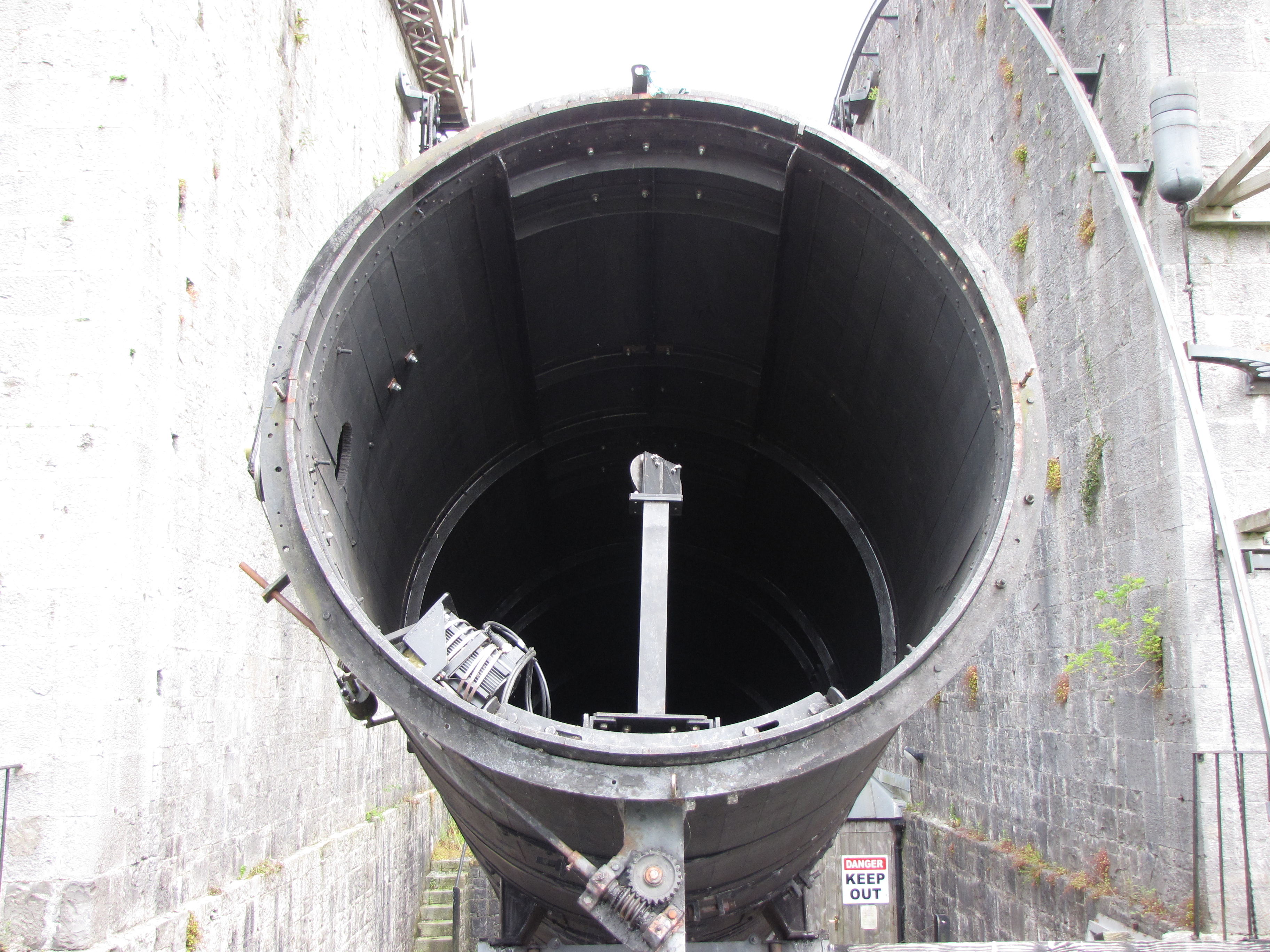 In February 1845 at  Birr Co Offaly the 3rd Earl of Rosse had just completed his enormous telescope.  It was in effect the Hubble of its time. The drawings of the spiral nature of galaxies  produced with the Leviathan are outstanding.  The construction  of this instrument sustained some of the  local population with work. During the years of the famine the Rosse family helped to feed the local community as did Agnes Mary Clerke’s  family in Co Cork.

The Irish famine took hold  in earnest during  September 1845 when the entire potato crop was destroyed by a fungus.  The vast majority of the poor in Ireland were totally dependent on the potato for life.  The disaster of the famine helped  shaped the country we live in today.

You do not have to walk far in the west of Ireland  today to find evidence of the 1845 Great Famine .  The stable food crop failed, starvation followed.  A  generation died in the fields and on the roads of this country.  Abandoned villages , and famine ravaged dwellings still dot the landscape. Potato drills are often found  in harsh settings particularly in the west . They exist in  almost impossible angles on the sides of mountains high above the wind battered landscape.  These scars on  the fields  are testament to the efforts made to extract sustenance from the land. Our ancestors  faced not only  challenges from their environment but also the rugged  political landscape of the time.

Should the telescope have been built while people were struggling to live ? questioned  Christopher  Graney in his recent blog.  The building of the Leviathan did not cause the famine, or add to its misery.  It was just like many innovations in exploration an instrument that happened to come into existence when the great hunger visited its green mouth on the people of the land. 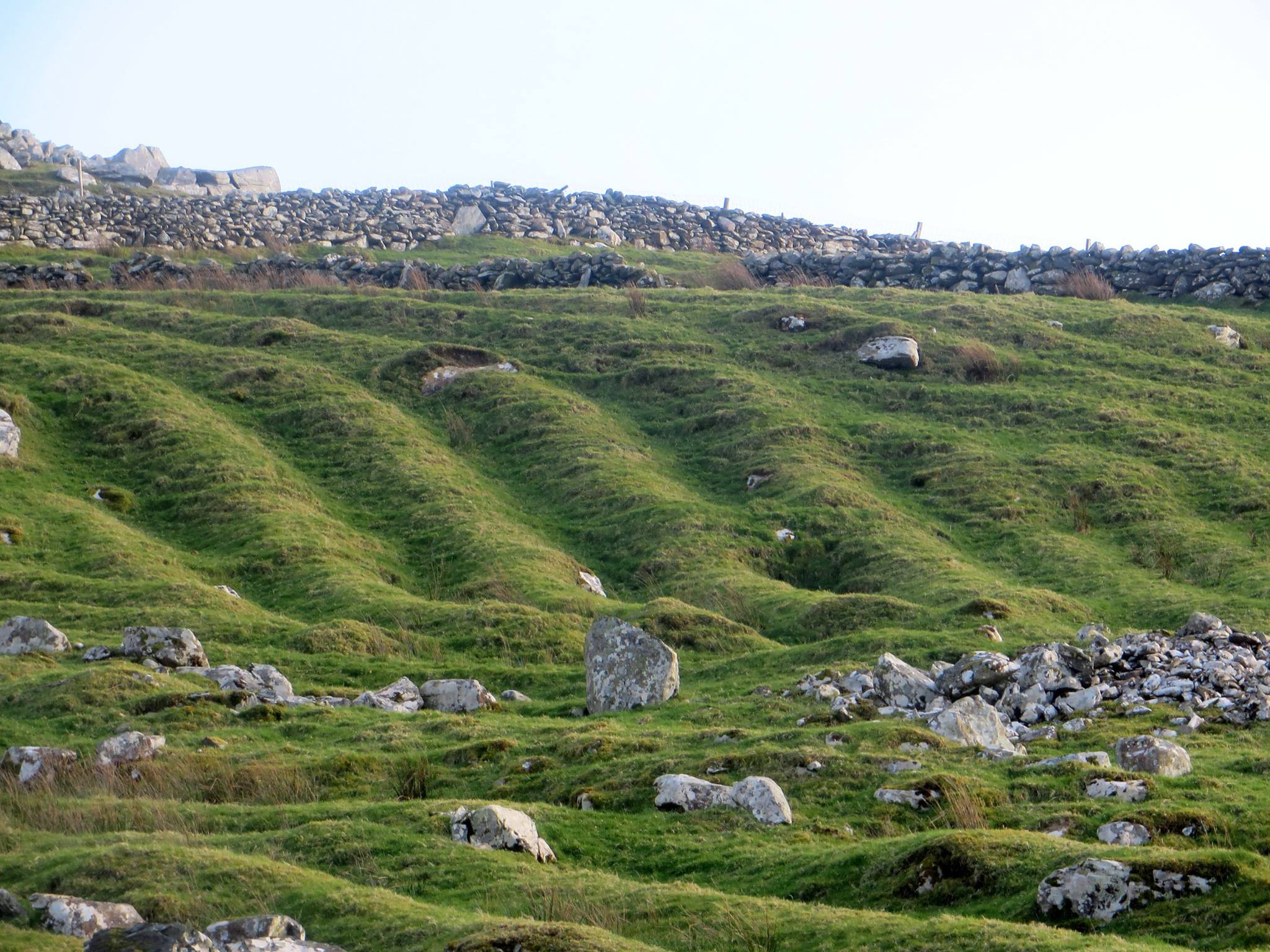 The ribs of our ancestors bursting the Earth
Still hungry after all these years.
Photo – Deirdre Kelleghan

Space exploration brings increasing understanding of who we are and where we came from . Our efforts to get a grasp of ourselves will never stop . It is built into our nature to explore, however  we may be only toddlers in our efforts from the ground or from space up to now.

We really should wake up and make sure everyone has enough to eat . There is no reason that I understand as to why we don’t make that a priority as well as continuing  our search for truth via the sciences. The population of Ireland was decimated by the famine and has not recovered to this day. However the Irish via massive forced emigration  have a diaspora of  millions all over the planet.  This country is still recovering in many ways from those oppressive times in our recent history.

As is often the case, adverse horrors suffered by one community brings out the best in humanity from other emphatic contemporaries. The Choctaw Indians from the American deep south on hearing of the plight of the Irish sent  $700 to help with the situation here amongst our people. The equivalent of tens of thousands of dollars today. 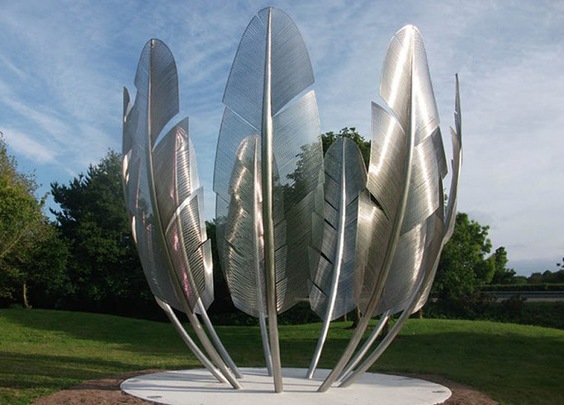 A huge mount of money and kindness rooted in their own Trail of Tears where the Choctaw also died from hunger. A beautiful gift from one culture to another. That  action has been commemorated by an equally beautiful sculpture now erected in Co Cork. .

I-LOFAR The new Leviathan in Ireland

This array was  recently installed at Birr Castle here in Ireland.  This new Leviathan   is playing its part in a European network. A symphony of low frequency sensitive antennae busily working away in its new home in the midlands of Ireland.  The instrument can detect bursts of radio waves from our Sun , helping us to understand Space Weather in a more accurate way. I-LOFAR ( Low Frequency Array)  will assist astronomers to detect exoplanets and will bring a massive explosion  of new knowledge to the world.  A new era of Irish astronomy to build on the legacy of the historical Leviathan. Professor Gallagher, Head of the I-LOFAR Collaboration and Associate Dean of Research at Trinity, said this about LOFAR.

“The Irish LOFAR radio telescope opens up a new era of astronomical research in Ireland and connects us to the leading network of radio telescopes in Europe. It will be used to study the early Universe, detect exploding stars, search for new planets and understand the effects of the Sun on the Earth. The huge volumes of data that the radio telescope will produce will require  us to develop new software and data analytics techniques to process and understand the data. I-LOFAR really is a test-bed for big data in Ireland. “