Where does life come from? Genesis describes life being created by God, who instructs living things to “be fertile and multiply” and fill the seas and land (Gen. 1:22, 28). But for much of history, scientists thought life came from the Earth itself. This idea was ancient, going back to at least Aristotle 2500 years ago. This theory of “spontaneous generation” (which has been featured in this blog before) said that matter possesses life-generating force. Small creatures could be spontaneously generated from dirt. Indeed, people claimed to see frogs forming from mud. The ancient Roman writer Pliny described this idea:

Aelianus said, that as he travelled in Italy near Naples, he saw many different frogs by the road, whose fore-parts and head did move and creep, but whose hind-parts were formed and like to the slime of the Earth. This caused the poet Ovid to write thus:

Dirt has his seed engendering frogs full green,
Yet so as feetless and without legs on earth they lie,
So as a wonder unto passengers is seen,
One part has life, the other earth full dead is nigh.

And a strange thing is seen in frogs. After they have lived some six months, they dissolve into a slime or mud—no one knows how. And afterward, with the first rains in the spring, they return again to their former state, in just the same way as they were once first shaped. What their first shape came from, no one knows. The way this happens is also unknown, secret, and beyond comprehension. Yet ordinarily it happens every year.

The ancient Jewish scripture commentary, the Mishnah, discusses whether dirt that generates a mouse would be unclean, since Leviticus 11:29 declares mice unclean: 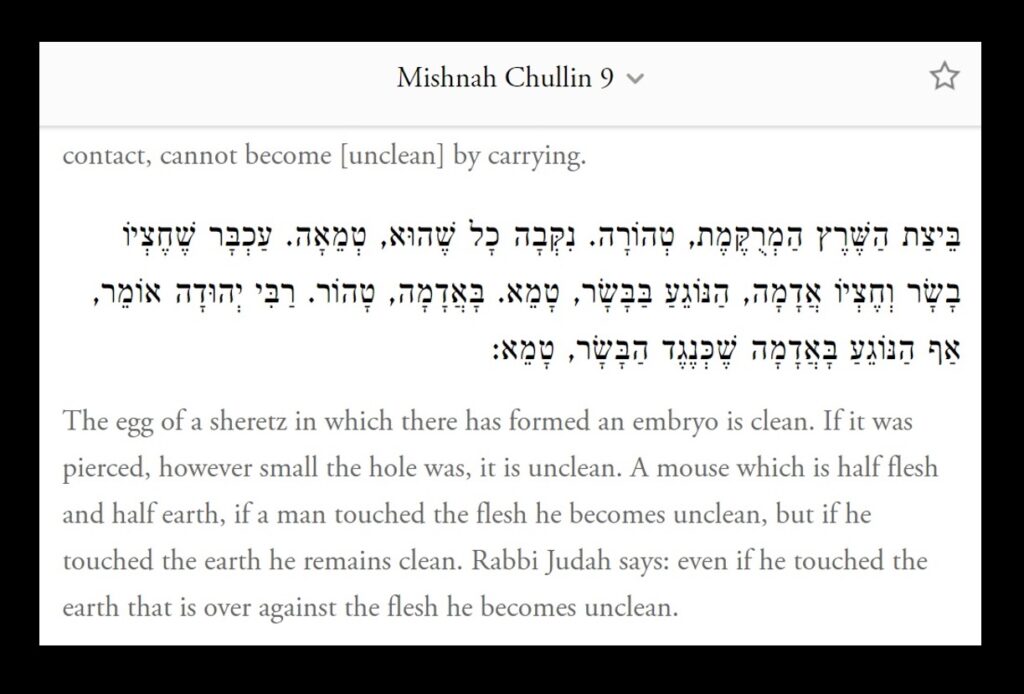 And therefore Parent Earth does justly bear
The Name of Mother, since all rose from her:
She now bears Animals, when soft’ning Dew
Descends; when Sun sends Heats, She bears a thousand new:
Then who can wonder now, that then She bore
Far stronger, bulky Animals, and more,
When both were young, when both in Nature’s Pride;
A lusty Bridegroom He, and She a buxom Bride?

People even published recipes for how to generate mice!

But some questioned the theory of spontaneous generation. One was Antony van Leeuwenhoek, who lived in the late seventeenth century. He was one of the first people to build powerful microscopes and to discover things like bacteria. Leeuwenhoek was amazed by the beauty and complexity with which God endowed the microscopic world:

In all the observations I have made, we can clearly see the incomprehensible perfection, the exact order, and the inscrutable providential care with which the most wise Creator and Lord of the Universe, has formed the bodies of these little creatures, which are so minute as to escape our sight.

At left is a portraint of Leeuwenhoek; at right are some of his drawings, including worms.

Leeuwenhoek was right, but the theory of spontaneous generation did not die quickly. For example, in 1884, two centuries after Leeuwenhoek, the German botanist Carl Nageli proposed that single-cell organisms could be spontaneously generated, and over time evolve into more complex organisms. But Nageli was a late hold-out. The fact was that no one could ever reliably observe any spontaneous generation. The recipes did not work.

Today scientists believe that all living things are fertile and multiply. Nothing just spawns from the mud. Not single cells. Not microscopic worms. Not frogs. Not mice. And not people. That is good. Spontaneous generation is a theory that opens the door to some ugly ideas. Lucretius said that Earth also randomly spawned countless monsters—headless or mouthless creatures that could not survive:

Besides: the Earth produc’d a num’rous Train
Of Monsters: Those her Labor wrought in vain:
Some without Hands, or Feet, or Mouth, or Eyes;
Some shapeless Lumps, Nature’s Absurdities;
Dull, moveless Things, and destitute of Food,
Which could not fly the Bad, nor choose the Good.
A thousand such in vain arose from Earth;
For Nature, frighted at the ugly Birth,
Their Strength, and Life to narrow Bounds confin’d;
Deny’d them Food, or to increase their Kind:

Spontaneous generation allows for the possibility that some people are true human beings, while others are inherently lesser—the descendants of monstrosities. But according to Genesis, all people are of one family, all “sons of Adam and daughters of Eve”.

Science today agrees that all people are of one family. If, because of something you heard about Galileo or Darwin, you think that science is in conflict with religion, reconsider. The challenges science has posed to Genesis regarding details of where the Earth is (Galileo) or how the one human family came to be (Darwin) are minor quibbles compared to science’s rejection of spontaneous generation.

(This post is an expanded version of a “Science in the Bluegrass” column I wrote for The Record, the newspaper of the Archdiocese of Louisville, Kentucky.)

For those readers who are interested, here is the entire section on the formation of life from the Earth as told in Lucretius’s Of the Nature of Things, translated into English Verse by Thomas Creech, 1714:

Now let’s descend again to new-born Earth,
And find to what she gave the soonest birth:
What sort of Beings, which of all the Kinds
She first durst venture to the faithless Winds.
She, first of all, green Herbs, and Flow’rs did yield
And spread a gawdy Green o’er all the Field:
And next the Tree, with spreading Branches, shoots,
But closely fixt, and bound with steady Roots.
As Bristles, Hairs, and Plumes are first design’d
O’er Limbs of Beasts, and o’er the winged Kind;
So new-born Earth with Herbs and Trees began,
And then by various Ways bore Beast, and Man:
For Heav’n, ’tis certain, did not fashion all;
Then let the various Creatures downwards fall:
Nor Seas produce an earthly Animal.
And therefore Parent Earth does justly bear
The Name of Mother, since all rose from her:
She now bears Animals, when soft’ning Dew
Descends; when Sun sends Heats, She bears a thousand new:
Then who can wonder now, that then She bore
Far stronger, bulky Animals, and more,
When both were young, when both in Nature’s Pride;
A lusty Bridegroom He, and She a buxom Bride?
First, of all Animals, in teeming Spring,
The Feather’d Kind peep’d forth, and clap’d their Wing:
As even now our tender Insects strive
To break their Bags, get forth, and eat and live,
Next Beasts, and thoughtful Man receiv’d their Birth:
For then much vital Heat in Mother Earth,
Much moisture lay: And where fit Place was found,
There Wombs were form’d, and fastend to the Ground:
In these, the yet imperfect Embryo’s lay,
Thro’ these, when grown Mature, they forc’d their way,
Broke forth from Night, and saw the cheerful Day:
Then Nature fashion’d for the Infant’s Use
Small Breasts in Earth, and fill’d with Milky Juice:
Such as in Women’s Breasts she now provides
For future Infants: thither Nature guides
The chiefest Parts of Food, and there they meet
Fit Ferment, there they grow both white and sweet:
Earth gave the Infants Food; thin Mists were spread
For Clothes; the grassy Meadows gave a Bed.
The Earth, when new, produc’d no raging Cold,
No Heats, nor Storms: These grew, as she grew old.
Therefore our Parent Earth deserves to bear
The Name of Mother, since All rose from Her.
Thus for a certain Time Mankind she bore,
And Beasts, that shake the Wood with dreadful Roar,
And various Kinds of Birds; and as they flew,
The Sun, with curious Skill, the Figures drew
On all their Plumes: he well the Art might know,
He us’d to paint the like on his fair Bow.
But weary’d now, and tir’d by length of Time,
The Earth grows old, and weak; as Women past their Prime.
Time changes all; and as with swiftest Wings:
He passes forward on, He quickly brings
A diff’rent Face, a diff’rent Sight of Things:
And Nature alters: this grows weak, this strong,
This dies, this, newly made, is firm and young:
Thus alt’ring Age leads on the World to Fate:
The Earth is diff’rent from her former State:
And what in former Times with Ease She bore,
Grown feeble now, and weak, She bears no more,
And now does that She could not do before.
Besides: the Earth produc’d a num’rous Train
Of Monsters: Those her Labor wrought in vain:
Some without Hands, or Feet, or Mouth, or Eyes;
Some shapeless Lumps, Nature’s Absurdities;
Dull, moveless Things, and destitute of Food,
Which could not fly the Bad, nor choose the Good.
A thousand such in vain arose from Earth;
For Nature, frighted at the ugly Birth,
Their Strength, and Life to narrow Bounds confin’d;
Deny’d them Food, or to increase their Kind:
For that one Pow’r a thousand Things requires;
Almost as many as its own desires:
There must be Food, and Seed, and Organs fit
For flowing Seed, whilst all the happy Night
The Body lies dissolv’d in soft delight;
That Male and Female may their Pow’rs imploy,
They must have Organs fit for mutual Joy.
But more: these Years must num’rous Kinds deface;
They could not all preserve their feeble Race:
For those we see remain, and bear their young,
Craft, Strength, or Swiftness has preserv’d so long.
Many their Profit, and their Use commends;
Those Species Man preserves, kind Man defends.