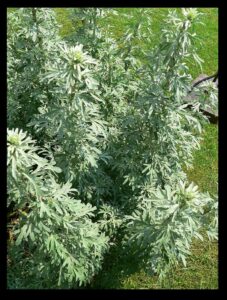 “Is the Vatican Observatory searching for the star called Wormwood from the Book of Revelation?”

This question was asked during the Q&A session that followed a talk about the V.O. given by one of the members of the Vatican Observatory Foundation’s Board of Directors.

Those who hear “wormwood” and think of an herb, sometimes found in soaps and teas, simply are not keeping up with all the latest from the Internet.  Here is the portion of Revelation, from the 8th and 9th chapters, where Wormwood makes an appearance (King James Version):

Obviously a lot of stuff is falling to Earth in these verses—hail, fire, blood, a burning mountain, and a couple of stars.  Anything involving the sky and this much catastrophe is sure to have a following.  Phil Plait, who was in the graduate program in astronomy at the University of Virginia when I was there, wrote a book with the title Death from the Skies!  I think it sold pretty well.  And if sky-plus-catastrophe is sure to have a following, it is absolutely certain to have a following on the Internet.  Indeed, a bit of searching reveals that some folks have spent a fair bit of time spinning up “Wormword” material on the web.

Just a bit of what an image search on the Wormwood star from the Revelation turns up.

When you consider that, prior to the development of Copernicus’s heliocentric theory, any permanent light in the sky was a “star” (including, for example, the five planets visible to the naked eye), the “trumpets” passage from Revelation does sound like perhaps it might be a description of a pretty devastating meteor bombardment.  And so perhaps the person who asked the “Wormwood” question was wondering if the Vatican Observatory is busy with a kind of scripturally-inspired search for asteroids or other bodies that might be “Wormwood” and its various Companions of Doom.

That’s not a crazy idea.  Big meteors have hit in Siberia, and in Arizona.  A really big meteor strike is thought to have caused the extinction of the dinosaurs.  Astronomers all over the world watched a comet hit Jupiter in 1994.  Plait even has a TED talk on this stuff:

Indeed, another guy I went to school with, Tim Grayson, once did research on building a telescope to search for faint objects that might strike Earth.  He wrote a paper on the subject, published in 2002: “Curved Focal Plane Wide Field of View Telescope Design”—a paper that has been frequently cited since (“frequently” as such things go).  But, Grayson worked for DARPA at the time—the Defense Advanced Research Projects Agency—not for the Vatican.  He works for DARPA now, too, as the director of its Strategic Technology Office.  Considering that DARPA’s budget for 2019 is $3.427 Billion, it is a reasonable bet that in a few days at work Grayson goes through as much money as the V.O. spends in a year on its Italian and American telescopes combined.  Moreover, NASA has had a program to search for “Near Earth Objects” (“NEOs”) for some time.  According to NASA, in 1998 the agency established a goal “to discover 90% of the NEOs larger than one kilometer in diameter and in 2005, Congress extended that goal to include 90% of the NEOs larger than 140 meters”.  NASA does have a “Planetary Defense Coordination Office” that is in the business of worrying about NEOs.  Moreover, in June of last year the White House released a “National Near-Earth Object Preparedness Strategy and Action Plan” and proposed boosting NASA’s budget for this to $150 million.  With that budget, NASA will be spending more money in a few days, just on NEO’s, than the V.O. spends in a year. 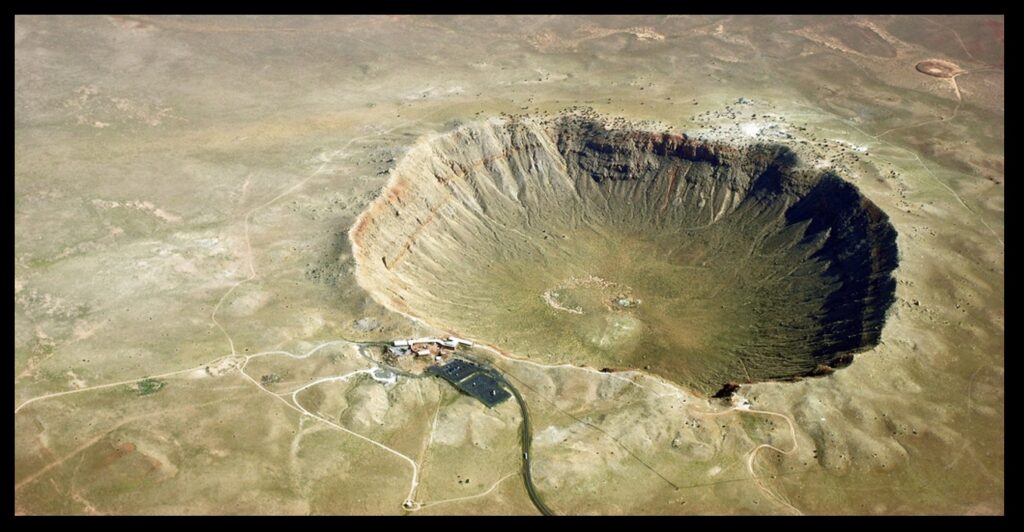 Meteor Crater in Arizona.  From a NEO that got a little too close, releasing a few megatons of energy when it hit.  Note the road and the parking lot in the foreground.  Photo from Shane Torgerson, Wikimedia Commons.

Therefore, if the person asking that “Wormwood” question was supposing that Revelation is describing an actual natural phenomenon—an Earth-threatening storm of meteors/asteroids—and wondering if someone could search for that, the answer is obviously “yes”.  But the V.O. is not really the observatory with the budget for that sort of thing.

However, let’s read further from this passage in Revelation.  It quickly becomes clear that an actual natural phenomenon is probably not what Revelation is describing:

And he opened the bottomless pit; and there arose a smoke out of the pit, as the smoke of a great furnace; and the sun and the air were darkened by reason of the smoke of the pit. And there came out of the smoke locusts upon the earth…. And the shapes of the locusts were like unto horses prepared unto battle; and on their heads were as it were crowns like gold, and their faces were as the faces of men. And they had hair as the hair of women, and their teeth were as the teeth of lions. And they had breastplates, as it were breastplates of iron; and the sound of their wings was as the sound of chariots of many horses running to battle. And they had tails like unto scorpions, and there were stings in their tails: and their power was to hurt men five months. And they had a king over them, which is the angel of the bottomless pit, whose name in the Hebrew tongue is Abaddon, but in the Greek tongue hath his name Apollyon.

If the person asking that “Wormwood” question was supposing that Revelation is not describing a natural phenomenon—if the question was whether the V.O. was searching for the supernatural, in other words—then the question makes no sense.  A telescope at an observatory detects natural phenomena.  There is no reason to suppose that any telescope is of any use in detecting a supposedly supernatural “star” that descends to Earth, prompting the opening of a pit that spews forth horse-shaped, man-faced, lion-toothed, scorpion-tailed, iron-armored locusts.  That would be like supposing that a balance would be of use in measuring the weight of angels, or that a graduated cylinder would be of use in measuring the quantity of blessings.

Of course, maybe the person asking the “Wormwood” question was supposing that the “star” that descends to Earth and prompts the opening of a pit that spews forth horse-shaped, man-faced, armor-wearing locusts is in fact describing … a SPACECRAFT! … that descends to Earth and unleashes a horde of horse-shaped, man-faced, scorpion-tailed alien warriors!  Oh, how cool is that?  It sounds like something from an “Avengers” movie, does it not?  But if that is the case, then we’re back to talking about a natural phenomenon again—a physical thing approaching Earth.  And in that case, DARPA and NASA have the V.O. beat, as we have seen. 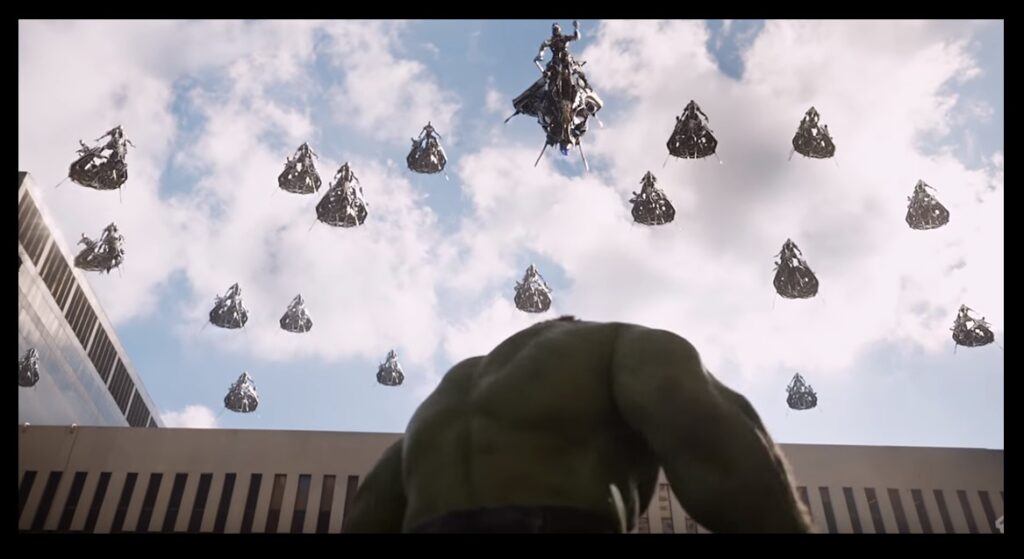 Avengers: The Incredible Hulk battles the armored hordes from the sky!

The astronomical research that the Vatican Observatory does, and that most astronomical observatories do, is far more nerdy and far less glamorous than all this.  Most observatories are not seeking out Near Earth Objects that might collide with Earth.  Without a doubt, collisions with Earth make for entertaining talks—and no, they are not just a matter of fantasy.  However, the overwhelming bulk of what know about the universe comes from astronomers doing nerdy research that lacks much glamour and entertainment value.

Click here or here for a couple of posts about actual research done with the Vatican Advanced Technology Telescope, or VATT.  At these posts you can learn about such glamorous work as “High Resolution Optical Spectroscopy of the Classical Nova V5668 Sgr Showing the Presence of Lithium”, or “Discovery, observational data and the orbit of the Transneptunian object (420356) Praamzius”, or “Heterodyne Interferometry with a Supercontinuum Local Oscillator.”  It isn’t part of The Planetary Defense, but it is valuable astronomical work. 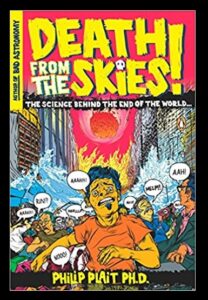 Science that is not boring.

I think we astronomers have to accept some blame for questions like “are you looking for Wormwood?”  Astronomers put a lot of effort into telling people about exciting, dynamic stuff—stars being born! stars dying! worlds and galaxies in collision! change! chaos! excitement! Things Blowing Up!!!  Better yet—THINGS BLOWING THE EARTH UP!!!!  We all want science to catch people’s attention.  We don’t want science to be boring.  Exciting, catchy things get lots of emphasis in popular science.  After all, who is going to listen to a TED talk about Heterodyne Interferometry, Lithium in classical nova V5668 Sgr, or Transneptunian object (420356) Praamzius?  Scientists play a part in all this, so we should not be surprised that so many people are interested in Death from the Skies.

That said, however, the VATT indeed does do some NEO work.  Check out “The Four-Color Broadband Photometry for Physical Characterization of Fast Rotator NEOs”.  And Larry Lebofsky has written about using the VATT to look for NEOs in a recent post.  If NASA paid a call to V.O. Director (and Boss of this Blog) Br. Guy Consolmagno, S.J., and asked if the V.O. would do more NEO work if NASA provided the funding, I doubt that he would turn them down.  After all, Br. Guy is an asteroid/meteor guy.  And what is more, he is a real science fiction nerd who would love being part of The Planetary Defense Action Team.  And maybe they could even call that work “Project Wormwood”.  It’d keep the Internet abuzz, at any rate.