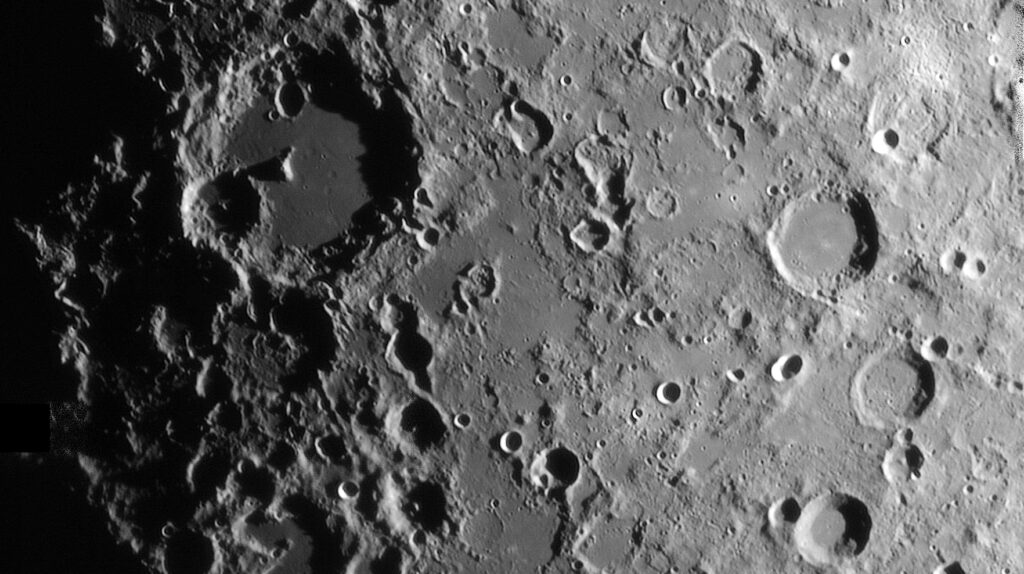 Here we have a very crater saturated region of the southern highlands. This image’s largest crater, to the upper left of center, Albategnius (139km dia.) is just short of 4 billion years old. It has a strange off-center central peak with a summit crater, casting a nice shadow on the western side of the crater floor towards the ragged crater Klein (46km). Albategnius has a number of shallow saucer-like craters on its floor that disappeara with higher sun angles. Below Klein is the heavily eroded but larger crater Parrot (121km). Normally, with higher sun, this crater is not so obvious. To the right of Parrot is the very identifiable Vogel (27km) which is the center, largest crater in a nearly vertical row of 4 craters. Below Vogel are two more A-craters, Argelander (36km) above and Airy (37km) below. Look at the sunlight just catching the tip of the central peaks in these craters! Notice the long gashes that stretch from the upper left diagonally to towards the middle of the bottom of the image. These gashes are over 100km long and were carved out in seconds when city sized “rocks” where blown out from the Imbrium impact and ploughed their way across the lunar landscape! These are found in many places on the moon.This impact must have been a breathtaking sight…from a safe distance!

On the right side of the image are three larger craters. The largest just above the mid-line of the image is the flat floored Abulfeda (65km) another of our A-craters. Below it is another flat floored crater, Almanon (51km) and the bottom one is Geber (46km). Notice the beautiful catena between Abulfeda and Almanon, a line of secondary craters laid out when ejecta was laid down after and impact. It does point back to Albategnius so perhaps that was the origin of the material. Then lastly, just above the center of this image is a pear-shaped crater, Abulfeda D (20km). Look at the interesting shadow on the floor of this crater hinting of a deep gap in the eastern wall of this crater. The odd feature, looking for all the world like a lava flow from a flooded crater that ruptured to the south. Certainly this is is worth scrutiny on a good seeing night!