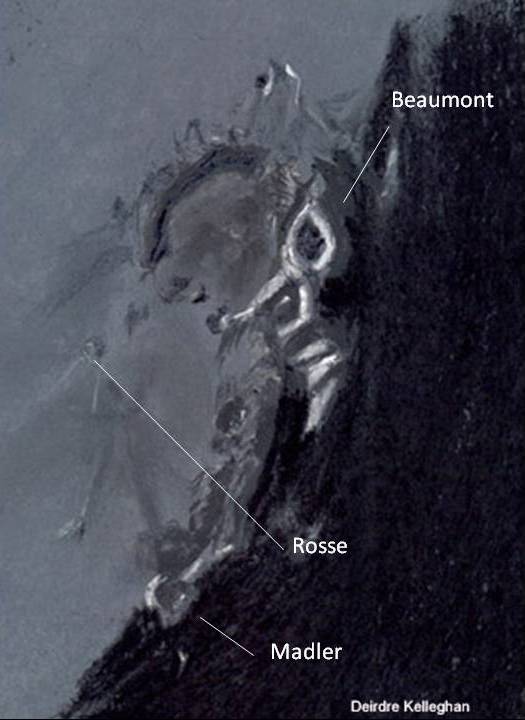 Many astronomers are less than fond of the moon because its reflected light takes away from their deep sky observations and imaging. Both the moonless and the moon full renditions of the sky are relished by me for different reasons. The deep dark sky for comets and messier objects, our moon for its outstanding contrast and intricate detail. My attention is captured by the interaction of sunlight with the rugged landscape.

It is often difficult to choose what feature of the moon to draw when your field of view sometimes offers several exquisite potentials. The theatre of the moon is almost impossible to ignore.

Back in May 2007 I had a loan of a pair of binoviewers this sketch was the result of trying them for the first time. I was looking at the moon from around 20:00 as I was keen to see what they could do. Oh boy !!! what a view, really extraordinary, even though the seeing not as good as it could have been. I looked at Vallis Rhetia Wow !! its long alleyway bent toward me offering a superb almost tangible target.

Petavius close to the limb was also tempting , its central mountain was jutting up like sticks in a fire. What can I say, the drama of the terminator called, it seemed to say to me  “Fracastorius is doing a powerful light show with some of its close by craters.”  Fracastorius D, H and Beaumont were presenting like a series of vertebra arching into the darkness. I was both mesmerised and motivated to capture this on paper with my pastels and etching tools.

A wonderful visual effect was created by this instrument. My two eyes observing together enhanced the view in a unique way. Toward the end of my session , the seeing became steadier and the floor of Nectaris revealed some subtle variations in greys and lines so I gave it some attention. I etched away side walls of this enclosed plain to bring more depth to the drawing. As I had spent so much time observing and drawing the action on the terminator I hardly gave an effort to Rosse crater . Its circular nature is barely etched into Mare Nectaris where as its human namesake Sir William Parsons (3rd Earl of Rosse) is deeply entrenched in Irish astronomical history. Fracastorius itself is a lava filled horse shoe shaped walled plain, named after an Italian doctor . Madler is named for Johann Heinrich Madler who interestingly was an author of the first map of Mars and a map of the moon. Beaumont named after a 19th century French geologist .

At ALCON 2009 in New York (Astronomical League Convention) I bought myself a lovely set of binoviewers. They are really outstanding for both lunar and solar drawing especially if there is a large filaprom on the limb.
You can catch Fracastorius and its surrounding spectacle five days after new moon or four days after full moon. A small telescope or binoculars will show it to you, as always aperture is king.