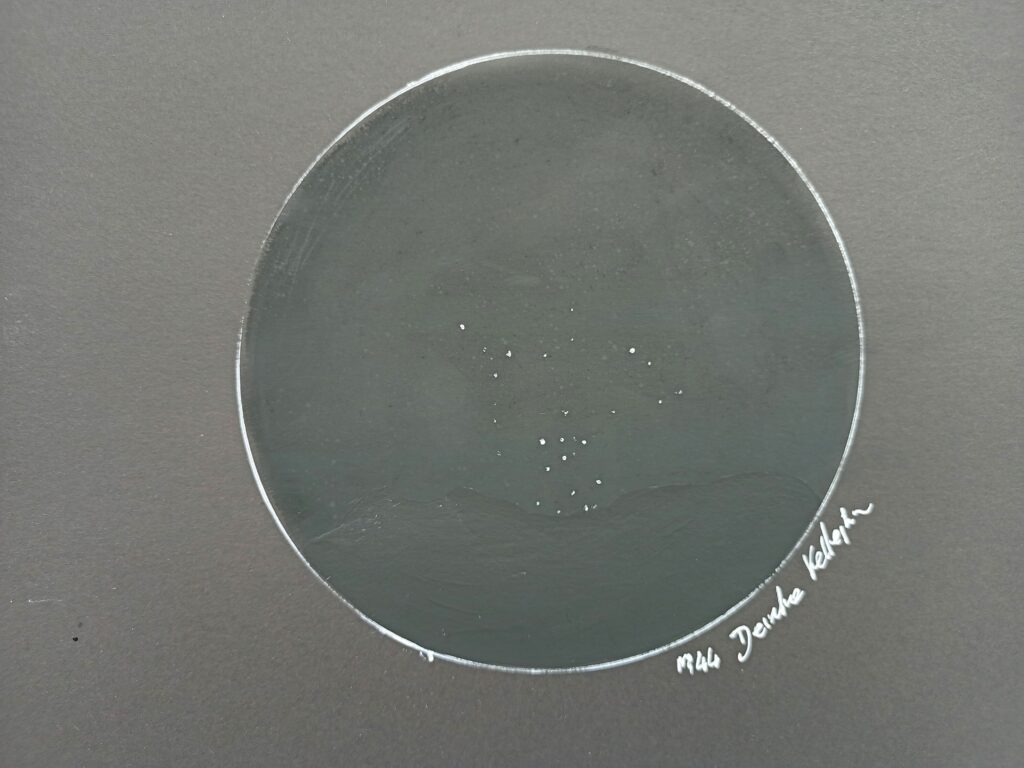 On January 4th, I noticed it was clear early in the evening. For some time, I have wanted to see 67P / Churyumov Gerasimenko; however, the weather had other ideas. So being forever hopeful, I set up my 15×70 binoculars for a scout around. After a short time, I noticed M44, the Beehive Cluster rising above Killadoon Hill. This close group of stars appeared to be almost sitting on the edge. Out came the telescope to see if I could locate the comet, yes !!! A faint smudge, almost at the same moment clouds had rushed in to cover the entire sky as they often do here in the west of Ireland. It was not my first time observing M44, but I had never sketched it before.
The image of M44 resting on the top of the hill was etched in my mind. It was so otherworldly, touching the planet visually and touching me with its shape and beauty. From my view, this conjunction of stars and a specific part of the Earth just about 300 metres from me was superb.

On January 5th, it was crystal clear again in the early evening. A stunning sky with pluckable stars. It was icy with a wind to chill the bones. A black cloud bank appeared on the western horizon. I decided to forget about 67P and try for the rising cluster. You have to take any opportunities here. It’s not easy to plan. It’s a take what you can get astronomy set up here. Out came the binoculars, and we waited for M44. There was no mistaking those bees as they peeped over the ridge. The cluster looked so magnificent that it deserved an orchestra to play them in on the mountain. Lots of brass and a few thumps on the kettle drums.

The circle was pre-prepared. It is a white gel pen circle filled in with black pastel. As you can see, the black pastel is blacker than the paper. Firstly, I drew in the profile of the hilltop in pencil. The cluster was framed by a slight dip in the hill’s profile. I added the stars closest to the top of the ridge first. Then that distinctive triangular shape was followed by other bright stars in line with that triangle to the left and right above it. Then by dimmer stars that had a specific form. Many stars were not included because my fingertips turned white and numb with the cold. However, I think I included enough Beehive members to make it recognisable.
After a tasty bowl of stew, I used some black gesso to paint over the hill area in the drawing. This was in order to make the black edge stand out from the night sky. Later on, I took a look outside but alas, the cloud doors had shut the sky down for the night. Obviously 67P awaits another time.