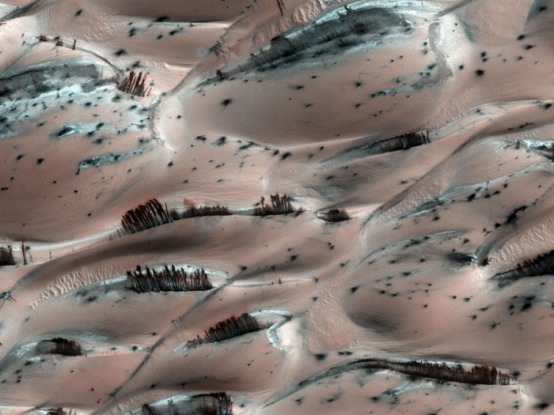 Dark sand emerging on the surface of the red planet as some of the ice covered dunes melt in the warmth of the spring sunshine. Credit: MRO

When I first saw this image I thought it looked like petrified trees dotting the surface of Mars. Likewise the image could be  microscopic hairs on strange skin:-) However this amazing image is, in fact, a photograph which shows dark sand emerging on the surface of the red planet. This is  as a consequence of some of the ice-covered dunes melting in the warmth of spring sunshine.

This classic view of Mars was taken by HiRISE one of the most incredible cameras working in space. The camera rides onboard the Mars Reconnaissance Orbiter. It subsequently produces feasts of data and true beauty to share with all of us.

Earlier this  week I found a lovely NASA poster in my outreach box. It compares Mars to Earth in their similarities and differences. My grandson was fascinated by both planets even though he is only 3 and a half. We had a great chat about it all. As a result the session brought some memories of painting Mars blended with hints of the Earth.

As an artist, I am totally fascinated by the surfaces of other worlds.  Images taken by the solar system explorers are very inspiring. Many of my canvases emerge directly from my observations of a tiny fraction of an image or are influenced by an entire object.

My painting Mars Earth Merge is  directly influenced by  space images in tandum with  my observations of surfaces on Earth. Keel Beach in Achill Island, Mayo, is one of my favourite places to walk. It is  six kilometres long, with a constant roar from the Atlantic waves.  In addition to walking there I enjoy taking macro images of the sand.   Observing how the rough sea makes channels in the sands delicate softness also captures my attention.   Generally the markings are delta-shaped, water etched, well defined, but fine. On Keel sometimes the wind whips up dry sand and sends it at great speed to wrap itself around rocks on the wet sand. 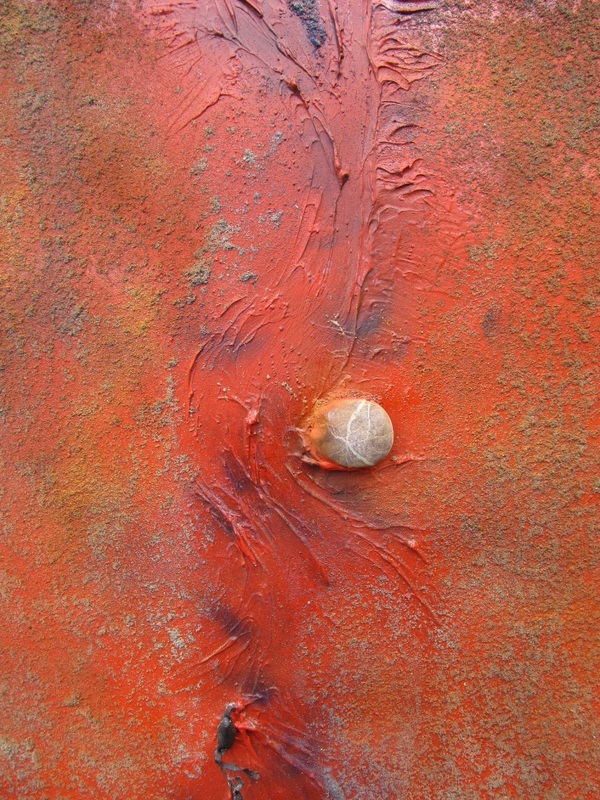 This painting started as a depiction of those sand deltas on Keel. As it developed I had the idea to use Martian colours often associated with  MRO HiRise Images. I used pallet knives to merge Earth-style water erosion on a beach scale with long-gone water erosion on Mars which is on a larger scale.

Furthermore, I developed the link by adding a beach stone and lots of sand in layers on each side of the Mars / Earth delta. The sand I used was too perfect therefore I had to enhance it by introducing particles of pastel in yellow, and orange to give it some depth. The addition of a little seaweed gave a 3 D kick to the work.

Here are a few images from those walks that led to my painting.