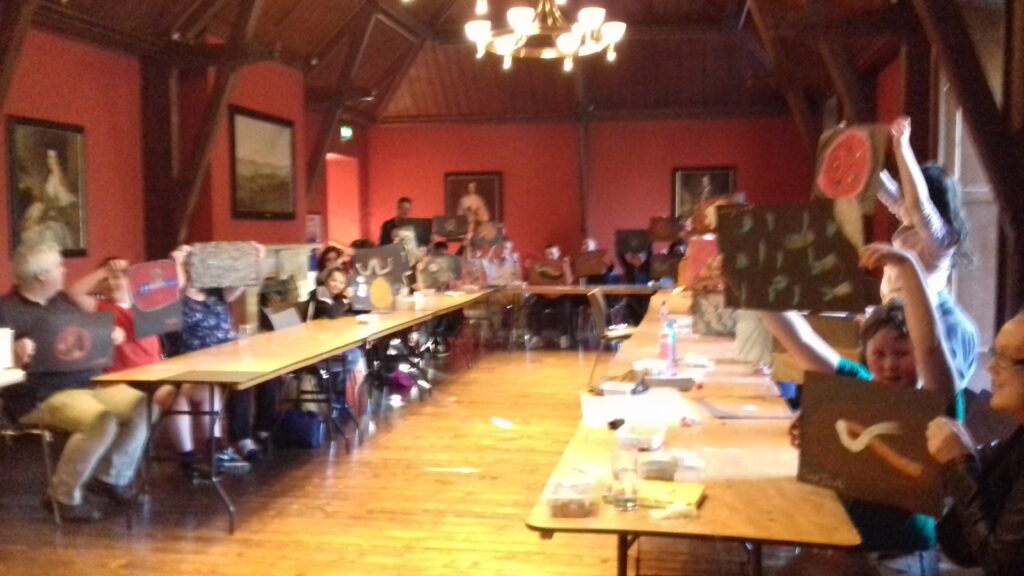 Marvellous Mars drawing workshop at Castletown House Co Kildare Ireland. 42 drawings based on images from the planet Mars. All toward understanding the planet and the ongoing explorations.

For several years now I have been visiting Castletown House doing workshops for families. Mams, dads, granny’s, grandad’s and kids all working together. Everyone  learning together about planets and space missions. This year however COVID 19 has prevented that happening so far. So here is one from May 2018, my Marvellous Mars drawing workshop.

Castletown House is a Georgian palace set in a magnificent landscape in Co Kildare. The building is full of grace and elegance of times long past. That splendour coupled with all that is required of a building for public events makes Castletown House a special place. It was a pleasure to be invited to do a workshop in this excellent venue. Particularly timely as it was on the eve of the launch of NASA’s InSight mission. The evening was set up for my Marvellous Mars drawing workshop. The audience were families, mams, dads and children, a perfect combination.

It was beautiful, with late warm sunshine, a powder blue sky over the greenest of green trees. Flowers, shrubs and land stretching out over 120 acres that seemed to go on forever It occurred to me that perhaps my audience might be small due to the pleasant weather and bank holiday. However, 42 people arrived, sat down and participated with lots of energy.

This activity was born out of my enthusiasm for the images sent back to Earth from various missions. Amongst them all, my favourite camera in space is the HiRise on Mars Reconnaissance Orbiter (MRO). The images are available in The Beautiful Mars Project. Also included are mini-stories about Curiosity, InSight, ExoMars and Mars 2020. It was opportune that NASA’s latest Mars mission InSight was launching the next day. The audience loved the fact that the CubeSats accompanying InSight were called WALL – E and EVE after characters in a Disney/ Pixar animated movie.

During my presentation, I try to provide a balance between ESA and NASA missions. It is always important for me to emphasise the collaborations between space agencies and scientists. Being in the now by speaking about current, and proposed space missions adds to the excitement. It would have been brilliant to know at the time, about the latest news regarding a drone helicopter due to cruise the surface of the planet on the Mars2020 mission. Bob Trembley wrote about that here recently if you missed it.

In order to engage my audience further, I brought along a model of Mars which I made some years ago. Having Mars in the room helps when talking about the planets unique features. My model used to be a football in a men’s fashion shop window. A little persuasion helped me acquire it after the sale ended.

It took a lot of work to make it into Mars. Polystyrene is easy to carve but getting all the features in the right place on a sphere is not easy. At first, I was using a large format book by Giles Sparrow ( Mars at New View of the Red Planet). Wonderful images of the planet, but difficult to transfer flat maps to a 3-dimensional object. So then I discovered Mars Globe for iPhone and viola the aspects of the planets could be viewed in my hand from all angles. Roll it around, view it from the poles to see their shapes. I used it look at a feature, make the feature, move along the curve of the sphere, make it and so on.

This app was very useful in pinpointing the landing areas of previous missions and where features were to each other. Having Mars in my hand was just wonderful.InSight is now added to the model, ExoMars and Mars2020 will follow.

Here is the latest update on Mars 2020

Some of the drawings produced that evening were most impressive. Impact craters were very popular as usual. Several children drew ESA’s Trace Gas Obiter. The latest image of Korolev Crater was avoided by everyone due to its complexity. Martian Dust Devils were attempted by children, mams and dads. 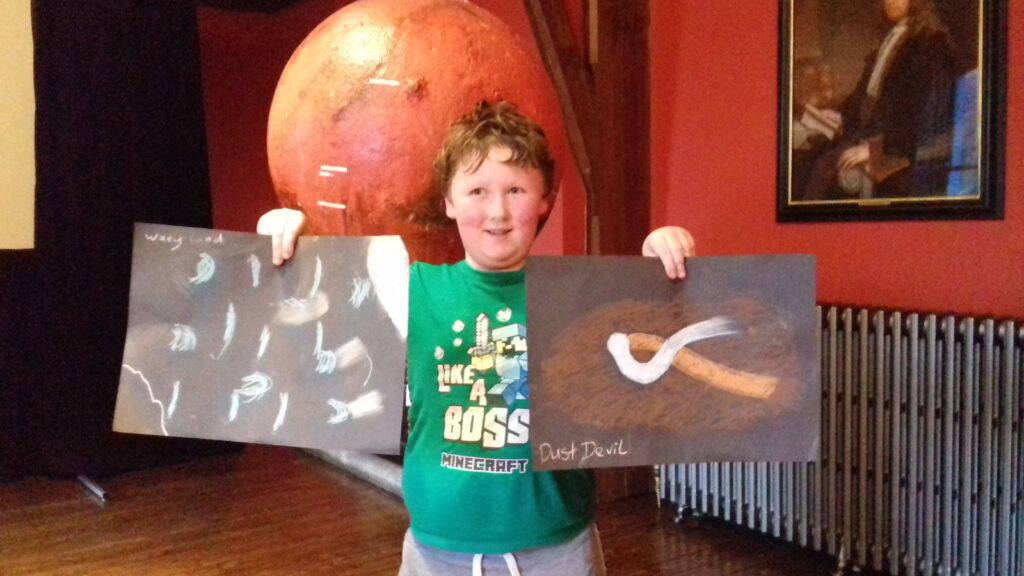 Yes, this boy did an impactful drawing of a Martian Dust Devil. He also holds a drawing of sand moving across the surface of the planet.

The Universe is my Playground stickers (from ESO)  were given to everyone.  I was pleased to be able to give ESA / ROSCOSMOS Trace Gas Orbiter (Part of ExoMars) posters to the participants who made an effort to draw this relatively recent arrival at the red planet.