The most surprising things can be found in astronomy’s history—like “the multiverse,” that collection of parallel universes that is the central theme in Brian Greene’s 2011 book The Hidden Reality: Parallel Universes and the Deep Laws of the Cosmos. You might not expect to encounter a multiverse in an astronomy book from four hundred years ago, but in fact you will if you look through a 1614 book entitled Disquisitiones Mathematicae de Controversiis et Novitatibus Astronomicis (or Mathematical Disquisitions Concerning Astronomical Controversies and Novelties) written by Johann Georg Locher of Germany. The greatest claim to fame of Disquisitions is probably that Galileo made much sport of it in his 1632 Dialogue Concerning the Two Chief World Systems: Ptolemaic and Copernican. Locher was a student of Christoph Scheiner. Scheiner was an astronomer at the University of Ingolstadt, a Jesuit priest, and someone Galileo would eventually come into conflict with regarding sunspots. Disquisitions is only available in original form, in Latin. The noted historian of science Alexandre Koyré once wrote that “Since Galileo’s time no one … has ever so much as looked at the Disquisitions,” and that even people who have cited it obviously borrowed from Galileo’s quotations of it in the Dialogue. This is all unfortunate, because Disquisitions contains much material worth reading, such as Locher’s discussion of the multiverse.

The discussion is very brief. He outlines the basic Aristotelian structure of the universe—earthly material at the center of the universe, with water on the earth and air above them both, and also fire. All this is contained within the embrace of the heavens, which are made of ether and comprise the bulk of the universe. Every material thing is found within this structure, he says. But then Locher notes that various people have opposed this idea—

By “this World” Locher means this observable universe—our Earth and the heavens. He includes a fascinating, full-page illustration of this. In the illustration, the stars surround the system of Earth and planets. Locher says that because the exact arrangement of this system is in dispute (Disquisitions discusses both the Copernican system in which the Earth and planets circle the sun, and the Tychonic system—which Locher favors for scientific reasons—in which the sun, moon, and stars circle Earth while the planets circle the sun), he is leaving blank the space they would occupy. Then, surrounding the stars is the “infinite atomic chaos.” Locher’s idea of an atom is not the same as ours. He is envisioning the most elementary particles of matter, so this might be better rendered the “infinite particle chaos.” 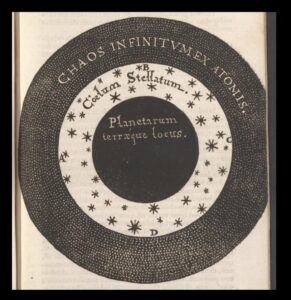 Locher is clearly talking about the sort of ideas found in the ancient poem On the Nature of Things by Lucretius. Lucretius writes—

Lucretius goes on to say that these many universes not only form up from time to time spontaneously from the chaos, but that they also die off into the chaos (and indeed, the general deterioration of things these days—says Lucretius, two thousand years ago—indicates that our universe is already dissolving away).

The multiverse, according to Locher and Lucretius. (Image composed from edited versions of Locher’s diagram.)

Locher says, however, that truth and Christian philosophy demolished this fiction some time ago. He then proceeds to show how this is done. His method? Mathematical reasoning (despite his mention of “Christian philosophy” Locher makes no use of religion in his anti-multiverse arguments). He might not convince a modern mathematician who has the benefit of four more centuries of mathematical studies to look upon, but Locher believes that mathematical reasoning shows that physical infinitudes are unreasonable. He says he will provide just a brief discussion, and not a rigorous argument.

Locher’s discussion has multiple parts, and is not that brief, but it goes something like this: Imagine a line of alternating black and white segments of a given actual length, such as six inches, and that this line starts at A and extends infinitely to the right, in the direction of F. Then suppose the black segments are eliminated, and the whites collapsed to the left toward A. Is there now an infinite amount of space remaining to the right of the whites? That can’t be. You cannot start from A and reach the end of the infinite series of white segments. What if the whites were collapsed to the right? Would there be an infinite space in front of A in which to place the infinitude of black segments? Again, no. 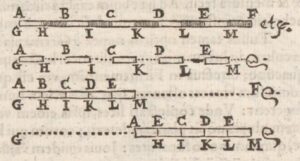 Locher’s illustration of an infinite line extending to the right from A, broken into black and white segments.

Or suppose you were to pair off the blacks and whites, or group them into threesomes or foursomes. If the line consisted of a dozen six-inch segments, then there would be six pairs, four threesomes, or three foursomes. But if the line consists of infinitely many segments then it cannot divide into a finite number of pairs or threesomes or foursomes; it must divide into an infinite number of each. But it cannot divide into equal numbers of each, because there are by definition fewer foursomes than threesomes, etc. Does this mean one infinity is larger than another? Does all this not say that you can subtract an infinity from an infinity and get an infinity? In terms of actual things, like six-inch segments, how do you subtract infinitely many of something from anything and still have anything left over, let alone an infinity? Is this not contrary to the concept of “infinitely many,” and thus unreasonable?

Locher grants the idea of infinity, just not an actual physical infinitude. After all, he says, were there not mathematical infinities then the square roots of all numbers could be determined exactly. He says also to consider a quantity such as motion. Imagine motion being as slow as you want. Divide that in half, and you have slower. There is no limit to this—you can always divide and get a slower motion. So thus certain infinities do exist.

But Locher rejects any physical infinities, and he draws some interesting corollaries from this. Because of this, he says, the universe cannot have existed from eternity; and therefore it was brought into existence at some point in time; and therefore we know from evidence that almighty God, the author of the universe, exists; and the fables of the ancients, about the universe forming from the confluence of elementary particles, are destroyed. There is no infinite multiverse. However, he says the universe we do have is so vast that only God can truly measure and know it.

Nevertheless, Locher continues, despite human feebleness before such immensity, we do now have the telescope, and it has revealed so much we did not know before. And that is what the Disquisitions is mostly about, not the multiverse. But in 1614 the multiverse was being discussed.

*From Book II, 1059-1078. This is my translation, which is based on the translation by John Selby Watson. Here is a more poetic version, by John Mason Good:

And first, th’ entire of things, above, below,
Search where thou wilt on every side alike
Spreads unconfined: this, as already taught,
Right reason proves, and many a clamorous fact.
Then deem not thou, since thus perpetual space
Flows infinite, and infinite the seeds
That, from exhaustless founts, in endless modes
Fly through the void, by endless motions urged,
Deem not this visual system of the heavens
Alone exists, unparalleled by aught,
And that all matter elsewhere sleeps supine.
Since too of its own nature the vast mass
Sprang forth spontaneous, rousing every power
To every mode of motion, rashly oft,
Oft vain and fruitless, till, at length, it formed
Th’ unchanging rudiments of things sublime,
And heaven, and earth, and main, and mortals rose:—
Hence doubly flows it, other systems still,
Like ours, must deck the vast ethereal void,
Enfolded in its avaricious grasp.