My post from last week was about a cool entry on the Vatican Observatory—Faith and Science site about Enrico Fermi (click here for that post).  I had come across Fermi again as I was doing a periodic review of all 500 entries in the site (which I edit), looking for errors and broken links.

In that same review, I came across some other cool entries regarding Max Planck.  Planck was one of the key figures in the development of quantum mechanics.  I was thinking about doing a post on these Planck entries when Fr. Kurzynski’s “Dispelling the Myth” post appeared (click here for it).  Upon reading about yet another instance of the promotion in schools of the idea that there is conflict between religion and science, and about Fr. Kurzynski’s effort to present “an image of peace between faith and science”, I decided that a focus on Planck is in order.

Again, in my opinion the best material to address this issue comes from scientists who are men and women of faith, bearing witness to that faith.  That is especially true when the scientist is of Planck’s caliber.  And, as with Fermi last week, my point here is not to put Planck up on a pedestal as a model of faith, or a saint of some sort.  But it is worth knowing that a Nobel-Prize-winning key figure in the history of science writes things like this: 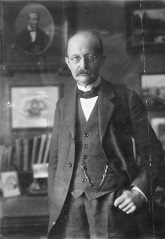 To the religious person, God is directly and immediately given. He and His omnipotent Will are the fountainhead of all life and all happenings, both in the mundane world and in the world of the spirit. Even though He cannot be grasped by reason, the religious symbols give a direct view of Him, and He plants His holy message in the souls of those who faithfully entrust themselves to Him. In contrast to this, the natural scientist recognizes as immediately given nothing but the content of his sense experiences and of the measurements based on them. He starts out from this point, on a road of inductive research, to approach as best he can the supreme and eternally unattainable goal of his quest—God and His world order. Therefore, while both religion and natural science require a belief in God for their activities, to the former He is the starting point, to the latter the goal of every thought process. To the former He is the foundation, to the latter the crown of the edifice of every generalized world view….

So check out the following from Vatican Observatory—Faith and Science: