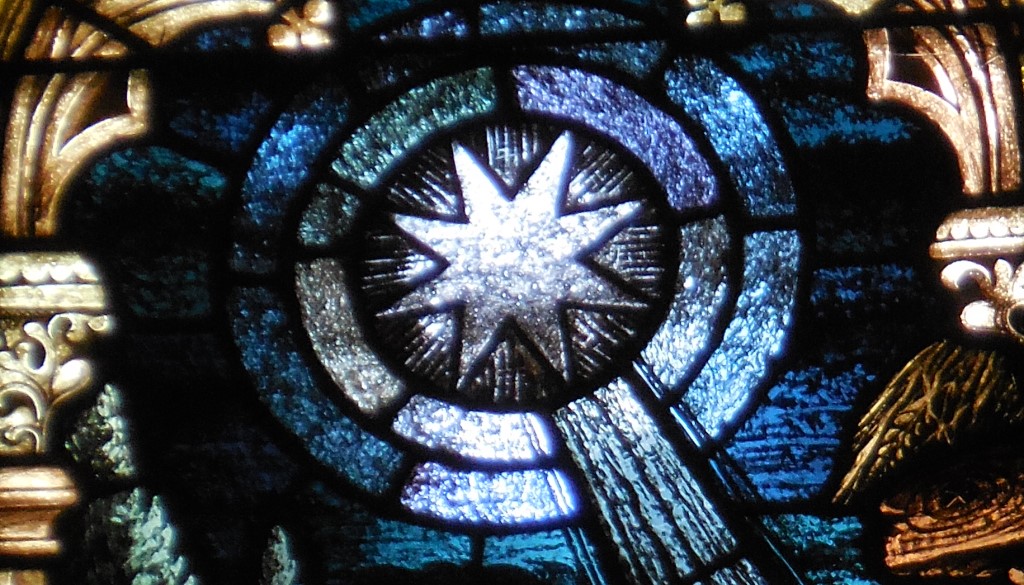 It’s that time of year, when people often ask “religion and science” questions concerning the Star of Bethlehem; you know, “what might be a scientific explanation for the Star?”, and so forth.  Well, what about completely rejecting scientific explanations?  That’s what St. Maximus the Confessor (580-662) did, in his “Life of the Virgin” (available in translation from Yale University Press), the earliest complete Marian biography:

Then suddenly, behold, the Magi came from the east guided by a star to show that the one born was Lord of heaven and earth. And this star was not one of the stars of the firmament, but it was a power sent from above that completely abolished the deception of astronomy and annihilated the darkness of such ignorance [more on this remark below], for its path was not like that of the other stars, but it went slowly according to the pace of those whom it was leading. And sometimes it moved, and sometimes it stood still; and sometimes it appeared to them, and sometimes it was hidden. And its path was from north to south, for so is the route from Persia to Judea. And it did not appear in the heights, but it went close to the earth up to a small village, and it appeared at a small cave. And, what is greatest of all, it shone not only at night but even in the day to the extent that it covered the light and disc of the sun, not for a day or two, but until the Magi came from Persia to Jerusalem and Bethlehem. Nevertheless, it appeared to them not at the birth of Christ but much earlier, so that by it those who were predicting the times of the Nativity were silenced. That is why it appeared a long time before. And it made their hearts faithful concerning the birth of the king and led them to follow a long route. And so it determined when they travelled and when they made camp so that they would find the King of Glory lying in a manger. All this is neither the nature nor character of a star, but it is clear that it was a rational power that understood every detail and was guiding them deliberately by the power and command of the creator and caretaker of all things.

And it was not in vain that it led them to Jerusalem, and when they came to Jerusalem, it disappeared. And this event was ordained for two reasons. Firstly, so that the mystery would be revealed to all the inhabitants of Jerusalem, and it would be made known by the quest and the question of the Magi when they said “Where is he who has been born king of the Jews? For we have seen his star in the east and have come to venerate him.” That is also why the entire city was disturbed, and Herod was terrified at these words. Secondly, so that the enemies themselves, the scribes and the Pharisees, would bear witness and reveal the place and time of the Lord’s birth, and so that they would introduce the prophecy that says “And you, O Bethlehem, land of Judah, you are not at all the least among the rulers of Judah, for from you will come forth a ruler who will shepherd my people Israel”. For the other rulers were… not shepherds, because they would not lay down their lives for the flock. But this one is the true shepherd, because… he leads the flock that follows him to the pasture of Paradise, and he lays down his life for his sheep. See, then, how they bring together the words of the patriarch Jacob and the prophet Micah, for this one said that the Lord would come from Bethlehem, but that one foretold that in the weakening and decline of the rulers of Judah the hope of the nations would appear. When the Magi heard these words, they confirmed them further by the appearance of the star, and they proclaimed Christ the true King.

That is why Herod was frightened, because he craved power, and he was frightened that this might occasion the downfall of his reign and dominion, for he was full of stupidity…. Herod, filled with wickedness, summoned the Magi secretly and questioned them about the child king, and he lied deceitfully and promised his veneration when they should find him and tell him where this King of Kings is. So then the birth of the Lord was made known to the one by the other: to Jews by the Magi and the appearance of the star, to Herod by both the Jews and the Magi, and the Magi were further persuaded when they heard the proclamation of the prophet, and when they saw Herod’s jealousy and fear. But when they went forth from Jerusalem, suddenly their guiding star appeared again, nearby and brighter than the day. It shone even more in the gleam of the sun, the moon, the stars, and all creation. And it led them to Bethlehem as to heaven, to the small cave and the unsuitable tabernacle.

Nevertheless, when they arrived at this place, the star showed them what they desired with an intense brilliance like a finger, and when it had completed its service, it disappeared from them. Nevertheless, when they saw their guiding star, or rather, the angel appearing in this form, they were filled with great joy, because they had obtained what they were searching for.

Maximus seems not to have much good to say about the science of astronomy in general.  “Abolished the deception of astronomy and annihilated the darkness of such ignorance”?  Ouch!  I suspect that the translation is not good here.  I can’t be sure, because while “Life of the Virgin” was written in Greek (Maximus was from Constantinople), only a version in Old Georgian survives, according to Yale.

Still, I suspect that here Maximus is referring to what we today call astrology, rather than astronomy.  After all, he also says that the Star’s “path was not like that of the other stars”, and it behaved according to “neither the nature nor character of a star”.  To say those things requires giving credence to astronomy, that science which would tell him what is the typical path of a star through the sky, and what is its nature or character.  Were astronomy truly dark ignorance, then Maximus would have to deny that stars could have knowable paths or natures or characters.

Maximus also describes the star doing a lot of things that are not discussed in Matthew’s gospel.  Does Matthew mention Persia?  Does Matthew say the star outshone the sun?  If you saw the Faith & Science post earlier this month about the article by Fr. David J. Collins, S.J. on St. Albert the Great and the Star of Bethlehem, and read the article, you learned that there was a lot of lore tacked on to Matthew’s story that added all sorts of details like these—lots of details that have nothing to do with science, and what might be a scientific explanation for the Star of Bethlehem.  For many people throughout history, it really just was not about science in any way.

Thanks to my son for introducing me to Maximus and “Life of the Virgin”.