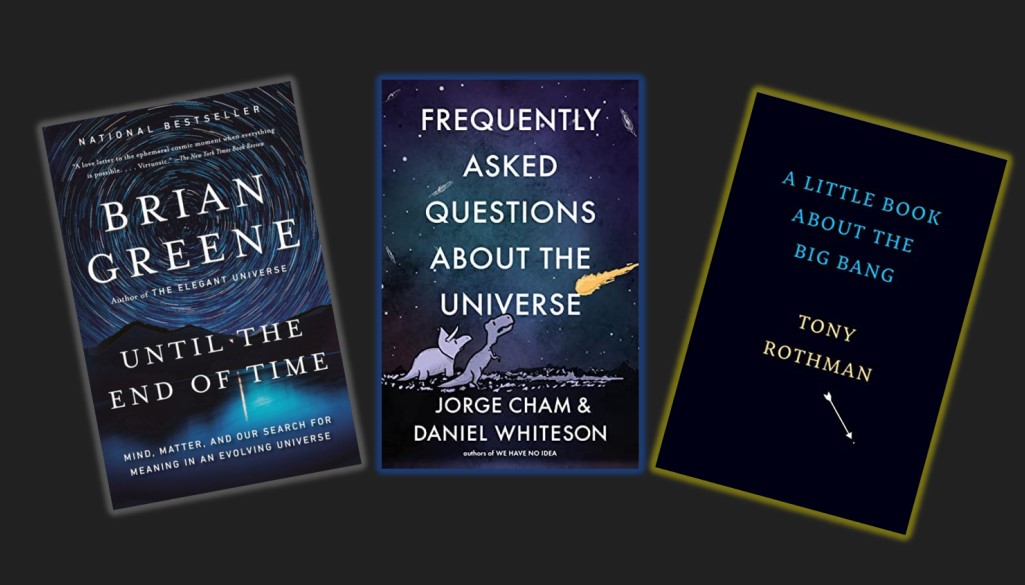 Looking through the astronomy materials at a branch of the local library, three new books from the last three years stood out:

All three of these books feature “The Multiverse”.  Our universe happens to have certain choice characteristics that allow us human beings to be here.  It is easy to imagine all sorts of universes which would be inhospitable to humanity.  So, we seem to have gotten very, very lucky with our universe.  The Multiverse supposedly explains how we got so lucky, by postulating the existence of an infinitude of universes.

Rothman has a very skeptical attitude toward The Multiverse.  He relates how in 2020 someone asked the eminent cosmologist James Peebles if he believed in The Multiverse.  The answer:  No.  Period.  Neither does Rothman (page 195).  It is “the epitome of ‘post-empirical’ science [pg. 197]” in that there is “no way to test the multiverse concept” scientifically.

Yet “the press and the public are fascinated” by The Multiverse, and the idea “has been in the spotlight for well over a decade [195-196]”.  And, Rothman notes, ideas like The Multiverse do excite people and prompt them to study cosmology.  But he concludes his book by arguing (204-206) that some things are just beyond the reach of science.  He gives love as an example.

Green runs with it, too.  He imagines universes “where alternate realities play out”—all possible realities, in fact, playing out infinitely many times each.  Therefore, somewhere, the assassins who targeted Kennedy and King failed, and the one who targeted Hitler did not (307).  Of course the press and the public are fascinated by this.

People I know are fascinated by the idea of a multiverse.  I friend of mine, “Fred”, recently commented to me that he finds the idea of alternate realities with other versions of him very appealing.  I do not think that he, or most of the rest of the public, and the press, has really thought this through.

So why then is there this fascination with the idea of a multiverse?  Cham and Whiteson are of the opinion that “a lot of physicists [40]” are attracted to the idea (not just the public and the press), and think that other “yous” are “more likely than not [34]”.  If we are going to invoke post-empirical science to explain, as Cham and Whiteson put it, “why the universe seems to be so choosy [44]”, is not saying “God did it” a more rational option to explain that choosiness than an infinitude of mass-shooter versions of you?

Note—I am not saying that a God of the Gaps is a good idea.  Nor am I saying that science proves the existence of God, or that God must be invoked to explain the habitability of the universe.  What I am saying is that God seems to me to be a far more rational and appealing post-empirical explanation for our lucky universe than The Multiverse and the infinitude of mass murdering, serial-abusing versions of each of us that necessarily go with it.  I don’t think this is too hard to see.  I am perplexed by the wide-eyed, uncritical discussions of The Multiverse that appear in, for example, certain books.

So God bless you and send you a Happy 2023!  May we hear less this year about multiverses, alternate realities, other versions of ourselves, and the rest of that post-empirical non-science.  May the 2023 additions to the astronomy shelf of my library be free of this stuff as well.