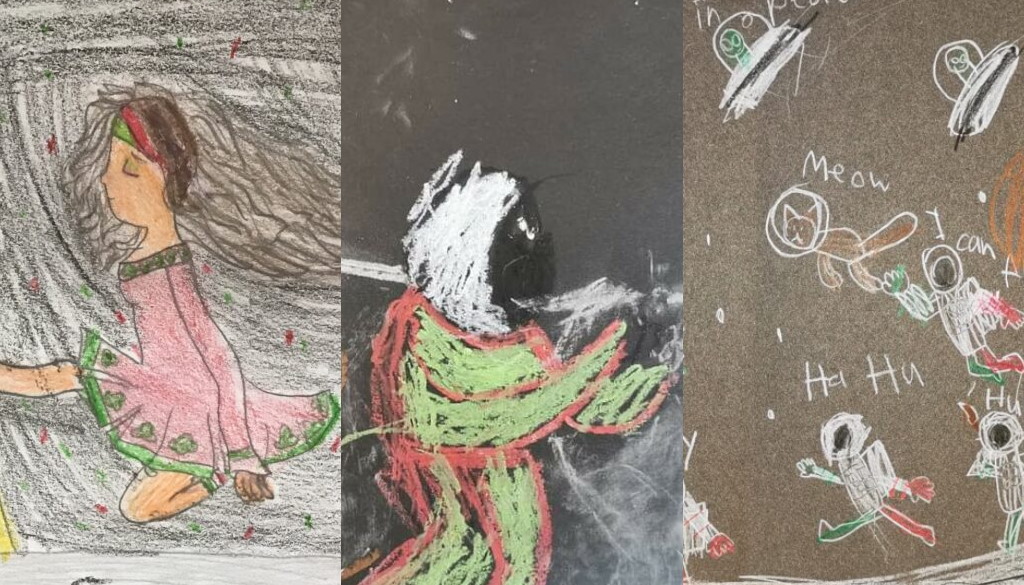 The gathering of the young

June 12th 2021, was the fourth year of Cruinniu na nOg. The idea is to gather the children of Ireland together in a creative bubble of joy. Cruinniu na nOg means the gathering of the young in Irish. My workshops have been part of it since the start. However, last year and this year, most of the events were virtual because of COVID 19. Therefore my task was to make a video presentation to stimulate young creative minds. My aim was to encourage children to be aware of space exploration and see themselves as part of that adventure.

In November 2021, a rocket will launch from Kennedy Space Center. It will orbit the moon, its returning capsule will splash back on Earth. The event will be the dawning of a space exploration project the like of which we have never seen. So far, I find the Artemis Program is not well known. This major leap should be heralded because of the significance of a moon landing. The Apollo 11 moon landing in July 1969 gave me a deep interest in space exploration. Many of my peers would agree that they had a similarly cathartic experience.

Mayo on the Moon

The subject of my presentation for Cruinniu na nOg is Mayo On the Moon. I live in Co Mayo here in Ireland. It was my wish for children to take part and see themselves as part of the Artemis adventure. The idea was to encourage children to produce a drawing while learning about the mission.

Imagine a time when a person from Mayo will walk on the moon. This notion is not as crazy as it seems, as there are plans to land a man and woman on the moon as early as 2024. Artemis also involves putting a space station in orbit around the moon. It will once again light the fire of interest in the future of space exploration.

There is nothing to inhibit the possibility that an astronaut from Mayo will become a reality. Therefore I wanted children in Mayo to be aware of the near future in space exploration. Plant a seed in their heads that maybe they could cultivate their talents and imaginations and engage in this possibility. It is beneficial for young minds to be hopeful, in particular after the previous year.

I draw an astronaut on the moon wearing the new version of a lunar spacesuit within the video. An Irish sport called hurling is depicted as a leisure activity for a busy astronaut during downtime. Children are invited to be innovative and creative while having fun. There are no limits on creativity. The more joy in their creations, the better for everyone.

Using their imaginations, the children watched my video and then put their spin on it. They imagined Mayo astronauts on the moon have a break from their work. Their astronauts were playing Irish football, doing Irish dancing, all kinds of activities, even horse racing. Of course, aliens arrived in the drawings, and even part of Mayo ended up on the moon.

When the drawings started to come in, I was more than happy. Lots of local children took part as well as children from other parts of Mayo. Below are three sample drawings from the many that originated from Mayo on the Moon.