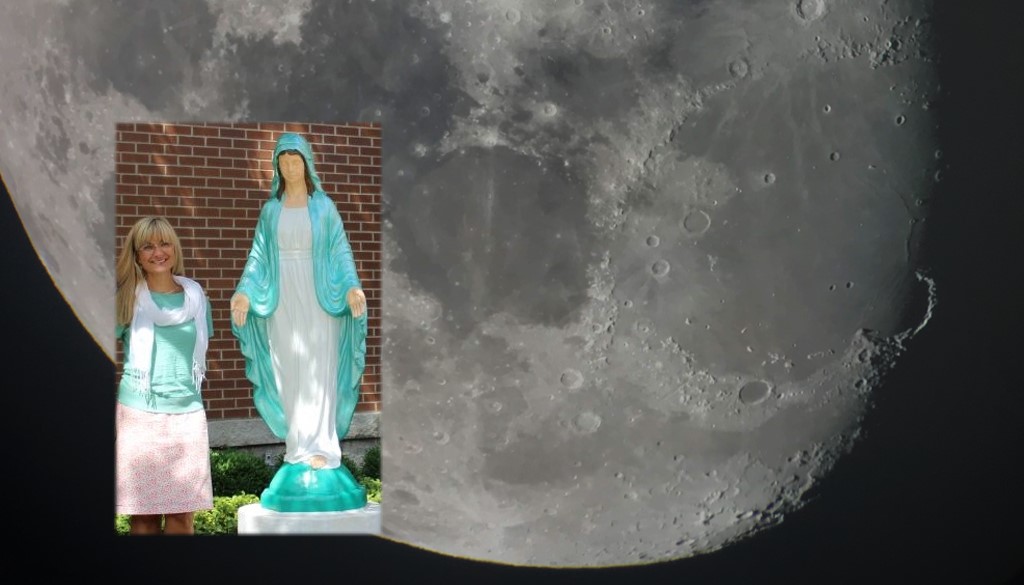 This week we have a guest blogger, Holly McGuire, of Trinity High School in Louisville, Kentucky, who recently attended the Vatican Observatory Foundation ACME program in January.  Holly has an interesting story to tell, of an artist-turned-high-school-theology-teacher ending up at ACME, grilling astronomers about their work on adaptive optics for the Giant Magellan Telescope.  And, since she works in my home town, it was easy for me to bug her for a guest blog!

And so, Holly McGuire of Trinity High School, thank you for sharing the following with us:

What do satellite parts, some Hail Marys, and Tucson, Arizona have to do with my Christian journey? The Catholic Church proclaims the Christian journey begins at the waters of Baptism, is strengthened by the grace of Confirmation, and is renewed by the Eucharist. However, the Church doesn’t state the means to which each Christian explores and shares his or her gifts with the world.

I was raised in Kentucky by my maternal grandparents, Carmalita and Howard Baum. Carmalita was a registered nurse, and Howard was a machinist for the General Electric Corporation. I was often found with my grandpa in his garage where he maintained a machine shop. After he retired, GE subcontracted him to make satellite parts, and I helped him do this. He also supported my artistic talents by sending me to art lessons with a local artist. He would eventually start working with inventors by manufacturing their ideas into a reality. He and my grandma were always opened minded about what I wanted to do, even if it was outside of the box for a middle school girl. I was always on hand in the shop, and I could ask as many questions as I liked.

Due to the precarious nature of a career as an artist, my mother pushed me to explore other areas in college, specifically accounting. I was good at accounting, so I majored in business administration in college, but I later changed my major to fine arts with a minor in business administration. I was happy with the challenge and my grandparents would have been pleased with my decision. Over the following years, I would marry Sean McGuire and have three sons: Lance, Alec, and Luke. I worked as a draft designer for an east coast signage corporation and when time allowed me, I would show my artwork in galleries. This job gave me financial security, but for me lacked any creative challenge.

Upon returning to Kentucky, I would on occasion help Immaculate Conception parish’s Art and Environment committee, going so far as to commit myself to a two-year Morning Star glass mosaic project. The image of the morning star comes from the Exsultet, the Easter proclamation:

May this flame be found still burning
by the Morning Star:
the one Morning Star who never sets,
Christ your Son,
who, coming back from death’s domain,
has shed his peaceful light on humanity,
and lives and reigns for ever and ever.

The mosaic provides the background for the Easter Candle. Together with the baptismal font and ambry, which contains the sacramental oils, they serve as reminders of baptism.

The opportunity to create liturgical art allowed me to pray and work. I followed the Christian example of my grandparents, so I was drawn into the beauty of liturgical life, and I was satisfied for the moment. My pastor and associate pastor wanted me train as an acolyte. From their observation, I was good working with people and organization. In other words, I get things done. I said no the first time, the second time and the third time.

I caved to the pressure, but I was sure I would fall apart in front of the whole congregation. I said many Hail Marys during Mass, which calmed me down and, to my surprise, the pastor was right about my gifts. It was a few years after I became an acolyte that I started teaching at Trinity High School (Louisville, Kentucky) and studying theology. I received my master’s in theological studies from Saint Meinrad Seminary and School of Theology (Indiana) in 2016.

Early in my teaching career, I would stumble over my students’ supposed conflict between science and religion. This issue was emphasized with a colleague of mine that taught science. He would say that he couldn’t be a scientist and a Catholic because faith and reason opposed one another. Eventually I found the Science and Theology Seminar at the University of Norte Dame’s Institute for Church Life. We both attended the seminar and I started to talk about the Big Bang, Galileo, and Evolution.

I continued to make religious art. For example, a large Our Lady of Guadalupe banner and Our Lady of Grace statue for Trinity High School. Nonetheless I was thinking also about science. Since then, I have attended Notre Dame’s follow up seminar as well as various presentations by scientists and become a part of the Archdiocese of Louisville Science and Theology committee. Through all of this, I continued to have more questions than answers and all of it was so frustrating.

I set out to find out more about astronomy, because it was the truth about celestial bodies that moved me to learn more about God through science. A National Geographic episode talked about billions of galaxies and the image in my mind overwhelmed me and stretched my imagination to the brink of the unseen, so I looked up the Vatican Observatory Foundation website. There I found an application to the 2022 Astronomy for Catholics in Ministry and Education (ACME) workshop. The participants were going to do science, so I was all in.

I attended the workshop in January in Tucson Arizona. This workshop gave me the experience of doing science instead of simply talking about it. Over the course of four days, participants enjoyed presentations included the Big Bang, dark matter, dark energy, asteroids, meteorites, Johannes Kepler, and astrophotography. After lunch we traveled to multiple astronomical sites including the Steward Observatory and the Richard F. Caris Mirror Lab, both at the University of Arizona. Researchers showed us how they removed “noise” with code they write. The mirror lab, located under the university’s football stadium, displayed the various stages of manufacturing the last five of seven 8.4-meter mirrors for the Giant Magellan telescope, the largest earth-based telescope in the world.

The next day, we returned to the University of Arizona’s Lunar and Planetary Lab, which developed the NASA Mission: OSIRIS-REx. This ongoing mission obtained a sample of Asteroid Bennu. The sample will give scientists a viable method to understand space debris that falls to earth and how the debris is connected to the origin of the Milky Way. For our last trip of the week, we drove through the desert, pine forest, and snow to the Mount Lemmon Sky Observatory and Mount Bigelow Observatories. We reviewed the history of the observatories, discussed how the astronomers use computer code to review specific areas of the night sky, and met an astronomer, Gregory Leonard, who researches near-earth objects and is the discoverer of the Comet Leonard.

Each evening we celebrated Mass and after dusk we spent at least a few hours looking through telescopes and learned about astrophotography by using our cell phones to take amazing pictures of the night sky. We gathered for the last Mass outside in an unlit chapel under a dark sky with twinkling stars and a couple of towering 250-year-old cacti. The clear night sky displayed a glimpse of the Creator. It was truly a beautiful moment in my Christian journey. I understand that the dialogue between science and theology is essential, but more importantly, it is the ability to “do” science, not just talk about it, that will keep me, and others, intrigued in the journey.

2  |  From the V.O. Faith and Science Pages (Younger Readers): The Girl Who Drew Butterflies

3  |  History and Geology in the Land of St. Theresa