And then I wrote…

There was a joke when I was growing up in Michigan, that the state’s Secretary of State had one job, to choose the color of the license plates; and every year he blew it! Well, one of the jobs I get as director of the Observatory is choosing the picture and text for our Christmas Cards every year. And, yes, people complain!

I thought I would share some cards from Years Past…

The “rules” for the card are simple. It has to have a nice photo from the Observatory itself, and a text in both English and Italian that relates both to astronomy and to the season. Antonio Coretti, our IT guru and designer in Rome, puts the cards together and then sends them off to the Vatican press to be printed. Alas, not this year; finances are tight and so we couldn’t afford to print or mail cards. Instead, we prepared an electronic version.

In fact, we often did prepare electronic versions of our earlier cards as well, and that’s what I am going to share here.

I can’t find a copy of my first card, from 2015, but I suspect (from old emails I did uncover) it involved the plaque that had been installed on the side of our Double Astrograph telescope 80 years earlier, in 1935, which said “Deum Creatorem Venite Adoremus ” : 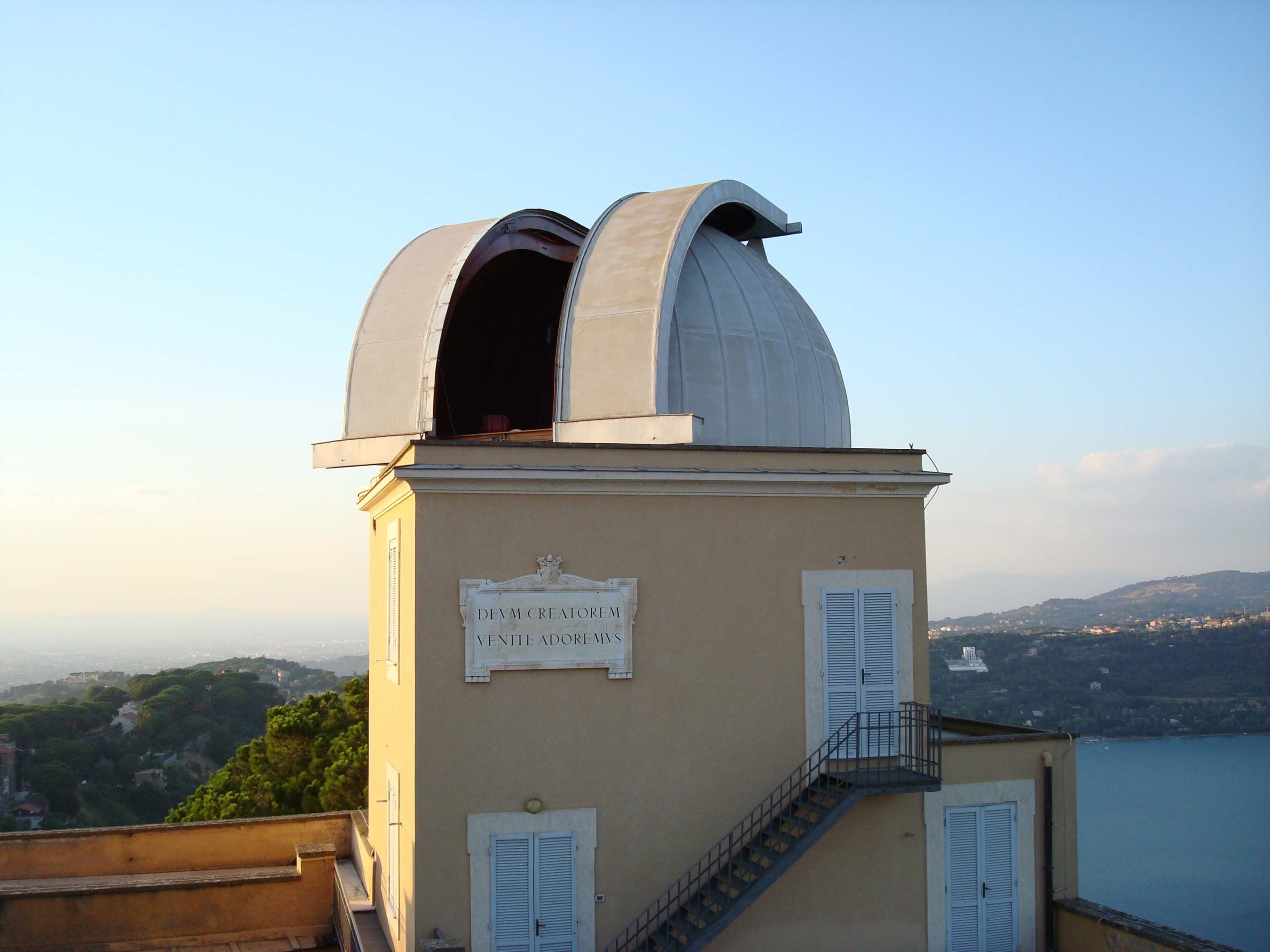 The dome of the Double Astrograph in Castel Gandolfo with the plaque reading “Venite Adoremus Deum Creatorem” — come, let us adore God the Creator

The first complete card I can find is from 2016, and it featured a print from the Vatican Museums that had a timely astronomical theme; we also used it on the cover of our Annual Report, describing the first bolide seen by our camera network in southern Arizona. Here’s a web-friendly version of the 2016 card: 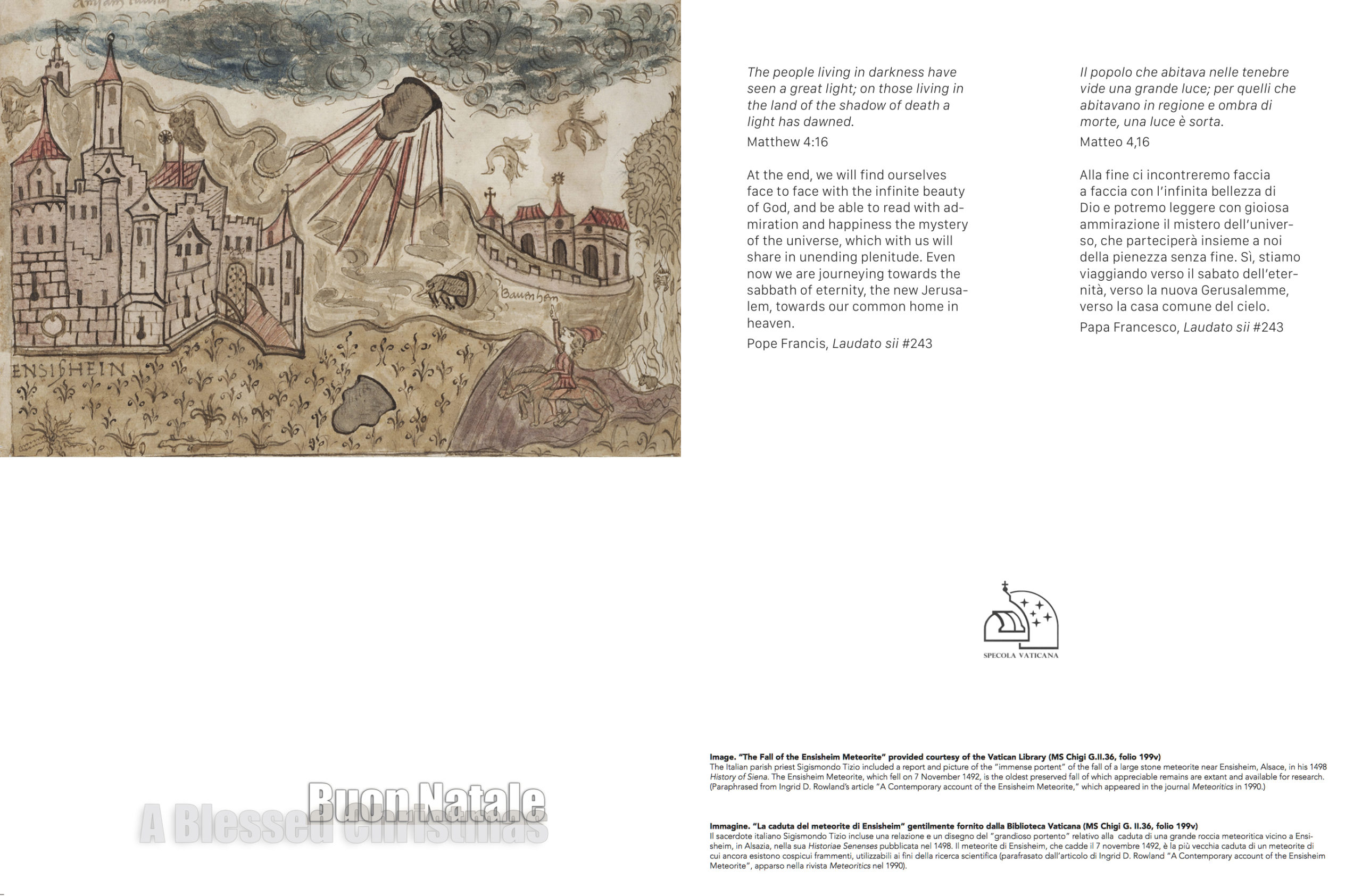 Our card in 2017 featured our newly restored Carte du Ciel telescope, which looked particularly festive in the red observing light… 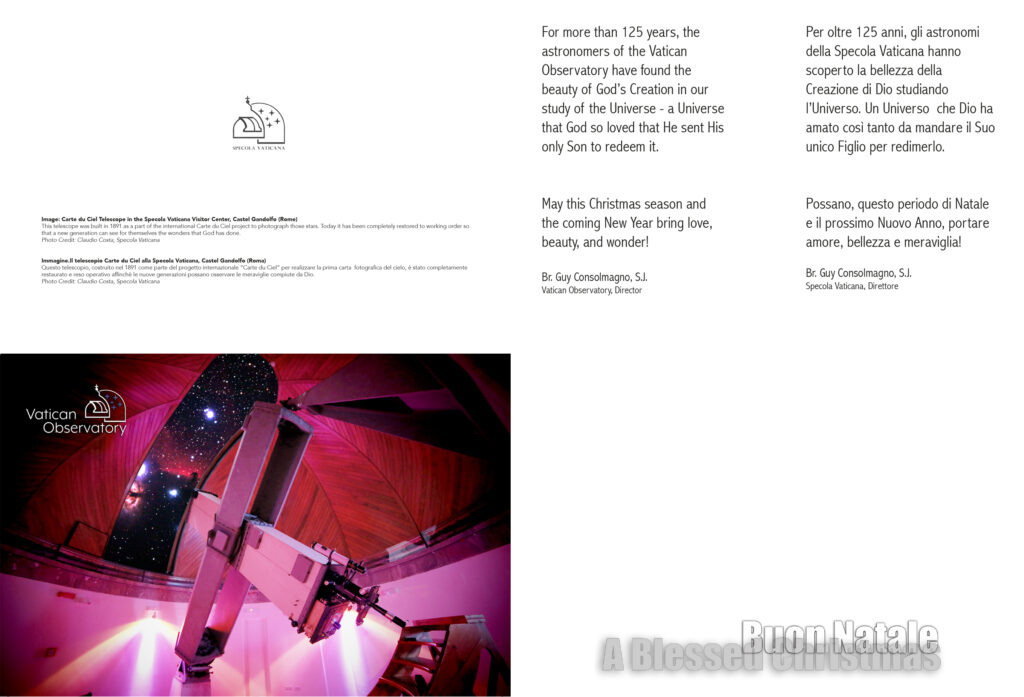 The year 2018 found us going back to the tradition of particularly nice astrophotography. This image was by Claudio Costa, an outstanding astrophotographer who has been working with us at the Specola since he was an astronomy student in the 1970s. He was deeply involved in the Carte du Ciel restoration project — he actually used it in the 1970s — and it was through his good efforts that we got the portable telescope he used for this image: 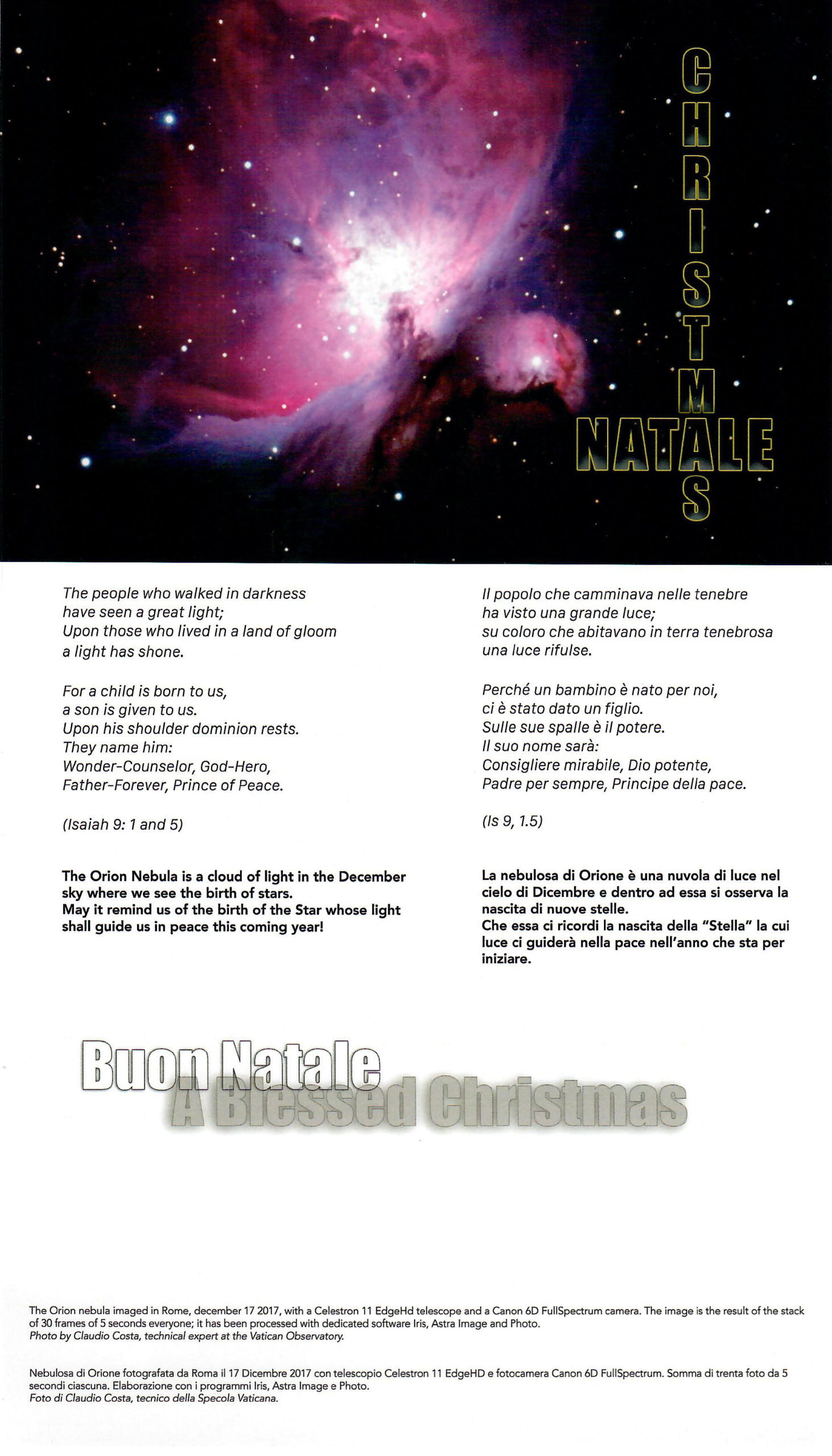 Here’s the card we sent out last year. This time, the image was from our VATT, taken during an observing run I was on with my colleagues Steve Tegler and Bill Romanishin. I am showing the outside of the card, unfolded, since the photo bleeds across both sides but is “upside down” on the back (no such thing as upside down in space, of course). The object is the Bubble Nebula, NGC 7635, a “reflection nebula” which looks like a Christmas ornament to me! 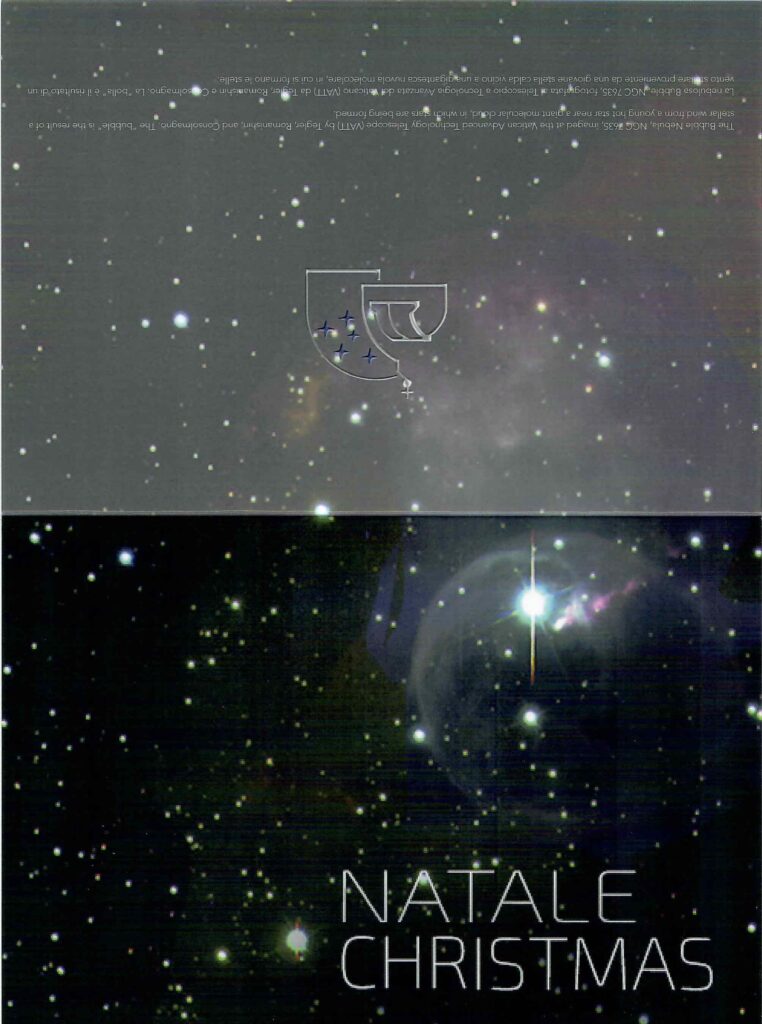 The inside of the card had the text: “Wisdom is a breath of the power of God, and a pure emanation of the glory of the Almighty; therefore nothing defiled gains entrance into her. For she is a reflection of eternal light, a spotless mirror of the working of God, and an image of his goodness.” (Wisdom 7, 25-26) In each child’s breath may we recognize the breath of God and see the One who was a reflection of God’s eternal light.

And finally, this year’s card again features an image from Claudio Costa, which he took near his home in Rome: 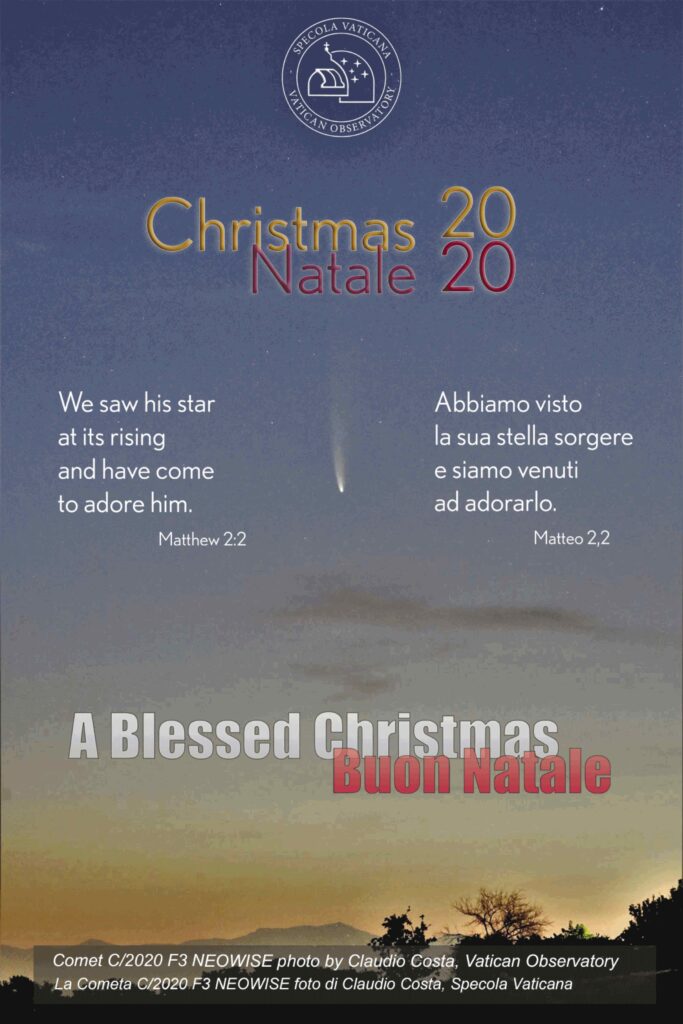 To every one of you, I wish a wonderful Christmas; and may we all have a blessed New Year!