The Vatican newspaper L’Osservatore Romano has published on Easter my article (in Italian) about light pollution, Rome, and the homily of Pope Benedict XVI on Easter of 2012. 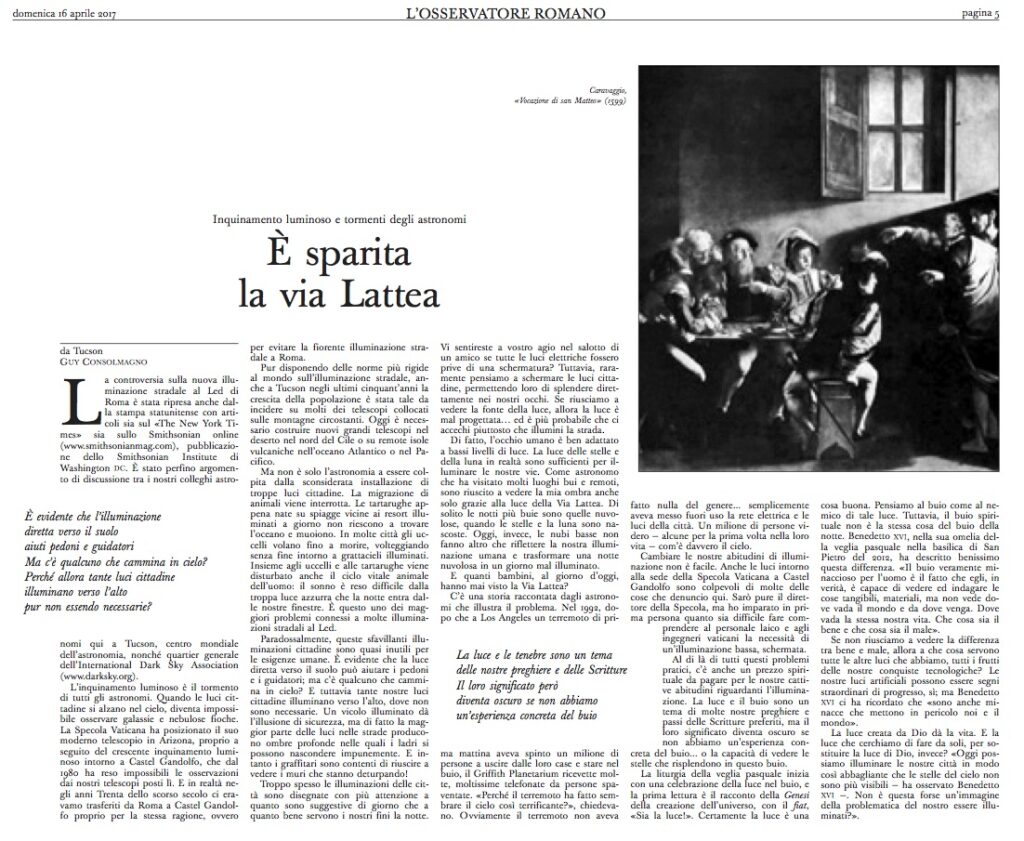 Here’s the English text I sent them:

from Tucson, Arizona:
The controversy over Rome’s new LED streetlights has made it into the American press, with articles in both the New York Times and the Smithsonian Online, the publication of the Smithsonian Institute in Washington DC. It was even a topic of discussion among our fellow astronomers here in Tucson, a world center of astronomy and also the headquarters of the International Dark Sky Association.
Light pollution is the bane of all astronomers. When city lights shine up into the skies, it becomes impossible to observe faint galaxies and nebulae. The Specola Vaticana located its modern telescope in Arizona as a direct result of the increasing light pollution around Castel Gandolfo, which by 1980 had made observations from our telescopes there unworkable. And indeed we had moved from Rome to Castel Gandolfo in the 1930s for exactly the same reason, to avoid the burgeoning street lighting in Rome. Even with some of the strictest regulations on city lighting in the world, Tucson itself has grown so much in population over the last 50 years that many of the telescopes on the mountains surrounding us here have been affected. New big telescopes nowadays must be built in the remote northern desert of Chile or on isolated volcanic islands in the Atlantic or Pacific Oceans.
More than astronomy is affected by the reckless installation of too many city lights. Animal migrations are disrupted. Newly hatched turtles on beaches near brightly lit resorts cannot find the ocean, and die. In many cities, birds fly themselves to death while endlessly circling lit up skyscrapers. Along with birds and turtles, the human animal’s life cycle is also disturbed: sleep is made difficult with too much blue light shining into our windows at night. That’s one of the major problems with many LED streetlights.
One irony is that such bright city lights are mostly useless for human needs. It is understandable that light directed towards the ground can help pedestrians and drivers; but who walks in the sky? Yet so much of our city lights shine upwards, where they are not needed. A lighted alleyway gives the illusion of safety, but in fact most street lights produce dark shadows where thieves can hide with impunity. Meanwhile, graffiti artists like to be able to see the walls they are defacing!
Too often city lights are designed with more care for how quaint they look in the daytime than how well they serve our purposes at night. Would you feel welcome in a friend’s living room if all the electric lights were unshaded? Yet we rarely think to shade our streetlights, allowing them to shine directly into our eyes. If you can see the source of the light, the light is badly designed… and more likely to blind you than to illuminate your path.
In fact, human eyes are well adapted to low light levels. Starlight and moonlight are actually enough to light our ways. As a stargazer who has traveled to many remote dark sites I have been able to see my shadow just from the light of the Milky Way. Traditionally the darkest nights are cloudy nights when the stars and moon are hidden. Today, alas, low clouds just reflect our human lighting and turn a cloudy night into a sickly-illuminated day.
And how many children today have ever seen the Milky Way? 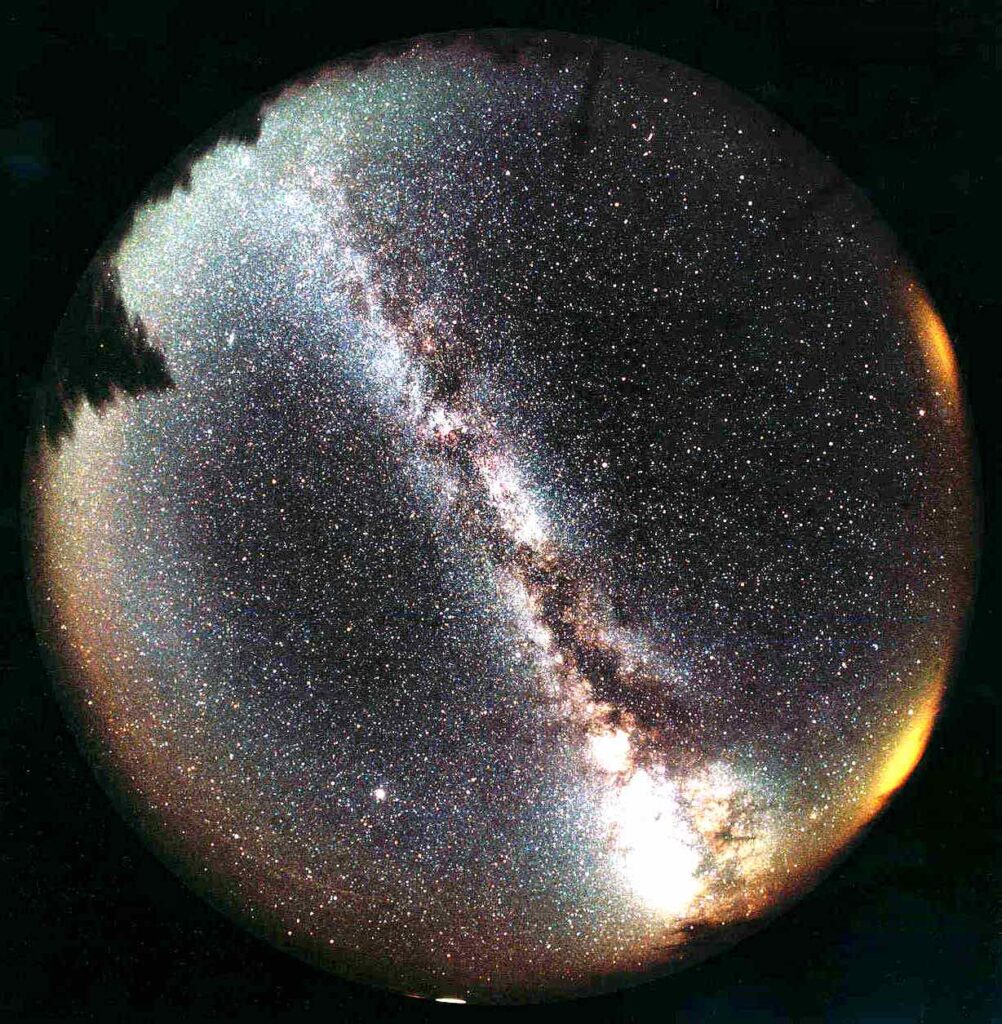 The Milky Way appears as a streak of light across the sky in this image taken from Mt. Graham in the 1980s. Note the dust bands obscuring the central plane of the galaxy. The picture was taken to test the skies where the VATT and Large Binocular Telescopes were eventually built. The yellow glows of light on the right are the city lights of Tucson, 75 miles away, and Phoenix, more than 100 miles away.
A famous story among astronomers illustrates the problem. In 1992, after an early morning earthquake in Los Angeles caused a million people to rush outdoors in the dark, the Griffith Planetarium received many, many phone calls from frightened people. “Why did the earthquake make the sky look so terrifying?” they asked. Of course, the earthquake had done no such thing… it merely shut down the electrical grid and the city lights. A million people finally saw, some for the first time in their lives, what the sky actually looks like.
Changing our habits of lighting is not easy. Even the lights around our Specola Vaticana headquarters in Castel Gandolfo are guilty of many of the things I complain about here. I may be the Director of the Specola, but I have learned first hand how difficult it is to get lay staff and Vatican engineers to appreciate the need for low, shielded lighting.
Even more than all these practical issues, there is also a spiritual price to pay for our bad lighting habits. Light and darkness are a theme of many of our prayers and favorite scripture passages, but their meaning becomes obscure when we do not have an actual experience of darkness… or the ability to see the stars that shine in that darkness.
The Liturgy on Easter Saturday Night begins with a celebration of light in darkness, and our first reading is the Genesis account of the creation of the universe, with the fiat, “Let there be light!”. Surely, light is a good thing. We think of darkness as the enemy of that light.
However, spiritual darkness is not the same as the darkness of night.
Pope-emeritus Benedict, in his Holy Saturday homily at Saint Peter’s Basilica in 2012, described this difference beautifully. “The darkness that poses a real threat to humankind, after all, is the fact that while we can see and investigate tangible material things, we cannot see where the world is going or whence it comes, where our own life is going, what is good and what is evil.”
If we can’t see difference between good and evil, then what good are all our other lights, all the fruits of our technological achievements? Our artificial lights can be wonderful signs of progress, yes; but the Pope reminded us, “they can also be dangers that put us – and the world – at risk.”
Light created by God gives life. But what of the light we try to make for ourselves, to replace God’s light? “Today we can illuminate our cities so brightly that the stars of the sky are no longer visible,” the Pope noted. “Is this not an image of the problems caused by our version of ‘Enlightenment’?”