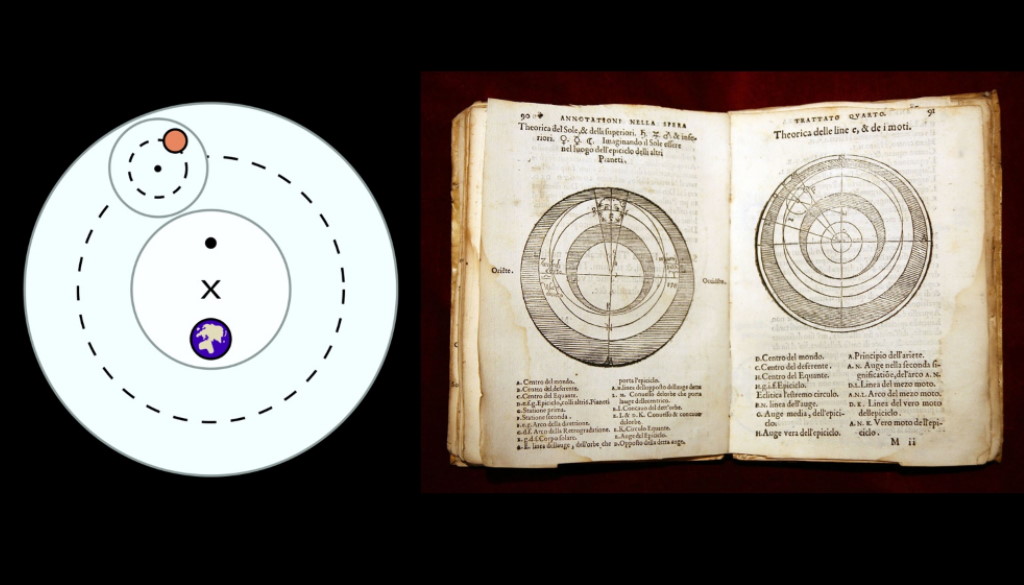 Misinformation.  It is a big topic these days, and a big problem.  And when the topic is astronomy and the Copernican Revolution, misinformation abounds, even in the relatively durable, more controlled medium of books.  “Caveat lector!” applies to this topic—“Let the reader beware!” 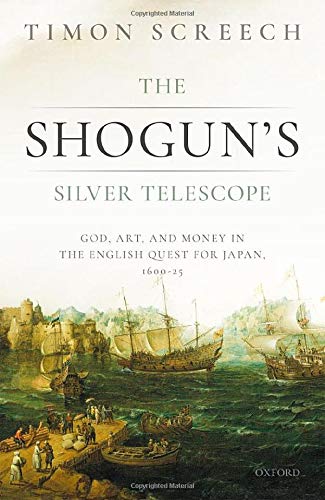 The scholarly book is The Shogun’s Silver Telescope: God, Art, and Money in the English Quest for Japan, 1600-1625, published in 2020 by Oxford University Press (OUP).  The author is Timon Screech, Professor of the History of Art at the School of Oriental and African Studies (SOAS), University of London.  SOAS’s web site says that SOAS is “the leading Higher Education institution in Europe specialising in the study of Asia, Africa and the Near and Middle East.”  Screech has numerous publications to his name.  OUP is a major academic press, usually showing up in the top 5 of rankings of academic presses.  Oxford University is, of course, the Oxford University.  But despite all that scholarly muscle, Silver Telescope builds its title thesis on misinformation.

Silver Telescope tells the story of the English effort to sell their wares in Japan in the early 17th century.  The title refers to a telescope that they took to Japan aboard a ship called the Clove, which left England for Japan in 1611.  The telescope was a gift for the ruler of Japan, the Shogun.  Screech maintains that the purpose of the telescope was to discredit the members of the Society of Jesus who had already been in Japan for some time, preaching, growing the Church (Screech describes Nagasaki in that time as “a self-governing Roman Catholic city [p. 9]”), and (in the eyes of the English) nefariously oiling their destructive, regicidal way into Japanese society.

The telescope would discredit the Jesuits, according to Screech, by showing that the geocentric astronomy that they taught was wrong.  “The Japanese were thirsty for scientific knowledge,” he writes, “and the Jesuits taught as much astronomy as theology [p. 74]”.  And so:

Here is the crux: telescopes allowed any careful observer to see that Copernicus was correct.  The instrument made it possible to detect with one’s own eyes—never mind abstruse calculations in Latin—that the earth does revolve around the sun.  To maintain the opposite view, after 1608, was to persist in wilful error [p. 73].

“A telescope could be used to turn the tables,” against the Jesuits, says Screech, as “a telescope would confuse and embarrass their whole mission [p. 74].”  The “terrible findings” of telescopes in general, he says, “were shaking the papacy [p. 236].”

But of course the telescope did not make it possible to detect that the Earth revolves around the sun.  To maintain otherwise was not to persist in willful error.  All the new telescopic discoveries were fully compatible with Tycho Brahe’s new “hybrid” geocentric system (which Screech mentions in passing, p. 73).  In 1611 telescopic discoveries were being verified by Jesuit astronomers at the Roman College, and Galileo was being honored by them for his work.  Astronomy was being shaken—the new discoveries were bringing hybrid geocentric systems to the fore, but in 1611 this was not a concern of the papacy.

What is more, the chances that anyone who had not put in a lot of time at the eyepiece could pick up a 1611 telescope and use the thing to detect anything at all in the heavens were slim.  Telescopes in 1611 were not user-friendly.  A newcomer to the eyepiece would not have been able to do any astronomy with the Shogun’s silver telescope, not without some astronomer (likely a Jesuit) to teach that person how to use it!

There is a tangential reference to this in the book.  Two Japanese gentlemen hear about the silver telescope and inquire about getting a telescope of their own.  An English merchant had one, Screech writes, and—

This he was willing to give, though having experimented with it, the gentlemen graciously handed it back.  There is no further record, but the two Japanese lords must have gone away with many new ideas [p. 180].

Anyone who has messed with a replica of a telescope from that era can tell you that there was probably just one idea that the two lords went away with, the same idea that was the reason they handed it back—namely, “it’s impossible to see anything through that tube!”

The title thesis of Silver Telescope, that the English took a silver telescope to Japan as a gift to the shogun so that the “astronomical notions conveyed with the telescope [p. 182]” would undermine the Jesuits (and in fact did so, contributing their expulsion from Japan shortly after the English arrived), is based on a complete misunderstanding of what a telescope could reveal, and of what a person using a 1611 telescope could see.  Or rather, it is based on a complete absence of any effort to understand, for a little time with Wikipedia would have been sufficient to discover this. 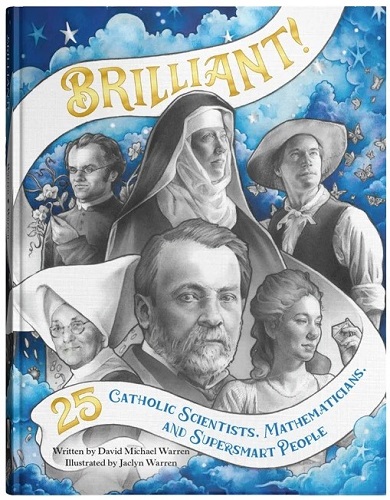 Some time with Wikipedia would have also helped the book for younger readers: Brilliant! 25 Catholic Scientists, Mathematicians, and Supersmart People, also published in 2020.  Pauline Books & Media and the Word on Fire Institute were the publishers.  The book was written by David Michael Warren, illustrated by Jaclyn Warren, and features a Foreword by Chris Baglow, director of the Science and Religion Initiative of the McGrath Institute for Church Life at the University of Notre Dame.  Bishop Robert Barron of Word on Fire made a video to recommend Brilliant!.  But all that Church muscle failed to keep out serious misinformation.

Five of the 25 people featured in Brilliant! relate to astronomy: Nicolaus Copernicus, Fr. Christopher Clavius (of the Society of Jesus), Fr. Angelo Secchi (also S.J.), Fr. Georges Lemaître, and Karin Öberg.  All but the Öberg section contain errors.  Some of those errors are limited in scope—the Secchi section, for example, mixes the concept of bending light with the dispersing of it into colors.  But it is the section on Copernicus (of course) where Brilliant! matches Silver Telescope for serious misinformation.

After introducing geocentrism, noting how the sun is indeed seen to rise and set as though it were circling Earth, and mentioning Aristotle and Ptolemy, Warren writes,

After a while, Copernicus started to see problems with the geocentric model.  First, it did not make sense with the calendar of his time, the Julian calendar.  The geocentric model called for a calendar year that was about eleven minutes too short.  This might not seem like much time, but it added up over the years.  Second, Copernicus noticed the planets would be brighter and bigger or dimmer and smaller depending on what night it was.  If the planets went around the Earth in perfect circles—as the geocentric model claimed—they would always look the same.

Copernicus wanted to develop a model of the solar system that could make sense of these issues.  He had the new idea that our solar system was heliocentric, not geocentric.  This meant that the sun, not the Earth, was the center of our solar system!  Suddenly, the universe made sense!…

Sadly, many people did not accept Copernicus’ way of seeing the universe.  The people who could not see the truth of his claims called him a fool for his beliefs [p. 12-13].

Of course, calendars are not dependent on whether Earth circles the sun or vice versa.  Indeed, the Gregorian calendar that we use now (and that Warren discusses in the section on Clavius) was instituted in 1582, under geocentric astronomy.  The varying appearance of the planets had been noted long before Copernicus; Ptolemy had accounted for these variations by having the planets move around Earth on epicycles, not in simple perfect circles as Warren says.  Thus, Copernicus was not seeking to make sense of the issues Brilliant! describes.  The universe did not suddenly make sense under heliocentrism.  Moreover, since the existing physics of the time was that of Aristotle, which worked well for a geocentric universe but not for a heliocentric universe, a lot of things made less sense.

Notice how both Brilliant! and Silver Telescope share the same notion—that somehow heliocentrism could be seen to be true, and that people who did not see this and opposed heliocentrism were sadly persisting in willful error (people like Jesuit astronomers).  Historians of science know that heliocentrism could not be seen to be true in the early 17th century, and that strong evidence for heliocentrism would not arrive until the development of Newtonian physics and the discovery of stellar aberration more than a century after Copernicus.  The strength of scientific arguments in favor of a geocentric universe has been one of my main subjects of research.  It has been the topic of various posts of mine here on Sacred Space Astronomy—but it has also been featured in articles in Scientific American (click here for it) and Logos (click here), to mention a couple, and in a certain book (click here).

Warren’s Introduction to Brilliant! opens by asking “Have you heard these lies?” and listing common false beliefs about Christianity and science; it closes with “Ask the biggest questions you can so that you may find and know the Truth!”  Baglow’s Foreword says, “This book tells the truth.”  Yet Brilliant!, like Silver Telescope, contain so much that is not true.

The reason these books can contain so much misinformation is, in my opinion, that in our broader culture science is simply not understood, and thus in the end not questioned.  Today, we believe that science leads to the truth; we know that science has shown that the Earth orbits the sun; we know that Copernicus proposed this.  Hence, we assume that science must have always revealed the truth of Copernicus’s ideas: of course the telescope would reveal Earth’s motion to anyone who looked; of course heliocentrism would cause the universe to suddenly make sense.  This attitude regarding science is so deeply embedded in how we think that even all the intellectual muscle of OUP or Word on Fire was not sufficient to prevent the publication of basic errors that would have been uncovered by the least effort to understand the science in the Copernican Revolution.

Please get serious about understanding science and understanding the Copernican Revolution, O Reputable Publishers of Books!  Until you do, the misinformation problem will just grow worse.  How can we take apart the web of conspiratorial and magical thinking that now has ensnared so many if reputable publishers put out books like Brilliant! and Silver Telescope?  Caveat lector!