Last week I introduced readers to a newly published paper by Michael J. Crowe entitled “William Whewell, the Plurality of Worlds, and the Modern Solar System.” Crowe is the Rev. John Cavanaugh, C.S.C., Professor Emeritus in the Program of Liberal Studies and the Graduate Program in History and Philosophy of Science at the University of Notre Dame, and one of a relatively small number of scholars who study the history of human thought concerning intelligent life on other worlds, and Crowe suggests that Whewell (1794–1866), Master of Trinity College of Cambridge University, was the first person to envision the modern solar system.  As noted last week, from Copernicus up through the early nineteenth century astronomers assumed that intelligent life was abundant outside of Earth—and in particular, abundant within the solar system.  To use the language of the times, they believed in a “Plurality of Worlds” like Earth.

Crowe notes that in 1853 Whewell anonymously published his Of the Plurality of Worlds: An Essay, attacking the idea of a universe widely inhabited with intelligent life.  Crowe writes that a key argument of Whewell’s was applications of the inverse-square-law as it relates to gravitational force, light, and heat radiation.  This is the law that says that if planet B is twice the distance from the sun as planet A, it will receive one quarter the heat and light from the sun, all else equal.  Thus, were the Earth a little closer to the sun, or a little further away, it would be significantly hotter or colder than it is now.  Crowe argues that Whewell was one of the first people to consider the idea of a “habitable zone” around a star—an idea he put forward in the Essay.  Whewell also used geology to argue against widespread extraterrestrial intelligence.  Crowe notes that Whewell had been elected president of England’s Geological Society and that—

Whewell’s argument was that evidence for the age of the Earth showed that throughout most of Earth’s history it had been bereft of intelligent life, which suggested that the Creator’s plan for the cosmos was capacious enough to leave vast regions of it lacking ETIs [intelligent extraterrestrials] for long periods of time.

Whewell did not rule out the idea of lower life forms within the solar system.  For example, he speculated on life existing on Jupiter, writing that Jovian life forms might be “aqueous, gelatinous creatures; too sluggish, almost, to be deemed alive, ﬂoating on their ice-cold water, shrouded forever by their humid skies.”  However, time has not been good to even the idea of lower forms of extraterrestrial life within the solar system; were we to find even a microscopic gelatinous creature on Mars, that would be considered a monumental discovery. 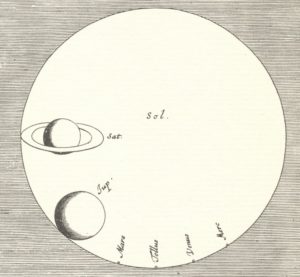 Crowe argues that the evidence for a diversity of worlds—that is, for planets that are not like Earth, as opposed to planets that are like Earth—was present long before Whewell.  For example, Christiaan Huygens, in the same later seventeenth-century book in which he wrote—

A Man that is of Copernicus’s Opinion, that this Earth of ours is a planet, carry’d round and enlighten’d by the Sun, like the rest of them, cannot but sometimes have a fancy, that it’s not improbable that the rest of the Planets have their Dress and Furniture, nay and their Inhabitants too as well as this Earth of ours: Especially if he considers the later Discoveries made since Copernicus’s time of the Attendents of Jupiter and Saturn, and the Champain and hilly Countrys in the Moon, which are an Argument of a relation and kind between our Earth and them….

—includes a fairly accurate diagram of relative sizes of the planets.  Likewise, says Crowe, Isaac Newton included in the third edition of his Principia calculations showing the substantial differences in the mass, density, and surface gravity of different solar system bodies.  Both Huygens’ diagram and Newton’s numbers illustrate planetary diversity, not planetary homogeneity.  They in fact suggest reason to admit that, unlike our Earth, the other planets might be devoid of dress and furniture and inhabitants.

But Huygens and Newton lived a century prior to Whewell.  Why did Whewell come to reject the idea of a plurality of worlds when so many others did not?  Crowe argues that what brought on Whewell’s resistance to the idea was that Whewell, a priest in the Church of England, came to believe that a plurality of worlds posed problems for Christianity.  For, he said, Earth is—

—the Stage of the Great Drama of God’s Mercy and Man’s Salvation; the Sanctuary of the Universe; the Holy Land of Creation; the Royal Abode, for a time at least, of the Eternal King. This being the character which has thus been conferred upon it, how can we assent to the assertions of Astronomers, when they tell us that it is only one among millions of similar habitations…?

Thus Crowe argues that Whewell’s religious convictions prompted him to question the ruling paradigms of the day (the “Copernican Principle” that said there is nothing special about Earth, and the “Principle of Plenitude” that said that God or Nature would not waste the efforts involved in producing the universe without placing within it widespread intelligent life) and to look at the existing data in a new light.  Whewell wrote, “I obtain my views of the physical universe from the acknowledged genuine sources: observation and calculation.”

Whewell was right, and those who argued that the solar system would abound with intelligent life were wrong.  Crowe concludes that Whewell’s work played a key role in our coming to the modern view of the solar system as “a rather desolate place…. wherein there is intelligent life but only on one object, and that object of rather unimpressive size.”