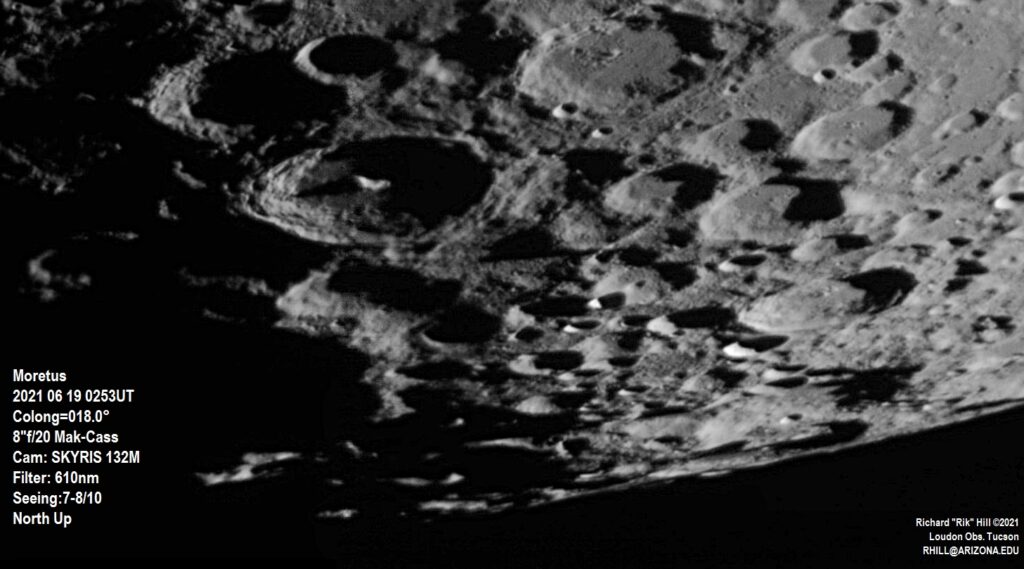 If it were anywhere but in this crowded field the crater Moretus (117km dia.), bigger than Copernicus, would be given much more attention. Here the crater is above and left of center displaying beautifully terraced interior walls, a long shadow from the central peak and interesting ridges tangent to the the north and south walls trailing off and converging to the right. Caught between these ridges to the right is the crater Simpelius (71km). Below this crater is another larger crater Schomberger (88km). Further south is another larger crater Scott (111km) and even further south, closer to the pole, on the limb is Scott’s nemesis Amundsen (109km). To the left of Amundsen, in shadow is where the Lunar Prospector was intentionally crashed on Jul. 31, 1999, in a permanently shadowed area of the crater Shoemaker in hopes of vaporizing water from ice hypothesized to be in the soil there. Telescopes all over the western hemisphere were watching that night including the 61-inch I was working on where we had a large echelle spectrograph set up to catch absorption lines from the water. We watched through the whole event and well afterwards but did not see anything. In fact, no one reported positive results from that impact experiment.

Above Moretus to the right is Curtius (99km) and to the upper left deep in shadow is Gruemberger (97km). There are a number of other smaller named craters in this image. I leave it to the reader to pick them out.