Bill Higgins’s posts on the Cabinet of Physics in Florence have been fascinating, and especially interesting in regards to astronomy was the one about the spectrum of a carbon lamp.  The carbon lamp spectrum is a continuous spectrum, with the Red-Orange-Yellow-Green-Blue-Indigo-Violet ROYGBIV rainbow of colors where one color blends seamlessly into the next.

These colors were described by Isaac Newton in his 1704 Opticks. Or, a Treatise of the Reflexions, Refractions, Inflexions and Colours of Light.  Opticks is a landmark work of science by a great scientist—but it is nonetheless an approachable work, one to which both the layperson and the beginning student of physics can relate and one whose content they are likely to understand.  Within Opticks you will find described (in English, not Latin) and well-illustrated phenomena everyone has encountered.  You will find laid out principles that are studied in introductory physics and physical science classes of every level, and even in art or photography classes: rays of light; reflection; refraction; colors; rainbows; the workings of the human eye.

Newton states on the fourth page of Opticks the principles of reflection and refraction of light: “The Angle of Reflexion is equal to the Angle of Incidence”; “The Sine of Incidence, is either accurately or Very nearly in a given Ratio to the Sine of Refraction.”  This latter ratio he states as being 4 to 3 for light passing between air and water, 17 to 11 for light passing between air and glass.  These ratios are known today as the indices of refraction for water and glass.  A little further on he puts forward the idea that different colors of light are differently refracted when they pass from one substance to another: “Lights which diﬀer in Colour, differ also in Degrees of Refrangibility.”  Newton states his ideas carefully, claiming not that they are absolutely true, but that they describe truly what occurs “either accurately or very nearly” and “either accurately or without any sensible Error.”

Based on these simple ideas, tested through experiments, Newton proceeds to explain how sunlight contains within it different colors—or as he puts it, “The Light of the Sun consists of Rays differently Refrangible.” These colors that comprise sunlight, or indeed white light in general, are the colors of that staple of even elementary school science classes: the familiar ROYGBIV rainbow spectrum produced by a glass prism: “the Lights of several Colours are more and more Refrangible one than another, in this order of their Colours, Red, Orange, Yellow, Green, Blew, Indigo, deep Violet.”  He even provides a detailed explanation of the formation of rainbows by droplets of rain—although he notes that on this subject he is merely adding to work done in the previous century by René Descartes and especially by “Antonius de Dominis Archbishop of Spilato,” who he says taught “how the interior Bow is made in round Drops of Rain by two refractions of the Sun’s Light, and one reflexion between them, and the exterior by two refractions and two sorts of reflexions between them in each Drop of Water, and proves his Explications by Experiments made with a Phial full of Water, and with Globes of Glass ﬁlled with Water, and placed in the Sun to make the Colours of the two Bows appear in them.”

The significance of the spectrum began to be appreciated in the nineteenth century as a means of learning about distant objects.  In 1835 the French philosopher Auguste Comte had written that

Yet at the very time Comte was stating this, astronomers were learning that by studying the spectra given off by celestial bodies, they could indeed learn about the compositions of the stars and planets. 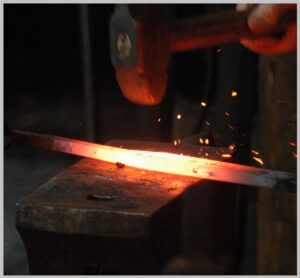 There is more to spectra than just pretty colors.  Continuous spectra, as seen in the case of the carbon lamp, are given off by dense, incandescent bodies, like a piece of heated iron.  The proportion of colors depends on temperature—the hotter the iron, the more it radiates light from the blue and violet end of the spectrum verses the red and orange end.  Thus as a dense body’s temperature rises its color changes from glowing dull red, to glowing orange-yellow, then white, and then even blue-white.  Also, the amount of light increases with temperature—a piece of iron that is glowing red hot glows less brightly than if it is glowing orange-yellow.  Stars, and the sun, have the same sort of continuous spectra as incandescent dense objects, and stars also come in colors of red, orange-yellow, white, and blue-white.  This suggests to us that stars and the sun are incandescent dense objects of differing temperatures.

And then there are the line spectra.  These are produced by more gaseous materials.  There is also a Cabinet of Physics video showing some of these.  The pattern of colors given off by differing substances is a spectral “fingerprint” that can be used to identify those substances.  For example, in the Cabinet of Physics video can be seen the spectra for water vapor and argon.

The lines themselves are affected by motion, the presence of magnetic fields, and more, so all sorts of things can be determined about a distant object through its spectrum.  Through the analysis of spectra, astronomers really can determine the compositions and structures of celestial bodies, even though all we have to work with is light!

Of course the web is full of information on spectra.  What is especially cool about the Cabinet of Physics videos is that they show spectroscopy being done with old technology, technology centered around a simple glass prism.  It gives a nineteenth-century flavor to spectroscopy, which is appropriate since spectroscopy was a nineteenth-century invention.  It is valuable for students and members of the general public to see this, because many have very little idea where our technology comes from, and how we know the things we know.  The Cabinet of Physics makes it easier to connect the dots between the early work of Antonius de Dominis and Isaac Newton, and the modern instruments that astronomers currently use to determine the composition of celestial bodies, and might someday use to tell us something about the nature of the organisms that might live on the surfaces of those bodies.