One of the greatest gifts God has blessed me with is a love for music.  As my first field of study after high school, I still have a deep affection for classical music (and just about every other type of music), from the ancients to the moderns.  A serious study of music history reveals something far more interesting than everyone’s favorite “Music Appreciation” class they slept through in college.  What the student is treated to is a fascinating weave of art, politics, philosophy, religion, and science.  In a real way, music history is the study of expressing the human experience through musical forms with special emphasis placed on God and creation, whether it be something as common as a flower or as extraordinary as the Resurrection.

A copy of two pages from Boethius’ De Institutione Musica from the digital archives of the Bodleian Library. Click here or on the image for the original archive.

I vaguely recall a lecture from one of my Music History classes that explored Boethius’ De Institutione Musica.  The work presents the mathematical proportions we find in the sky above, on earth below, and in the human person, which became the theoretic structure of some of the greatest pieces of music ever written.  This vision of the universe contributed to the idea of music emanating from the “Sacred Spheres” of creation, giving voice to a true “harmony” in the cosmos that also contained moral and ethical dimensions.  This mathematical genius permeated every part of our culture from music, sculpture, architecture, literature, and just about any field of study that could be expressed mathematically.  This idealistic vision of the interconnected nature of the world fueled an initial romanticism in me back in college, feeling that everything I encountered was “singing” a “cosmic hymn” of beauty and unity.  Even today, hints of this idealism still resonate in me when I hear works like Gustav Holst’s “The Planets,” from which many a priest used the chorale section from the “Jupiter” movement as the opening hymn of their first Mass, more commonly known in liturgical music circles as “O God, Beyond All Praising.”

The part of Holst’s work that was transformed into the popular hymn, “O God, Beyond All Praising,” starts at 2:54.

I have reflected on these mathematical proportions in the past (look at my post, “Oh dear Lord… Not Another Rant About Fibonacci Numbers! for more details).  Therefore, I will not re-present ideas I have already shared.  What I want to reflect upon, instead, is to dispel the myth that this process of seeing a “harmony” within creation is something in the past, presuming that our modern understanding of the world makes no room for such a harmonious unity.  I thought of this a week ago while watching the lunar eclipse.  In the ancient world, a moon that turns red, comets in the night sky, and “new stars” that could be anything from planetary conjunctions to supernovas contained a foreboding warning for the people of that time.  With the old metaphysics of seeing planets and stars as spheres of the heavens, if something was going wrong “up there” then it must reflect something that is about to go incredibly wrong “down here.”  The modern mind may, rightly, dismiss many of these interpretations as pre-scientific ignorance of what is really happening in the night sky. (The Church does, after all, condemn astrology.)  However, we still look at these same objects for warnings and blessings, but in different ways than did the ancients. 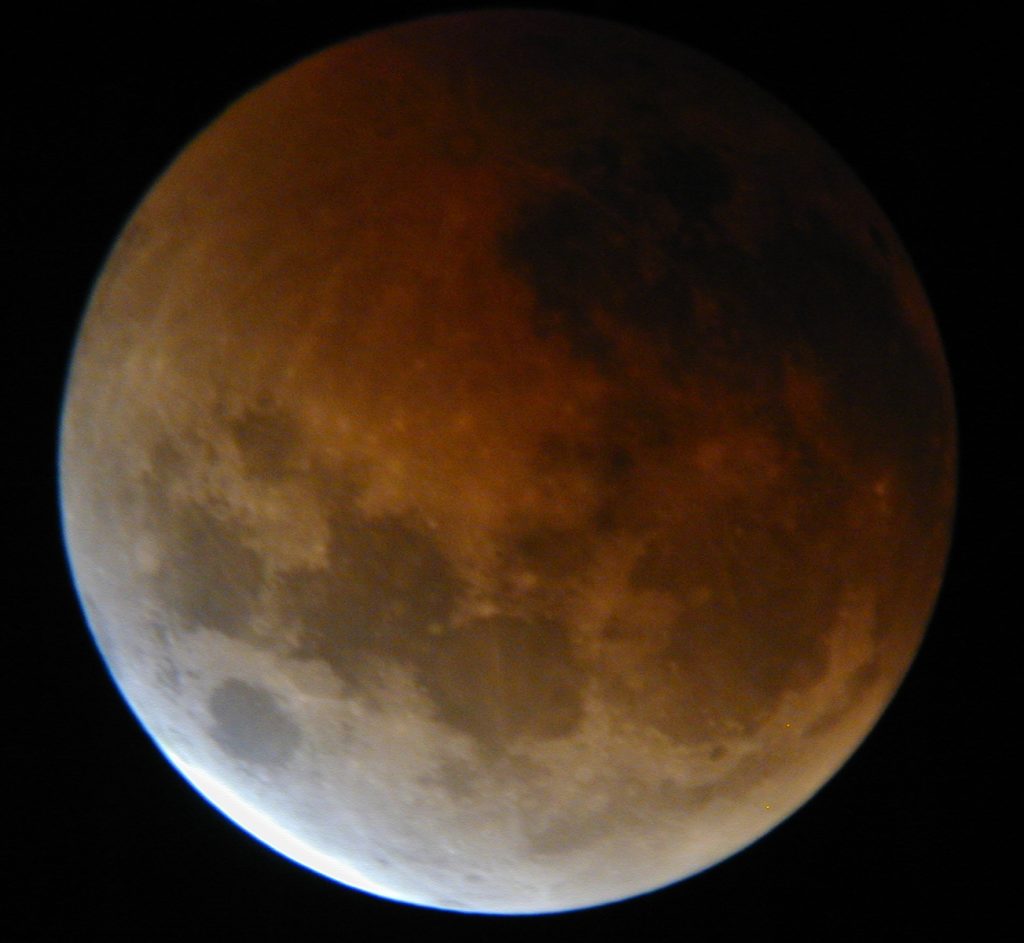 For example, as I shared in my last post, scientists can gaze upon a lunar eclipse to get a “report card” on the condition of the earth’s atmosphere.  Therefore, gazing “up there” at the moon gives us a real symbol of what is going on “down here” as we try to understand how our ecological decisions impact our planet.  When comets and near Earth objects are discovered, there is a foreboding moment, waiting for an interpretation of whether or not these objects are a threat to Earth or not.  These objects may not reflect a war that is looming on our Earth, but it can rally the “scientific troops” to action, mounting a “counter assault” in a battle that must be won, lest much or all of our Earth face the devastating effects of a direct impact from these cosmic “prophets of doom.”  At the same time, for objects that are not threatening our planet, there is a curiosity about how we can use them to understand the origins of our Solar System and one day, perhaps, harness them to provide natural resources for our planet in the future.  War and peace, blessings and curses, death and life, these reflections remind me of the most popular passage from the book of Ecclesiastes.

Just as the ancients, we look to the “affairs of the heavens,” to borrow the language from Ecclesiastes, to help us understand the affairs of the Earth.  As the oft-quoted cliche affirms, “The more things change, the more they stay the same.”  Even the mathematical proportions of modern science are used in modern music.  Some have even proposed that the Theory of Relativity predicts that there is a real, naturally occurring “music” to the universe.  Whether it be the explosive physics that creates the inner “song” of a star or the “banging on the drum” of spacetime by black holes, to quote Sonny and Cher, the beat goes on.

Janna Levin speculating on what the “sound” of a black hole pounding on spacetime may be like.

Now, the point of divergence in my attempt to demonstrate a connectedness between how the ancients interpreted the heavens and how modern society interprets the heavens is the way in which one personally applies all of this data to their given craft.  Artists, musicians, poets, and scientists will always differ on the interpretive lenses of connecting us with creation and God.  For example, does the artist wish to express a canvas of exacting proportions or something more chaotic, trying to give voice to the decaying nature of the universe?  Does the musician simply take the mathematical proportions found in certain equations and freely create a piece of music with these numbers or do they try to take the “actual sounds” of space and incorporate them into a piece of music. (I put “actual sounds” in quotations because much of the understanding of the sounds of space are speculations since we cannot hear sound in space apart from our earth.)  Further, there emerges for the musician and artist a whole new realm of difficulties when trying to express the non-matieral world through signs, symbols, and sounds contingent upon the material world.  In our eclectic, post-modern world, trying to find a unified vision between faith, science, and the arts is quite difficult.  Nevertheless, the very attempt to do so shows that the disposition of the human heart still tries, in some way, to knit our world together into a cohesive, understandable whole that can help us have a sense of connectedness with our world and with our God.

What is it about our natural world that helps you feel connected with creation and God?  Share your thoughts and, together, may we continue humanity’s natural desire to gaze at the heavens above, explore the earth below, and listen in silent contemplation for God to orchestrate his symphony of love in our hearts and in the world.