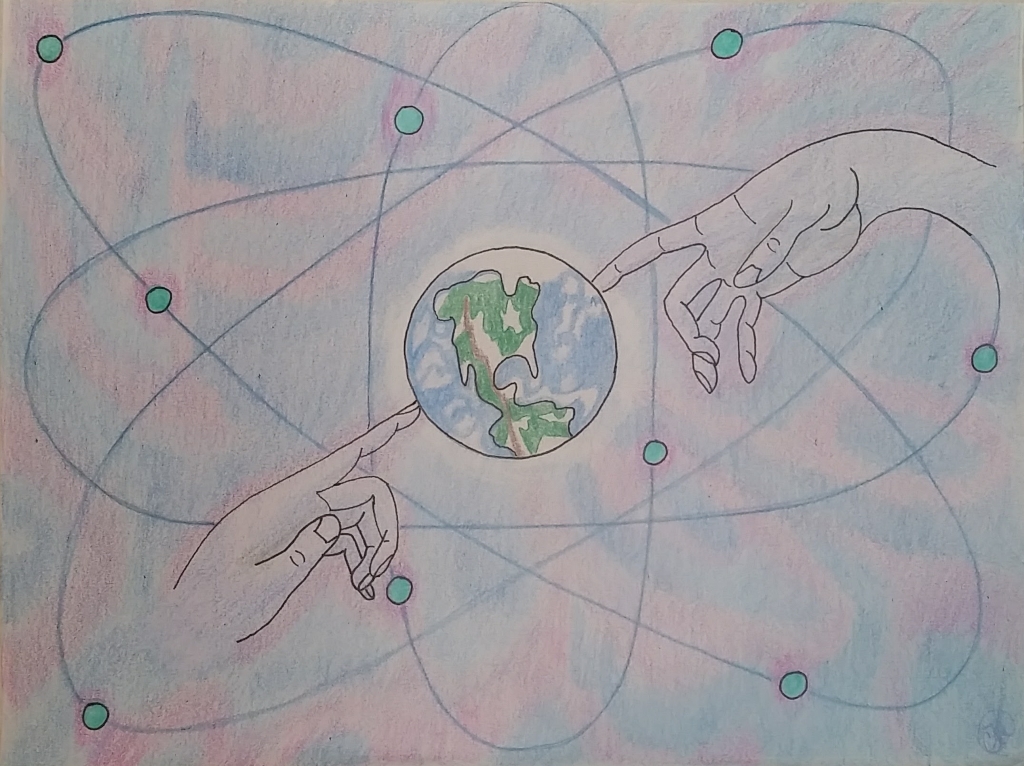 When people ask me what I do for a living I generally respond:  For the past 16 years I have been teaching science to the hormonally impaired. Here in the United States that means teaching sixth through eighth grade, i.e., my students range from 10 to 14 years old.  These students are either entering the fun age of puberty, or are in the complete throws of hormonal impairment , which means they have other things on their mind besides studying. About this time of year I usually enter into the biology phase of science with my 7th graders; and inevitably, the introduction of cells leads to a discussion of evolution and God.

I teach in a small town in southeast Michigan called New Haven. The religious base of this town is either Baptist or Lutheran, along with some Catholics and various other religions. When I bring up that prokaryotic cells eventually evolved into eukaryotic cells (single-celled organisms into complex multi-celled organisms), the hands in the classroom race to the sky immediately.  Excitement mounts as questions are hurled in my direction at the speed of light, “The Bible says God created the Earth in seven days,” “Evolution doesn’t exist,” “Do you believe in life in outer space?”. Needless to say the lesson is generally brought to a halt until some of these questions have been addressed. The one thing I have learned teaching this age group is that they do not trust easily; and if you put off their inquiries or treat them as unimportant, then you have lost them and will never regain their trust. Besides, I view this as a wonderful teaching moment, both about the world around them as well as a lesson in tolerance.

My standard answer to the question “Do you believe in life in outer space?” is, where do you think you are? This causes dead silence as the students look from one to another and stunned smiles appear as they realize I am right. They are life that is in outer space; they have just never looked at it from that perspective before. Do I believe in life other than ourselves? Of course I believe in that possibility. In our own Milky Way Galaxy there are hundreds of billions of stars, and each of those stars is believed to have at least one planet orbiting it. Now I clarify that I do not necessarily believe that this life is going to be human as we are. Life takes in a wide range, everything from those simple prokaryotic cells to perhaps something more complex. Remember, finding bacteria still means finding life and cannot be discounted.  It is a delicate balancing act to help my students understand the science and facts behind their questions without dismissing their beliefs.

Evolution is not a dirty word, I tell them, it simply means to change over time and those changes allow organisms to survive. I point out that they themselves evolve over the course of their lives from a small helpless infant dependent on others for their survival, to; (hopefully), productive members of society where they can take care not only of themselves but others as well. When they look up at the night sky, the stars they see all go through something called stellar evolution. They begin as a protostar; ignite and begin their lives as a star; spend the majority of their lives as a main-sequence star; and end whether in a spectacular super nova, or quietly as a white dwarf. They move through a series of changes called evolution until they reach their end. We have seen the existence of evolution on our own planet with antibiotic resistant bacteria; our own bodies slowly removing unneeded organs such as our appendix; and in something as simple as the songs that birds sing. It is important that they understand that evolution is not a bad word. NO, we did not evolve from monkeys. Evidence shows that at some point millions of years ago the line that would become human, and the one that would lead to apes all descended from a similar ancestor and this is huge distinction.

This always leads to the shouted statements that God created the Earth in seven days. Again, I will state that it is important to respect the children’s theological beliefs, but I do remind them that they are beliefs, and that those beliefs do not have to be separate from scientific fact. This is the point where I throw my students for a loop by asking them how long one of God’s days is? This causes complete silence as they look about the room for help. I explain to them that it is important for them to think and not just repeat doctrine that they have been taught. Whether you believe that we were made in his image or not, that does not mean that one of God’s days is the same as one of Earth’s days.

I explain that a day here on Earth is 24 hours, yet there are planets whose days measure less than 10 hours, and some measure over 200 Earth days. If they are going to choose to believe that God formed our planet and all living things in 7 days, they first have to discover how long one of those days is. They cannot base God’s day on the rotation of our planet because their belief system also says that God created all of the planets and stars in the heavens. It is difficult when a child is placed in the middle of scientists who wish to proclaim that there is no God, and the religious right which proclaim they do not accept the findings of science, when the truth may lie somewhere in the middle.

I explain to my students that if they believe in an all-powerful creator, then they must admit that this creator gave them a mind which he expects them to use to think. To assume that they know what God’s intentions are is to assume that they know God’s mind, and that is extremely egotistical. If he is as powerful as you wish me to believe than couldn’t he have a plan for this planet? How do you know that this plan is not unfolding as it should? If God is powerful enough to create the Earth and everything on it, then this supreme being is powerful enough to have set things in motion in a time long before their own minds can comprehend. They must learn to think when someone wants to tell them that dinosaurs did not exist, or that evolution is a fallacy, there is evidence that contradict these statements. They must learn to think outside of the box they have been placed in and see that there is room for their religious beliefs and science.

I try to end my lesson helping my students understand that it doesn’t have to be one way or the other. Science does not destroy God, and God does not destroy science, the truth lies somewhere in the middle. Stand strong in your beliefs but do not turn a blind eye to evidence that God has presented you with. I didn’t realize how strongly I myself conveyed this belief to my students until I received an Amen and a Hallelujah, which caused me to burst out in laughter.  Now if you know anything about seventh graders, there is always one last question, usually asked with only moments of class time to spare, “How do you know God is a he?”… *sigh*, discussion for another class.