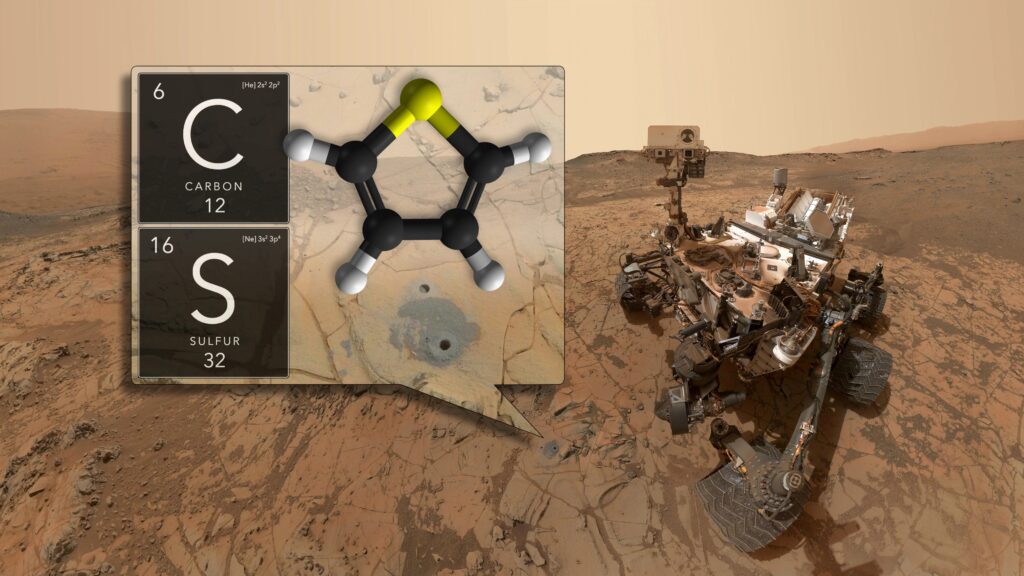 NASA’s Curiosity rover has found new evidence preserved in rocks on Mars that suggests the planet could have supported ancient life, as well as new evidence in the Martian atmosphere that relates to the search for current life on the Red Planet. While not necessarily evidence of life itself, these findings are a good sign for future missions exploring the planet’s surface and subsurface.

The new findings — “tough” organic molecules in 3-billion-year-old sedimentary rocks near the surface, as well as seasonal variations in the levels of methane in the atmosphere — appear in the June 8 edition of the journal Science.

Organic molecules contain carbon and hydrogen, and also may include oxygen, nitrogen and other elements. While commonly associated with life, organic molecules also can be created by non-biological processes and are not necessarily indicators of life.

“Are there signs of life on Mars? We don’t know, but these results tell us we are on the right track.”

“With these new findings, Mars is telling us to stay the course and keep searching for evidence of life,” said Thomas Zurbuchen, associate administrator for the Science Mission Directorate at NASA Headquarters, in Washington. “I’m confident that our ongoing and planned missions will unlock even more breathtaking discoveries on the Red Planet.”

“Curiosity has not determined the source of the organic molecules,” said Jen Eigenbrode of NASA’s Goddard Space Flight Center in Greenbelt, Maryland, who is lead author of one of the two new Science papers. “Whether it holds a record of ancient life, was food for life, or has existed in the absence of life, organic matter in Martian materials holds chemical clues to planetary conditions and processes.” 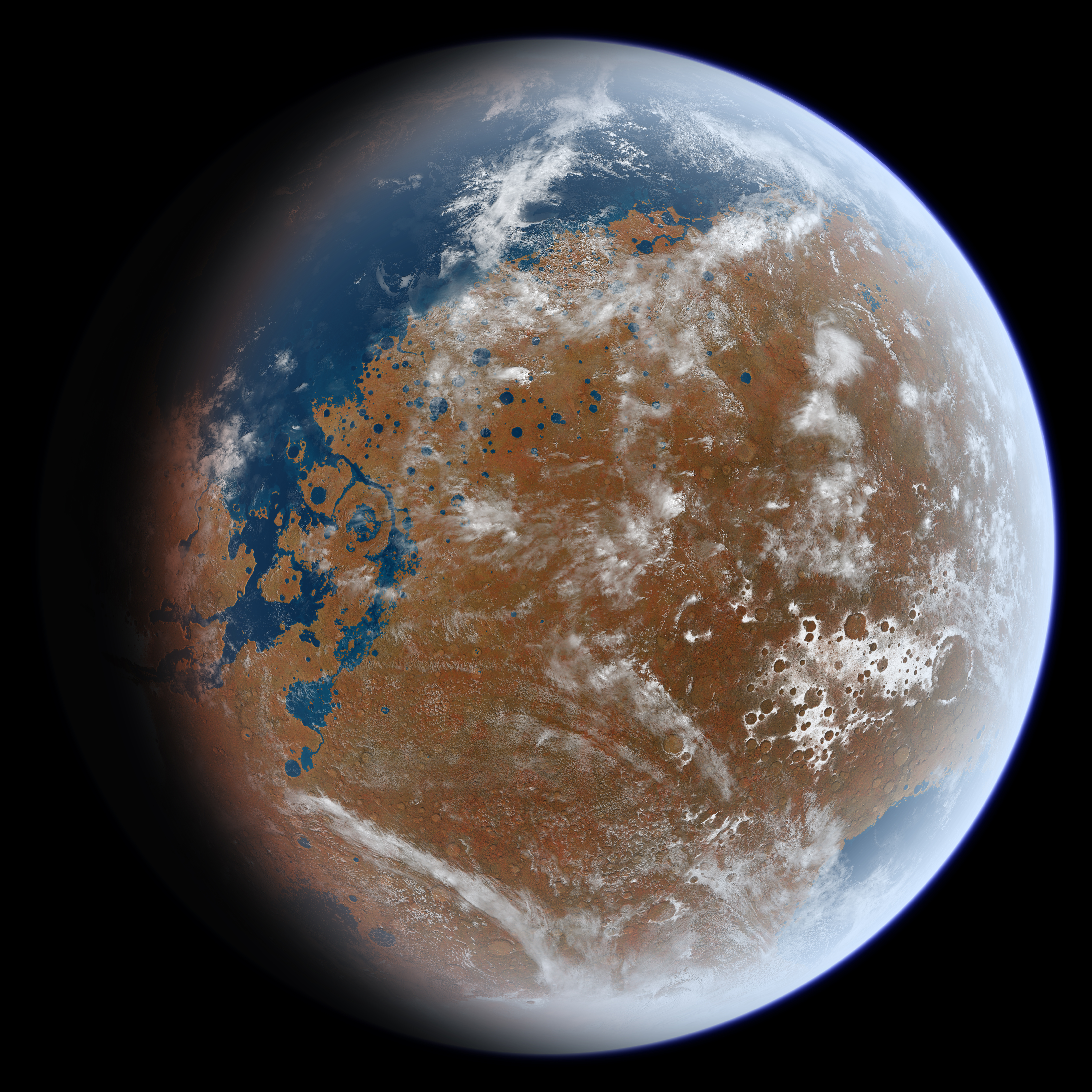 Artist’s impression of what ancient Mars may have looked like, based on geological data.

Although the surface of Mars is inhospitable today, there is clear evidence that in the distant past, the Martian climate allowed liquid water – an essential ingredient for life as we know it – to pool at the surface. Data from Curiosity reveal that billions of years ago, a water lake inside Gale Crater held all the ingredients necessary for life, including chemical building blocks and energy sources.

“The Martian surface is exposed to radiation from space. Both radiation and harsh chemicals break down organic matter,” said Eigenbrode. “Finding ancient organic molecules in the top five centimeters of rock that was deposited when Mars may have been habitable, bodes well for us to learn the story of organic molecules on Mars with future missions that will drill deeper.”

In the second paper, scientists describe the discovery of seasonal variations in methane in the Martian atmosphere over the course of nearly three Mars years, which is almost six Earth years. This variation was detected by Curiosity’s Sample Analysis at Mars (SAM) instrument suite.

Water-rock chemistry might have generated the methane, but scientists cannot rule out the possibility of biological origins. Methane previously had been detected in Mars’ atmosphere in large, unpredictable plumes. This new result shows that low levels of methane within Gale Crater repeatedly peak in warm, summer months and drop in the winter every year.

“This is the first time we’ve seen something repeatable in the methane story, so it offers us a handle in understanding it,” said Chris Webster of NASA’s Jet Propulsion Laboratory in Pasadena, California, lead author of the second paper. “This is all possible because of Curiosity’s longevity. The long duration has allowed us to see the patterns in this seasonal ‘breathing.'”

To identify organic material in the Martian soil, Curiosity drilled into sedimentary rocks known as mudstone from four areas in Gale Crater. This mudstone gradually formed billions of years ago from silt that accumulated at the bottom of the ancient lake. The rock samples were analyzed by SAM, which uses an oven to heat the samples (in excess of 900 degrees Fahrenheit, or 500 degrees Celsius) to release organic molecules from the powdered rock.

The results also indicate organic carbon concentrations on the order of 10 parts per million or more. This is close to the amount observed in Martian meteorites and about 100 times greater than prior detections of organic carbon on Mars’ surface. Some of the molecules identified include thiophenes, benzene, toluene, and small carbon chains, such as propane or butene.

In 2013, SAM detected some organic molecules containing chlorine in rocks at the deepest point in the crater. This new discovery builds on the inventory of molecules detected in the ancient lake sediments on Mars and helps explains why they were preserved. 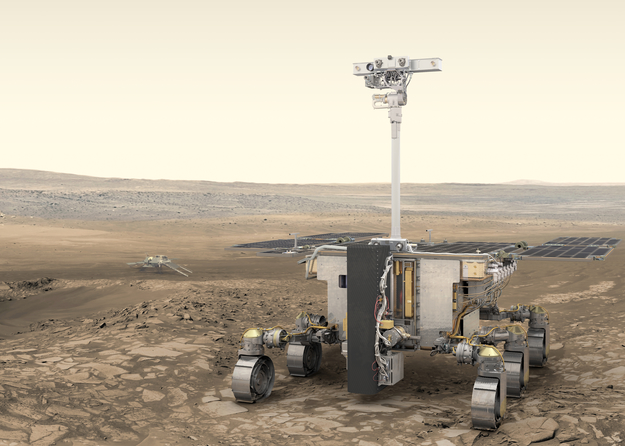 Artist’s impression of the ExoMars rover on the surface of Mars. Credit: ESA/ATG medialab

Finding methane in the atmosphere and ancient carbon preserved on the surface gives scientists confidence that NASA’s Mars 2020 rover and ESA’s (European Space Agency’s) ExoMars rover will find even more organics, both on the surface and in the shallow subsurface.

These results also inform scientists’ decisions as they work to find answers to questions concerning the possibility of life on Mars.

“Are there signs of life on Mars?” said Michael Meyer, lead scientist for NASA’s Mars Exploration Program, at NASA Headquarters. “We don’t know, but these results tell us we are on the right track.”

This work was funded by NASA’s Mars Exploration Program for the agency’s Science Mission Directorate (SMD) in Washington. Goddard provided the SAM instrument. JPL built the rover and manages the project for SMD.

For video and images of the findings, visit: https://www.nasa.gov/mediaresources

Information on NASA’s Mars activities is available online at: https://www.nasa.gov/mars