November’s Dance of the Planets

November’s crisp autumn skies bring great views of our planetary neighbors. The Moon pairs up with Saturn and Mars in the evenings, and mornings feature eye-catching arrangements with dazzling Venus. Stargazers wanting a challenge can observe a notable opposition by asteroid 3 Juno on the 17th and watch for a few bright Leonid meteors.

Red Mars gleams high in the southern sky after sunset. Saturn sits westward in the constellation Sagittarius. A young crescent Moon passes near Saturn on the 10th and 11th. On the 15th a first quarter Moon skims by Mars, coming within 1 degree of the planet.

The red planet receives a new visitor on November 26th, when NASA’s InSight mission lands and begins its investigation of the planet’s interior. News briefings and commentary will be streamed live at: bit.ly/landsafe

Two bright planets hang low over the western horizon after sunset as November begins: Jupiter and Mercury. They may be hard to see, but binoculars and an unobstructed western horizon will help determined observers spot them right after sunset. Both disappear into the Sun’s glare by mid-month. 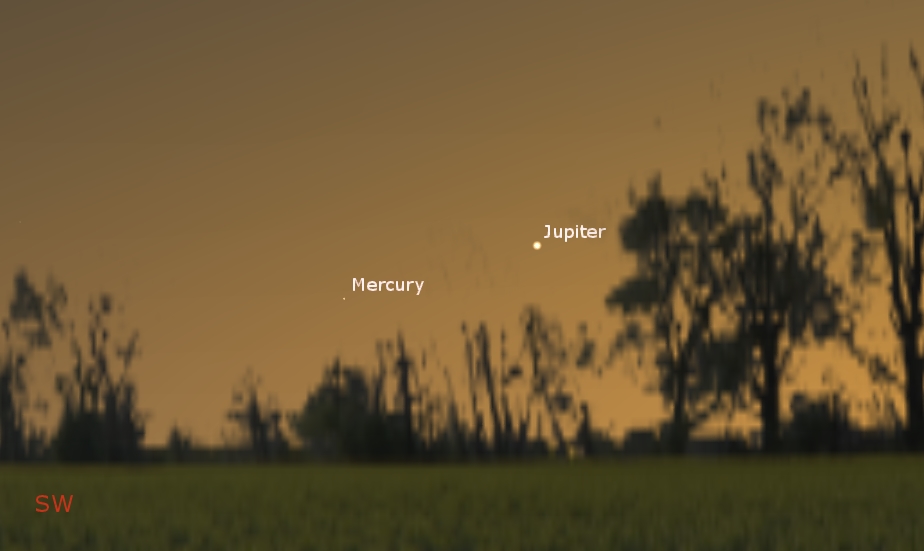 Jupiter and Mercury in the southwestern sky at dusk on Nov. 1, 2018. Credit: Stellarium / Bob Trembley.

Early risers are treated to brilliant Venus sparkling in the eastern sky before dawn, easily outshining everything except the Sun and Moon. On November 6th, find a location with clear view of the eastern horizon to spot Venus next to a thin crescent Moon, making a triangle with the bright star Spica. The following mornings watch Venus move up towards Spica, coming within two degrees of the star by the second full week of November. Venus will be up three hours before sunrise by month’s end – a huge change in just weeks! Telescopic observers are treated to a large, 61” wide, yet razor-thin crescent at November’s beginning, shrinking to 41” across by the end of the month as its crescent waxes.

Observers looking for a challenge can hunt asteroid 3 Juno, so named because it was the third asteroid discovered. Juno travels through the constellation Eridanus and rises in the east after sunset. On November 17th, Juno is at opposition and shines at magnitude 7.4, its brightest showing since 1983! Look for Juno near the 4.7 magnitude double star 32 Eridani in the nights leading up to opposition. It is bright enough to spot through binoculars, but still appears as a star-like point of light. If you aren’t sure if you have identified Juno, try sketching or photographing its star field, then return to the same area over the next several days to spot its movement. 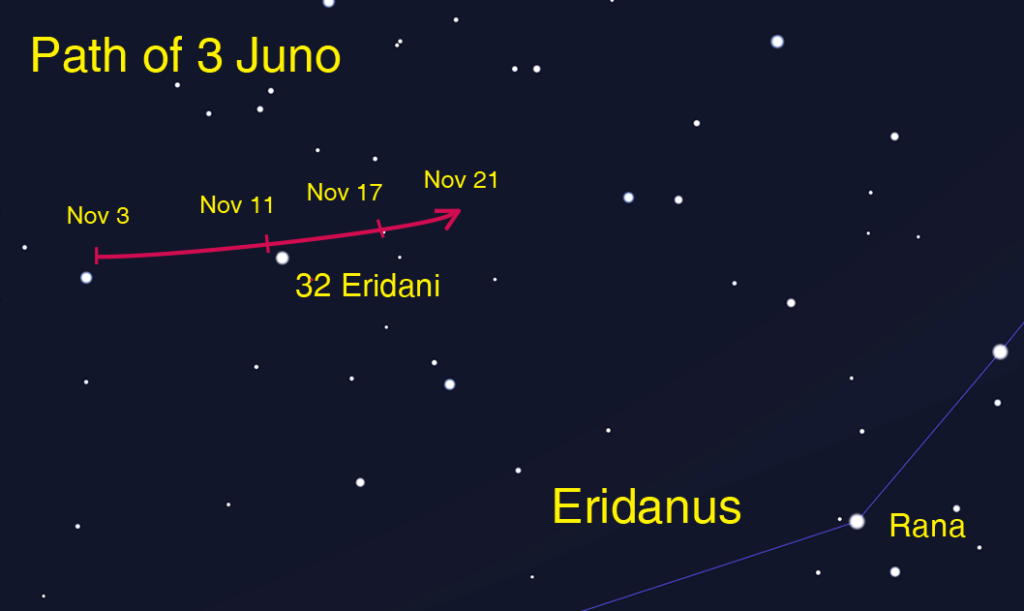 This finder chart shows the path of the asteroid 3 Juno as it glides past 32 Eridani in November 2018. The asteroid’s position is highlighted for selected dates, including its opposition on the 17th. Image created in Stellarium for NASA Night Sky Network.

The Leonids are expected to peak on the night of the 17th through the morning of the 18th. This meteor shower has brought “meteor storms” as recently as 2002, but a storm is not expected this year. All but the brightest meteors will be drowned out by a waxing gibbous Moon.

Stay warm and enjoy this month’s dance of the planets!

You can catch up on all of NASA’s current and future missions at nasa.gov

This article is distributed by NASA Night Sky Network