A Close-Up View of Mars

In July 2018, skywatchers can get an up close view of Mars—even without a telescope! In fact, on July 31, Mars will be closer to Earth than it has been in 15 years.

Like all the planets in our solar system, Earth and Mars orbit the Sun. Earth is closer to the Sun, and therefore it races along its orbit more quickly. Earth makes two trips around the Sun in about the same amount of time that Mars takes to make one trip.

Sometimes the two planets are on opposite sides of the Sun and are very far apart. Other times, Earth catches up with its neighbor and passes relatively close to it. This is called Mars’s closest approach to Earth, and it’s happening this year on July 31. The Moon will be near Mars on that night, too!

Keep in mind that even during its closest approach, Mars is still more than 35 million miles away from Earth. That’s really far. So, Mars won’t appear as big as the Moon in the sky, but it will appear bigger than it usually does.

July and August will be a great time to check out Mars. Through a telescope, you should normally be able to make out some of the light and dark features of the Red Planet—and sometimes even polar ice. However, a huge Martian dust storm is obscuring these features right now, so less planetary detail is visible.

Animation of the growth of the giant dust storm on Mars, with rovers on the surface indicated as icons. Credit: NASA/JPL-Caltech/MSSS

There is another important Mars date in July: Mars opposition. Mars opposition is when Mars, Earth and the Sun all line up, with Earth directly in the middle. This event is happening on July 27 this year. 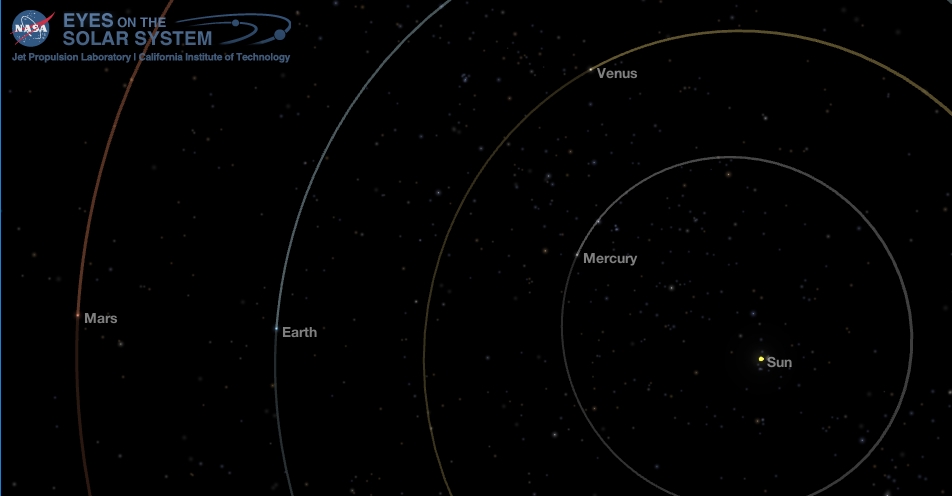 Although you may see news focusing on one of these two dates, Mars will be visible for many months. For about three weeks before and three weeks after opposition and closest approach, the planet will appear the same size to a skywatcher.

From July 7 through September 7 Mars will be the third brightest object in the sky (after the Moon and Venus), shining even brighter than Jupiter. The best time to view Mars during this time is several hours after sunset, when Mars will appear higher in the sky.

Mars will still be visible after July and August, but each month it will shrink in size as it travels farther from Earth in its orbit around the Sun.

In other sky news, there will be a partial solar eclipse on July 13, but it will only be visible from Northern Antarctica and southern Australia. On July 27 (beginning at 20:21 UTC), a total lunar eclipse will be visible in Australia, Asia, Africa, Europe and South America. For those viewers, Mars will be right next to the eclipsing Moon!

If you’re wanting to look ahead to next month, prepare for August’s summer Perseid meteor shower. It’s not too early to plan a dark sky getaway for the most popular meteor shower of the year! 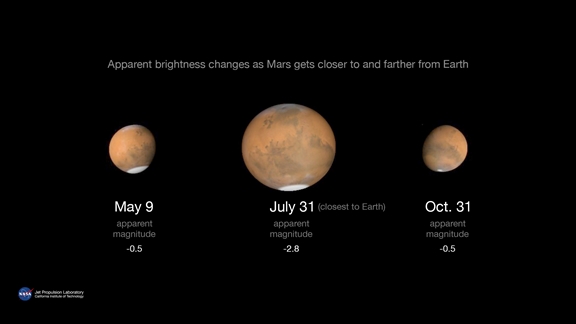