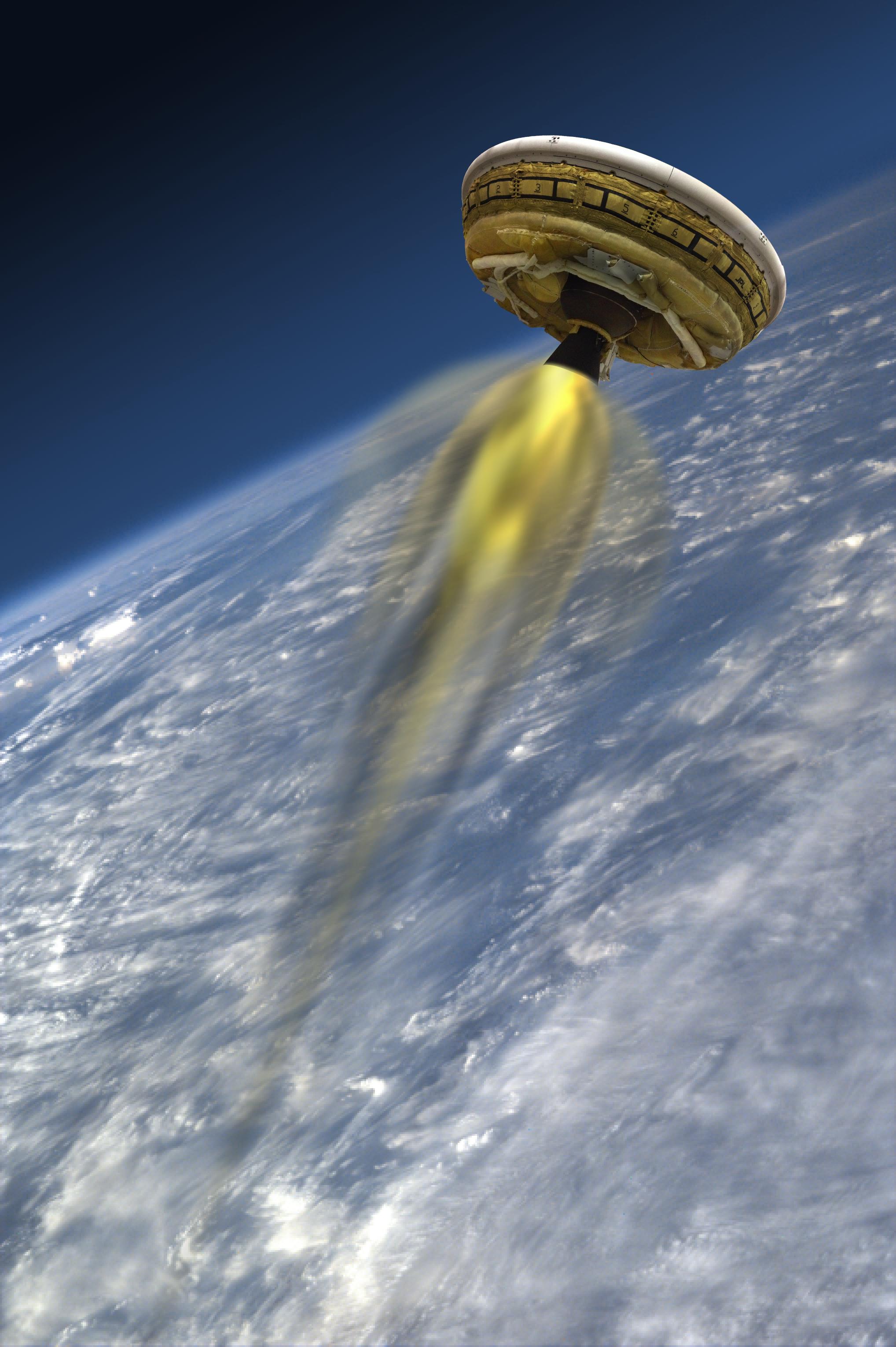 Looking every bit like a stereotypical flying saucer, NASA’s Low-Density Supersonic Decelerator (LDSD) would be used to safely decelerate larger and heavier payloads, traveling at supersonic speeds, in the thin atmosphere of Mars. Full-scale parachutes and drag devices will be tested high in Earth’s stratosphere – and you get to watch it streaming on the Internet! Testing will be continue through 2016.

From the JPL article:

Since Orville Wright first took to the skies over Kitty Hawk, North Carolina, experimental flight tests have been a relatively singular affair, with aviators taking their untried machines into the sky in search of good data and a great hangar story. But nowadays, cutting-edge testing of air and space machines has become somewhat more accessible. This week offers up another opportunity to witness an important milestone in experimental flight tests. NASA’s Low-Density Supersonic Decelerator (LDSD) project will beam back to Earth live imagery from a supersonic, edge-of-atmosphere test of braking technology for Mars.

First off — what will you see?

“You get to see all the same video I do, at the same time I do,” said Mark Adler, project manager for LDSD at NASA’s Jet Propulsion Laboratory in Pasadena, California. “This year’s test is centered on how our newly-designed supersonic parachute will perform. We think we have a great design ready for the challenge, but the proof is in the pudding and the pudding will be made live for everyone to see.”

So what exactly is that?

On launch day — currently slated for June 2, but dependent on weather conditions — the LDSD test vehicle will be carried aloft by a large weather balloon. NASA Television and JPL’s Ustream channel will carry live commentary on the launch beginning at 1 p.m. EDT (10 a.m. PDT/7 a.m. HST).

Live video commentary is expected to return about 20 minutes before the LDSD test vehicle drops away from the balloon and the rocket-powered portion of the flight test begins. This second part of commentary could begin as soon as two hours after balloon launch or as late as about five hours after launch.

When the commentary resumes, viewers will see live, low-resolution images from high over the Pacific Ocean off the west coast of Kauai, Hawaii. Four cameras aboard the test vehicle will provide the LDSD mission team with different perspectives on the test. Two of the cameras provide views of the rim of the test vehicle and will show the performance of the Supersonic Inflatable Aerodynamic Decelerator (SIAD). A third camera will show the rocket motor firing, with Earth’s horizon spinning in the background (the vehicle is spin-stabilized during the rocket flight), along with the deployment of the parachute’s lanyards. The fourth camera looks directly up and will show the deployment of the ballute and supersonic parachute. 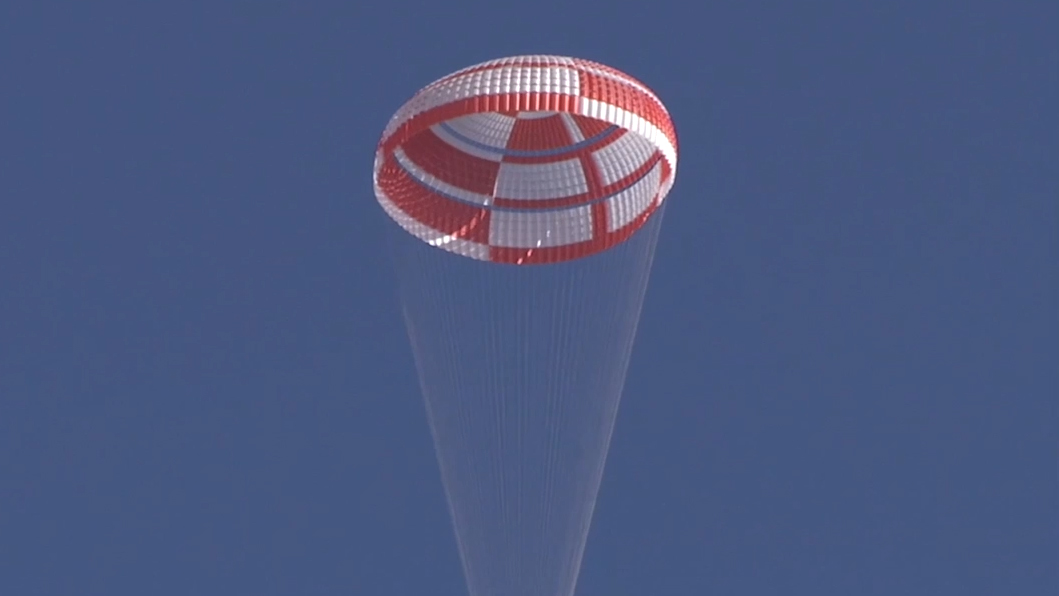 The Supersonic Ringsail parachute that will be used during the Low-Density Supersonic Decelerators test this June from Kauai, Hawaii, was first tested at the Naval Air Weapons Station China Lake, California, on February 18. Credits: NASA/JPL-Caltech/US Navy

“What we will be looking most closely for is to see what happens on that fourth camera, when at Mach 2.35 our supersonic parachute is deployed,” said Adler. “It may be hard to see because the transmitted video is low resolution, but we hope to be able to make it out.”

During last year’s flight, the test vehicle and the SIAD worked flawlessly. Its parachute, however — the largest supersonic parachute ever flown — did not perform as planned. Numerous improvements have been made to this year’s chute – which will be the primary focus of this month’s test.

The low-resolution imagery that is downlinked live and carried on NASA TV will be supplanted in the days after the test by ultra-high-resolution imagery from cameras carried aboard the test vehicle (see http://www.jpl.nasa.gov/news/news.php?feature=4604).

When and where do I tune in?

NASA commentary will be carried on NASA TV and on the Web at http://www.nasa.gov/nasatv and http://www.ustream.tv/nasajpl2. The test launch window for LDSD is from June 2 to June 12, and extends each day from approximately 1:30 p.m. to 3 p.m. EDT (10:30 to noon PDT / 7:30 to 9 a.m. HST). For updates on launch status, follow @NASA_Technology and @NASA on Twitter or visit: http://www.nasa.gov/ldsd

On launch day, these same sources will provide updates on when commentary will resume with the drop and test flight of vehicle.

The LDSD crosscutting demonstration mission will test breakthrough technologies that will enable large payloads to be safely landed on the surface of Mars, and also will allow access to more of the planet’s surface by enabling landings at higher-altitude sites. As NASA plans ambitious robotic science missions to Mars, laying the groundwork for even more complex human expeditions to come, the spacecraft needed to land safely on the Red Planet’s surface will become larger and heavier in order to accommodate explorers’ extended stays on the Martian surface. 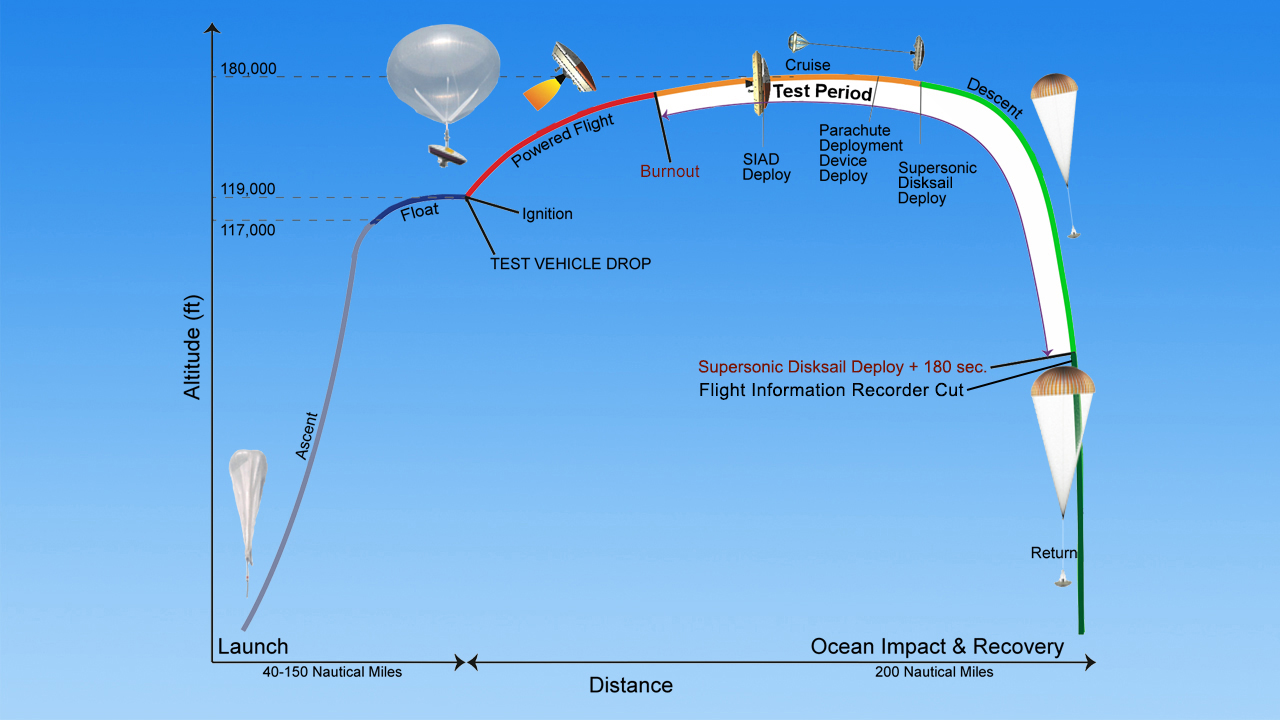 For more information on the LDSD SIAD, ballute and parachute, see the 2015 LDSD Press Kit: http://www.jpl.nasa.gov/news/press_kits/ldsd2015.pdf

For more updates about the test flight and more information about the LDSD project, visit: http://www.nasa.gov/ldsd