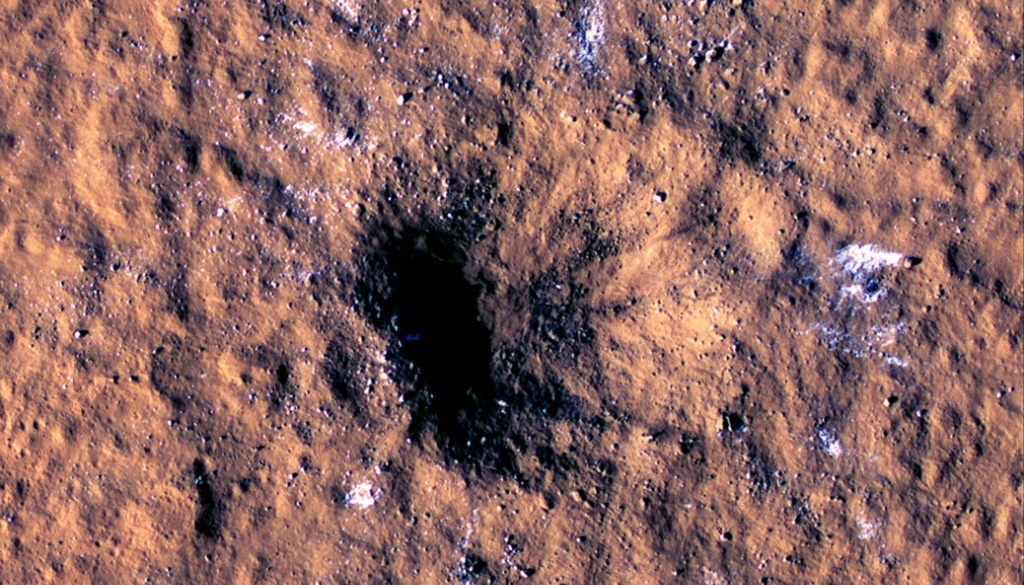 The agency’s lander felt the ground shake during the impact while cameras aboard the Mars Reconnaissance Orbiter spotted the yawning new crater from space.

NASA’s InSight lander recorded a magnitude 4 marsquake last Dec. 24, but scientists learned only later the cause of that quake: a meteoroid strike estimated to be one of the biggest seen on Mars since NASA began exploring the cosmos. What’s more, the meteoroid excavated boulder-size chunks of ice buried closer to the Martian equator than ever found before – a discovery with implications for NASA’s future plans to send astronauts to the Red Planet.

Scientists determined the quake resulted from a meteoroid impact when they looked at before-and-after images from NASA’s Mars Reconnaissance Orbiter (MRO) and spotted a new, yawning crater. Offering a rare opportunity to see how a large impact shook the ground on Mars, the event and its effects are detailed in two papers published Thursday, Oct. 27, in the journal Science.

The meteoroid is estimated to have spanned 16 to 39 feet (5 to 12 meters) – small enough that it would have burned up in Earth’s atmosphere, but not in Mars’ thin atmosphere, which is just 1% as dense as our planet’s. The impact, in a region called Amazonis Planitia, blasted a crater roughly 492 feet (150 meters) across and 70 feet (21 meters) deep. Some of the ejecta thrown by the impact flew as far as 23 miles (37 kilometers) away.

With images and seismic data documenting the event, this is believed to be one of the largest craters ever witnessed forming any place in the solar system. Many larger craters exist on the Red Planet, but they are significantly older and predate any Mars mission.

“It’s unprecedented to find a fresh impact of this size,” said Ingrid Daubar of Brown University, who leads InSight’s Impact Science Working Group. “It’s an exciting moment in geologic history, and we got to witness it.”

InSight has seen its power drastically decline in recent months due to dust settling on its solar panels. The spacecraft now is expected to shut down within the next six weeks, bringing the mission’s science to an end.

InSight is studying the planet’s crust, mantle, and core. Seismic waves are key to the mission and have revealed the size, depth, and composition of Mars’ inner layers. Since landing in November 2018, InSight has detected 1,318 marsquakes, including several caused by smaller meteoroid impacts.

But the quake resulting from last December’s impact was the first observed to have surface waves – a kind of seismic wave that ripples along the top of a planet’s crust. The second of the two Science papers related to the big impact describes how scientists use these waves to study the structure of Mars’ crust.

In late 2021, InSight scientists reported to the rest of the team they had detected a major marsquake on Dec. 24. The crater was first spotted on Feb. 11, 2022, by scientists working at Malin Space Science Systems (MSSS), which built and operates two cameras aboard MRO. The Context Camera (CTX) provides black-and-white, medium-resolution images, while the Mars Color Imager (MARCI) produces daily maps of the entire planet, allowing scientists to track large-scale weather changes like the recent regional dust storm that further diminished InSight’s solar power.

The impact’s blast zone was visible in MARCI data that allowed the team to pin down a 24-hour period within which the impact occurred. These observations correlated with the seismic epicenter, conclusively demonstrating that a meteoroid impact caused the large Dec. 24 marsquake.

“The image of the impact was unlike any I had seen before, with the massive crater, the exposed ice, and the dramatic blast zone preserved in the Martian dust,” said Liliya Posiolova, who leads the Orbital Science and Operations Group at MSSS. “I couldn’t help but imagine what it must have been like to witness the impact, the atmospheric blast, and debris ejected miles downrange.”

Establishing the rate at which craters appear on Mars is critical for refining the planet’s geologic timeline. On older surfaces, such as those of Mars and our Moon, there are more craters than on Earth; on our planet, the processes of erosion and plate tectonics erase older features from the surface.

New craters also expose materials below the surface. In this case, large chunks of ice scattered by the impact were viewed by MRO’s High-Resolution Imaging Science Experiment (HiRISE) color camera.

Subsurface ice will be a vital resource for astronauts, who could use it for a variety of needs, including drinking water, agriculture, and rocket propellant. Buried ice has never been spotted this close to the Martian equator, which, as the warmest part of Mars, is an appealing location for astronauts.

More About the Missions

I have seen countless images of large settlements on the surface of Mars – like this one:

If this impact had occurred on top of, or nearby such a settlement, it would be a disaster of epic proportions! It’s convenient, but not logical to ignore how many fresh impact craters have been observed on Mars.

I also note that the article mentions that sub-surface water on Mars would be useful to future astronauts. We have to be absolutely sure that there is no extant life on Mars, before there’s any talk about landing Humans there. Try as we might to prevent it, humans WILL introduce Earth-based microbes into the Mars environment.

Mars gets clobbered HARD by asteroids. If humans intend on living there, they’ll probably want to have a robust asteroid tracking and deflection system… And a good emergency alert system!