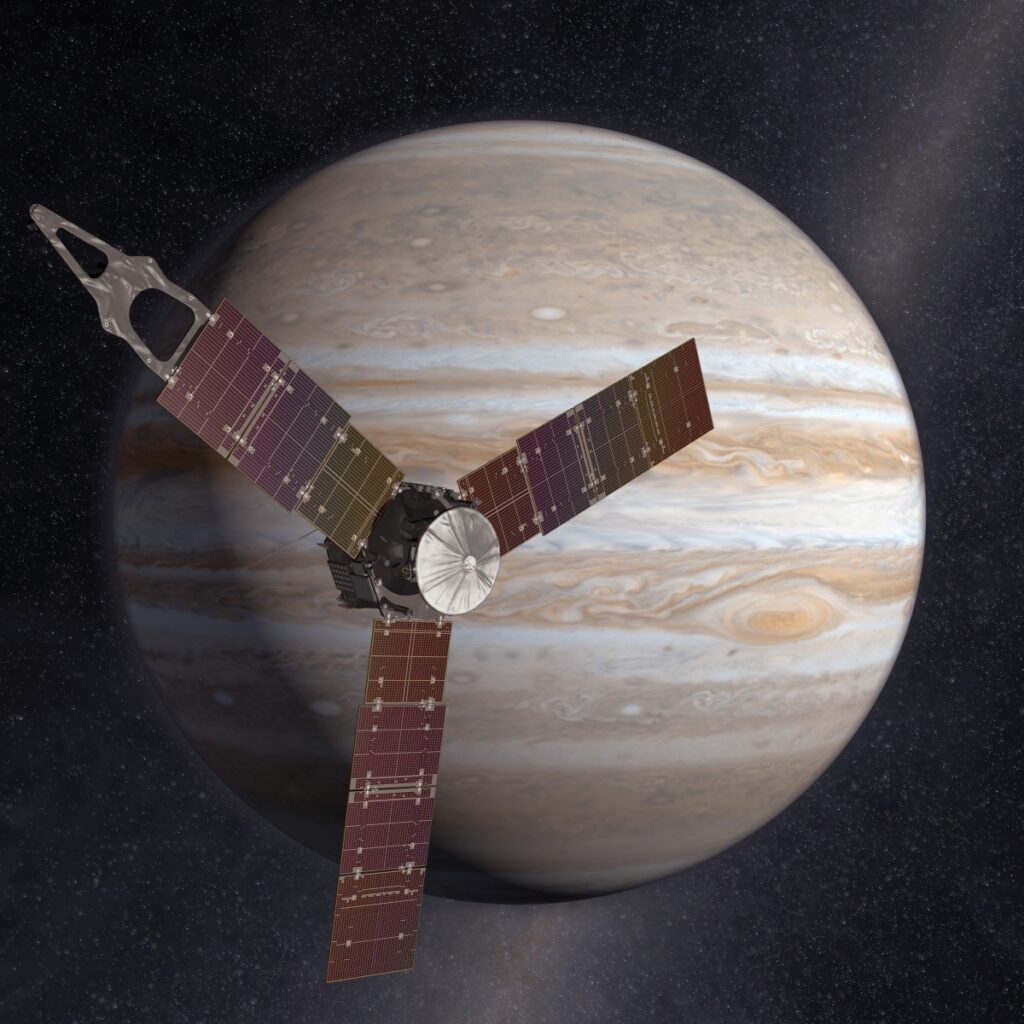 The Juno mission as been on its way to Jupiter since its launch in August of 2011, flying by Earth in October of 2013 for a gravity assist maneuver, and will arrive at the gas giant planet on July 4, 2016 at 8:35 p.m. PDT. Juno is the first solar powered mission to Jupiter, breaking the record for the most distant solar powered spacecraft in January of 2016.

Why Juno? If you want to know how stars and solar systems form, and how planets behave, you have to understand Jupiter. Humans have been studying Jupiter for hundreds of years, yet we still have major unanswered questions about this giant planet:

Jupiter has a huge magnetic field, extending millions of miles out into space, and measuring about 20,000 times stronger than Earth’s magnetic field. This magnetic field captures and accelerates ionized gases ejected by volcanic eruptions from Jupiter’s nearest moon, Io, creating a torus around Jupiter. Jupiter’s rapidly rotating magnetic field heats these ions to thousands of degrees, imparting that energy on to electrons. Large electrical currents flow within the torus, forcing electrons to travel at very high speeds. 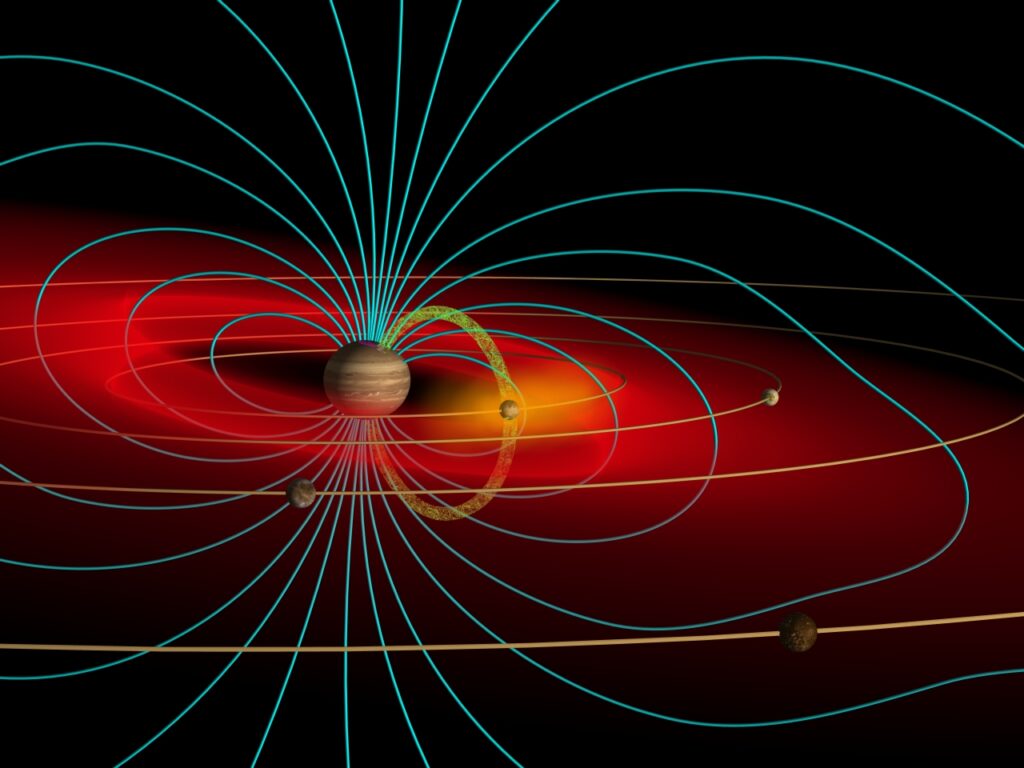 When you look at Jupiter with a radio telescope, all that can be seen is this radiation torus, which effectively masks any radiation coming from the planet itself.

Juno will enter into a polar orbit around Jupiter, coming to within 5,000 km (3,100 mi) above the giant planet’s cloud tops every 11 days. Juno will orbit Jupiter 33 times, during these flybys, Juno will probe deep beneath the cloud cover of Jupiter and study Jupiter’s aurorae to learn more about the planet’s origins, structure, atmosphere and magnetosphere. The polar orbit will provide for complete mapping of the planet’s asymmetric and highly structured magnetic field 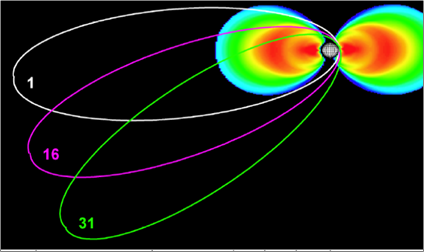 Juno has 8 science instruments that it will use to study Jupiter, and a camera meant for education and outreach: 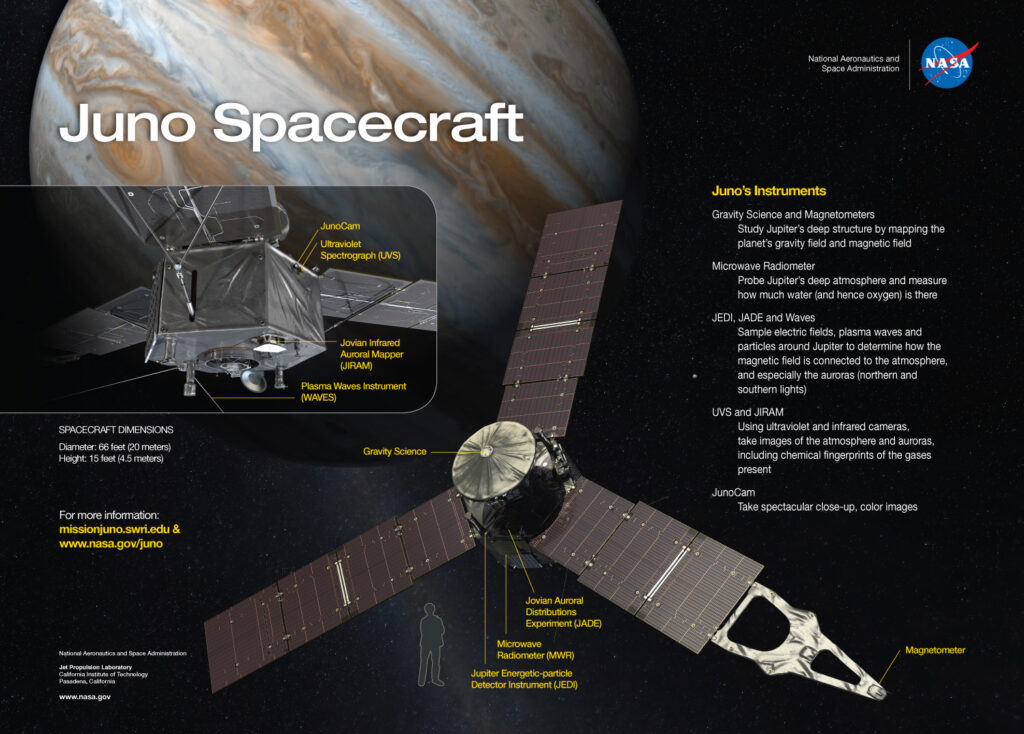 Determine the abundance of water, and place an upper limit on the mass of Jupiter’s solid core to see which of the current theories best matches the observed internal structure.

Understand Jupiter’s interior structure and how material moves deep within the planet by mapping its gravitational and magnetic fields.

Map variations in atmospheric composition, temperature, cloud opacity and dynamics to depths greater than 100 bars at all latitudes.

Characterize and explore the three-dimensional structure of Jupiter’s polar magnetosphere and auroras. 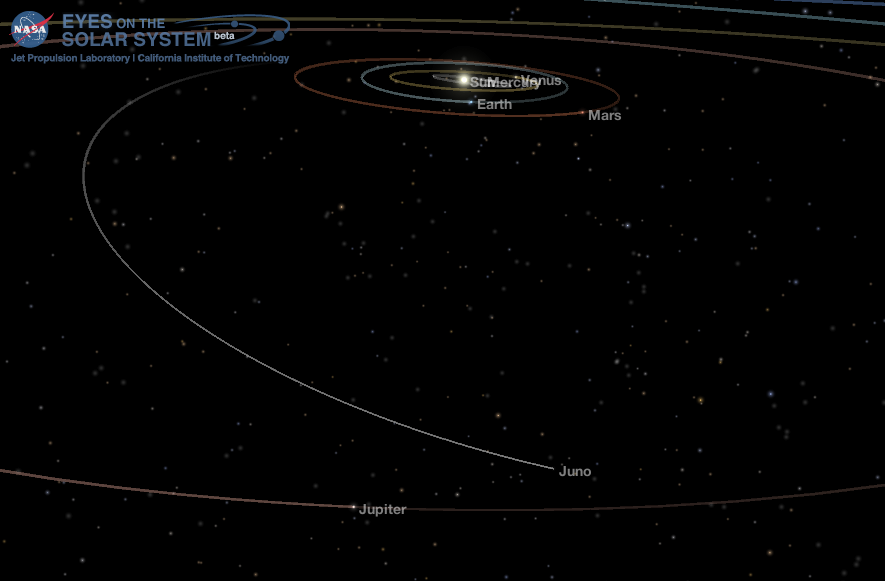 Juno will orbit Jupiter for a year; at its end it’s mission, it will de-orbit and burn up in Jupiter’s atmosphere.