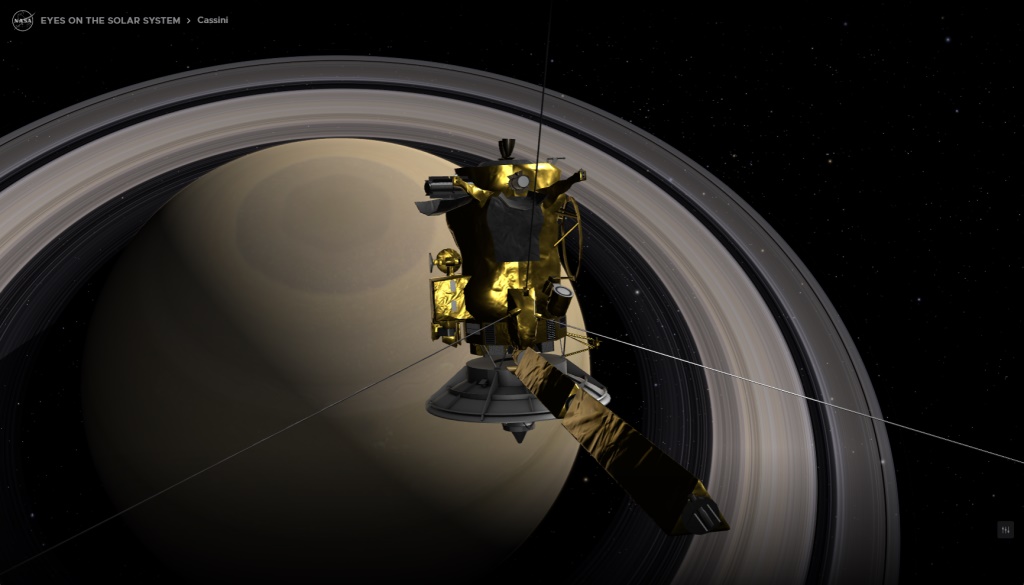 Just in time for the beginning of the school year – NASA has released a new 3D interactive web-based version of their “Eyes on the Solar System” app: https://eyes.nasa.gov/apps/solar-system/. Eyes lets you view numerous bodies in the solar system, and over 120 spacecraft – past, present and future!

The home screen (shown above) displays a live view of the inner solar system at an oblique angle; the left side of the screen has a selection of interactive mission tours, and a pop-out link to the recently released Eyes on Asteroids web app: https://eyes.nasa.gov/apps/asteroids/.

You can rotate, pan and zoom the solar system using the ASWD and QEZC keys – which will be instantly familiar to PC gamers. On mobile, you can control the view with your finger, or pinch-to-zoom. When you hover over an object, it will highlight indicating that you can click on it – if you click on it, you will zoom to that object.

Eyes is a is a fantastic educational tool that is easy to use, and easier still to spend a LOT more time exploring than you might think! The main menu has a selection of major solar system bodies sorted into categories – at the bottom of those categories you can see a complete list of objects to explore.

For several years now NASA has been migrating various modules in the older installable Eyes application over to newer web-based versions. Each of of these apps could get a full article themselves – for this post I’ll cover them briefly.

Eyes on the Earth allows you to track the Earth’s vital signs in near real-time:

Eyes on the Earth is a great tool students in Earth science classes; whenever I launch it, I find myself poking around at the various menu items and finding something new.

The Eyes on Exoplanets app allows you to explore the thousands of planetary systems that have been discovered orbiting distant stars.

Just like the other Eyes apps, you can click on labels and zoom to a depiction of the exoplanet’s system.

You can toggle the systems habitable-zone, and compare the system to our solar system. You can also click on individual exoplanets and see a depiction of what that planet might look like, and compare it with the Earth.

The database the app uses is updated daily with the latest additions to the NASA Exoplanet Archive – which has 5084 confirmed exoplanets at the time of this writing – that’s going to take you a long time to explore!

The Eyes on Asteroids app displays the astounding number of asteroids in the inner solar system, with several bodies of interest highlighted which you can click on and zoom to.

Shape models for asteroids and comets that spacecraft have visited are accurate – several missions have event replays and a clickable timeline. Some bodies have an HD button on the left sidebar that will load high resolution imagery – when I did this, my laptop’s fan kicked in!

At the top of the Eyes on Asteroids app, if you click on Asteroid Watch, you will be taken to a site showing the next five closest asteroid approaches to Earth, with a countdown to the next one highlighted in the left sidebar. Like the other apps, you can rotate and zoom to see how far away they really are. So the next time you see one of those sensational news posts about an asteroid passing “close to the Earth,” you can check out what’s really happening!

Eyes on Asteroids was not a module in the older installable Eyes on the Solar System app – it was created as a web app.

I’m told by the developers that the next release of Web Eyes will display magnetic fields and have a distance tool. The release after that will have planet-wide terrain for Earth, Mars, Ceres, and Vesta! You’ll be able to land anywhere on the planet in 3D; I remember asking on Twitter years ago if there was a tool that would allow me to fly over the surface of Ceres and Vesta – I guess I have my answer.

At some point, the developers would like to add Lagrange points as a selectable entity; I suggested if they were going to do that, have a selection to display Hill Spheres too!

There are some things about the app that I don’t particularly like:

The things I like about the Web Eyes app would fill two pages, so I’ll pick just a few: