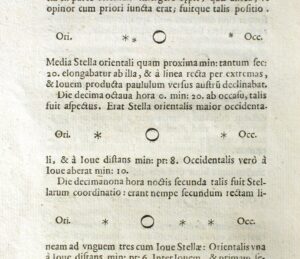 The moons of Jupiter as illustrated by Galileo in his 1610 Sidereus Nuncius.

Once, at the beginning of a semester, on the second meeting of an Astronomy 101 class, one of my students piped up with a comment.  She said that when she had told a certain person (her grandmother, if I recall correctly) that she would be taking an astronomy class, that person had responded by saying that astronomy in particular and science in general was the stuff of devil-worshipers.

My student thus offered the class a wonderful comment.  She was seeking from the outset of class to engage the material, her professor, and her fellow students with a very honest comment, expressing honest fears (her grandmother’s, and perhaps hers, too).  Her comment reflected a sentiment that is not uncommon among students taking science classes—a fear that there is something about science that is contrary to their religion, and in that way there is something about science that is the work of the devil.  (This view is not limited to grandmothers of Kentucky students: Jocelyn Bell Burnell, winner of the 2018 Breakthrough Prize in Fundamental Physics for her work in the discovery of pulsars, writes in her 2013 book A Quaker Astronomer Reflects: Can a Scientist also be Religious? of encountering a certain attitude that people have, an attitude that dismisses and ignores “mainstream, rational scientific explanation and replaces it with a mystery, which apparently only those in league with the devil would wish to question.”)  Few students speak up so boldly, however, which is unfortunate—I do not want to lose these students, and when they speak up they create an opportunity for discussion and engagement.

O Reader of The Catholic Astronomer, when you think of a religion-science conflict such as these students fear, what comes to your mind?  Do you think of the Big Bang theory and a universe that is 14 billion years old, versus the scripturally-based calculations made by the fourth-century Rabbi Hillel II that put the age of the universe at a little less than 6,000 years?  (Right now it is the year 5779 as reckoned on the Jewish calendar—5,779 years since Adam and Eve.)  Or perhaps what comes to your mind is the description in Genesis 1:27 of Adam and Eve being formed by God on the sixth day of creation, versus human beings evolving from lower life forms over a vast span of time.

What do the moons of Jupiter have to do with any of this?  In the seventeenth century the moons of Jupiter, which either Galileo or Simon Marius first discovered in 1609, were the subject of careful study.  They were of great practical value, because they could serve as a sort of world-wide clock.  In the seventeenth century, clock technology had not advanced to the point where a clock could be moved from one place to another and still keep time.  No clock could keep accurate time when carried aboard ship or carriage.  This made it very difficult to synchronize clocks between one place and another.  If you want to determine your position on the Earth using the stars, you need to know what the time is at your location, because of course the stars that are visible are continually wheeling overhead, changing with the time of night.  Not knowing time at different locations created all sorts of problems for astronomy, surveying, map-making, and navigation.  In the case of navigation, this was a matter of life and death and economics, for miscalculation of position could and did result in terrible shipwrecks.  Jupiter’s moons, wheeling regularly about Jupiter, could serve as a universal clock, visible from all points on Earth.

Jupiter moons animation from NASA Hands-On Universe/Yerkes Observatory/Vivian Hoette.  This shows Jupiter and its moons as they appear through a small telescope.

Were there no other use of astronomy than that drawn from Jupiter’s satellites, it would justify well enough these huge calculations, these diligent and scrupulous observations, this large ensemble of instruments built with so much care; [and] this superb building [the Paris Observatory] raised for our science. 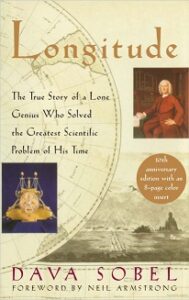 This intense focus on the Jovian moons led to an important discovery.  Frances Willmoth, in a paper on this discovery writes,

In 1671 the young Danish astronomer Ole Römer assisted his mentor Erasmus Bartholin and the French astronomer Jean Picard in an important project employing observations of the satellites of Jupiter, following a method set out in Giovanni Domenico Cassini’s recently published work [on the Jovian moons].  The group travelled to the island of Hven, the one-time site of Tycho Brahe’s observatory Uraniborg, with the aim of establishing its geographical coordinates—especially longitude—with the greatest possible accuracy; the long series of observations formerly made there by Tycho could then be adapted to the meridian of Paris and put to effective use.  Observing Jupiter’s satellites was chosen as the most convenient means available of ﬁnding longitude; the observations made on Hven were eventually to be compared with observations made simultaneously in Paris and Copenhagen. The expedition was not only a technical success, but led to Picard persuading Römer to return to Paris with him and join the staff of the new Paris Observatory.

But there was something weird in the data.  The observed motions of the moons seemed to have some slight dependence on the distance between the Earth and Jupiter.  Römer offered a suggestion for why this might be.  Wilmoth writes:

On 22 November 1676 he [Römer] presented a paper to the Académie des Sciences claiming that the newly-discerned irregularity in the ﬁrst satellite’s motion was explained by light having a ﬁnite speed and that it provided a basis for calculating that speed.  He claimed conﬁrmation from an observation made on 9 November, in which the timing of an eclipse of the satellite [the moon Io] was found to match that predicted in accordance with his theory, differing by 10 minutes from the time that would otherwise have been expected.  He deduced that light would take 22 minutes to cross the whole diameter of the earth’s orbit, thus 11 to pass from the sun to the earth. 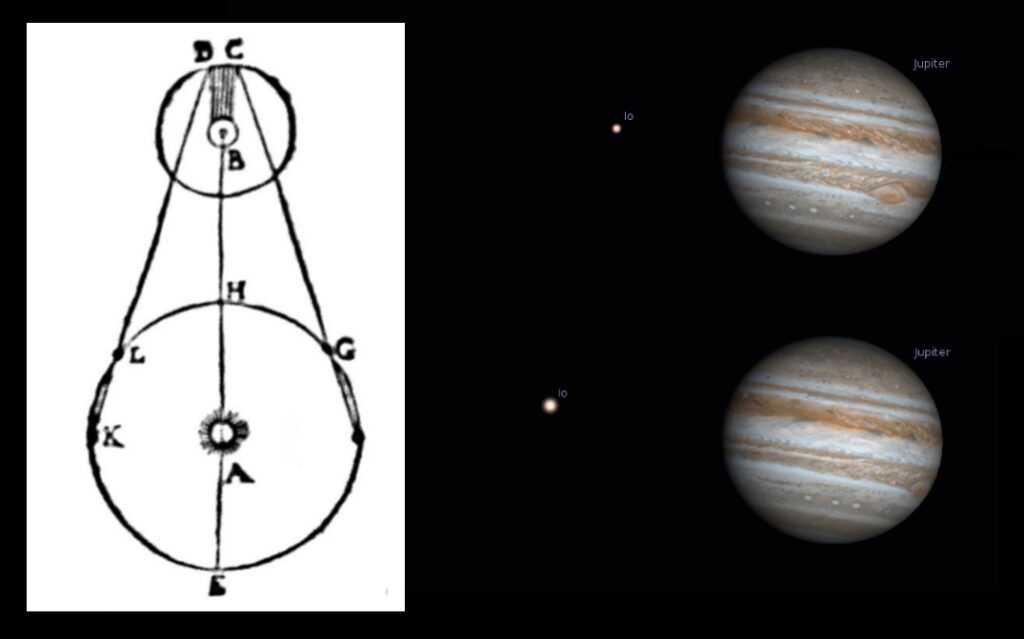 At left is Römer’s drawing of Jupiter, the Earth, the sun, and a moon of Jupiter, explaining the effect of the limited speed of light (from a 2008 article in the Journal of Astronomical History and Heritage by Laurence Bobis and James Lequeux of the Paris Observatory).  At top right is a simulation of the November 9, 1676 eclipse of Jupiter’s moon Io by Jupiter that Römer observed.  Io is just emerging from the shadow of Jupiter as seen from Earth (Io is moving to the left).  At bottom right is what would be seen at that exact same moment if light travelled instantaneously: Io has actually moved fully out of Jupiter’s shadow (and thus shines brighter).  Because of the limited speed of light, Römer saw Io as it was some time earlier.  Because astronomers were observing the Jovian moons so closely in order to use them as a clock, the difference between when calculations said Io should emerge from the shadow based on instantaneous light, and when it actually was observed to emerge, was noticed, revealing that light has a speed.

The observations of Jupiter’s satellites made by the Academy from 1670 to 1675 lead to the discovery in their motion of an inequality not previously known….  M. Cassini and M. Roëmer, then a member of the Academy, after scrutinizing this anomaly, found that it depended of the distance of Jupiter from the Earth….  A very ingenious conjecture on the cause of this inequality first came to the mind of the two astronomers.  They imagined that the motion of light was not instantaneous as all previous philosophers believed, but that it took some time to spread….

Consider the description from Genesis 1:14-19 of the fourth day of creation:

And that means that by the evening of the fourth day the universe appeared, to all scientific measure, to be old—over 2,600 years old based on Deneb, and over 2,000,000 years old based on the Andromeda Galaxy.  Thus, according to the Jovian moons and a plain reading of Genesis, God created the universe in mature form, just as God created Adam and Eve in mature form.  Transport an unwitting astronomer, with all the tools of modern science, to the Garden of Eden on the seventh day, and that astronomer would determine the universe to be millions of years old (at minimum), based on looking at the sky; and would determine Adam and Eve to be many years old based on looking at them.  It stands to reason that our unwitting astronomer—in looking carefully and scientifically upon the sky that God just made and declared good, and upon the man and the woman that God just made and declared good—is not doing the work of the devil in determining these ages, even though that astronomer’s measurements contradict Genesis (because, according to Genesis, neither stars, man, nor woman are even one week old).  Ole Römer did not look carefully and scientifically upon Jupiter with the devilish intent that his action might have an impact on how we read Genesis.  Ole Römer just looked.

My student went on to be a cheerful, positive, and enthusiastic contributor to Astronomy 101.  She did well in the class.  I believe she came to understand something about how science works, and why astronomers say the universe is 14 billion years old (although I suspect her own belief nevertheless aligns more with Rabbi Hillel). I like to think that at some point she told her grandmother that astronomy was not the stuff of devil-worshippers, and that her grandmother listened, and that a few less people now think that there is something about science that is contrary to religion.