Montage of images of solar activity between August 1991 and September 2001 taken by the Yohkoh Soft X-ray Telecope, showing variation in solar activity during a sunspot cycle. Credit: Yohkoh/ISAS/Lockheed-Martin/NAOJ/U. Tokyo/NASA

A new model of the Sun’s solar cycle is producing unprecedentedly accurate predictions of irregularities within the Sun’s 11-year heartbeat. The model draws on dynamo effects in two layers of the Sun, one close to the surface and one deep within its convection zone. Predictions from the model suggest that solar activity will fall by 60 per cent during the 2030s to conditions last seen during the ‘mini ice age’ that began in 1645.  Results will be presented today by Prof Valentina Zharkova at the National Astronomy Meeting in Llandudno.

It is 172 years since a scientist first spotted that the Sun’s activity varies over a cycle lasting around 10 to 12 years. But every cycle is a little different and none of the models of causes to date have fully explained fluctuations.  Many solar physicists have put the cause of the solar cycle down to a dynamo caused by convecting fluid deep within the Sun.  Now, Zharkova and her colleagues have found that adding a second dynamo, close to the surface, completes the picture with surprising accuracy.

“We found magnetic wave components appearing in pairs, originating in two different layers in the Sun’s interior. They both have a frequency of approximately 11 years, although this frequency is slightly different, and they are offset in time.  Over the cycle, the waves fluctuate between the northern and southern hemispheres of the Sun. Combining both waves together and comparing to real data for the current solar cycle, we found that our predictions showed an accuracy of 97%,” said Zharkova.

A comparison of three images over four years apart illustrates how the level of solar activity has risen from near minimum to near maximum in the Sun’s 11-years solar cycle. These images are captured using He II 304  emissions showing the solar corona at a temperature of about 60,000 degrees K. Many more sunspots, solar flares, and coronal mass ejections occur during the solar maximum. The increase in activity can be seen in the number of white areas, i.e., indicators of strong magnetic intensity.

Zharkova and her colleagues derived their model using a technique called ‘principal component analysis’ of the magnetic field observations from the Wilcox Solar Observatory in California. They examined three solar cycles-worth of magnetic field activity, covering the period from 1976-2008.  In addition, they compared their predictions to average sunspot numbers, another strong marker of solar activity.  All the predictions and observations were closely matched.

Looking ahead to the next solar cycles, the model predicts that the pair of waves become increasingly offset during Cycle 25, which peaks in 2022. During Cycle 26, which covers the decade from 2030-2040, the two waves will become exactly out of synch and this will cause a significant reduction in solar activity.

“In cycle 26, the two waves exactly mirror each other – peaking at the same time but in opposite hemispheres of the Sun.  Their interaction will be disruptive, or they will nearly cancel each other. We predict that this will lead to the properties of a ‘Maunder minimum’,” said Zharkova. “Effectively, when the waves are approximately in phase, they can show strong interaction, or resonance, and we have strong solar activity.  When they are out of phase, we have solar minimums. When there is full phase separation, we have the conditions last seen during the Maunder minimum, 370 years ago.”

The Sun is one of my favorite observing targets – I love setting up my solar telescopes and showing viewers sunspots and prominences. I have a lecture about the Sun that I’ve given at schools and other venues – in it, I discuss the Maunder Minimum. For my lecture, I created the following slide showing a possible future minimum. When I read this article, I shouted something unprintable, and immediately went about re-posting it. 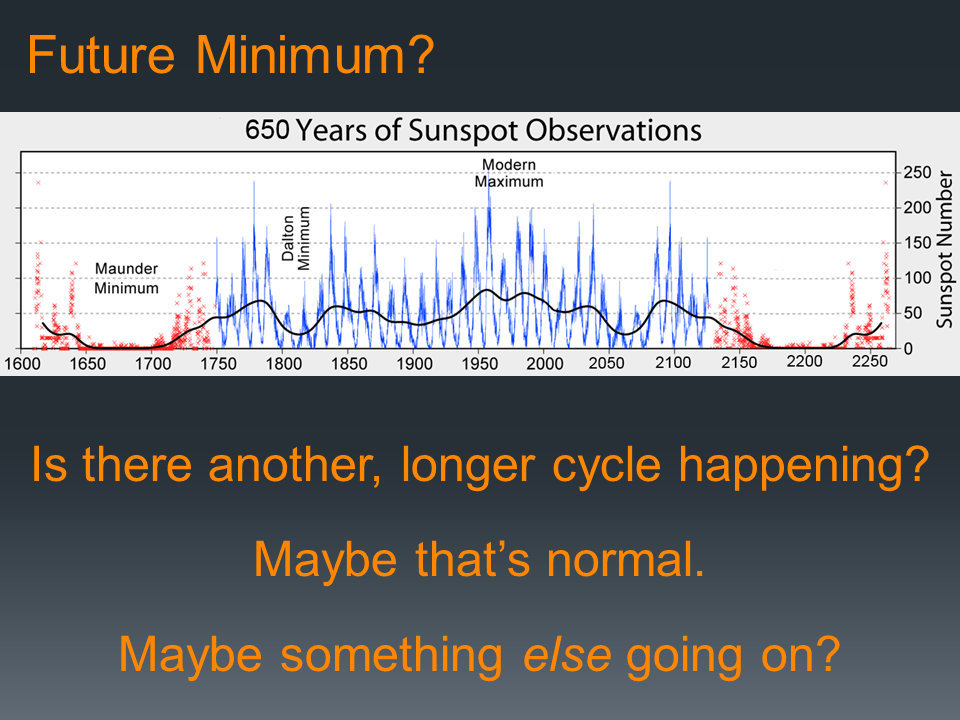 Slide from Bob Trembley’s lecture about the Sun. 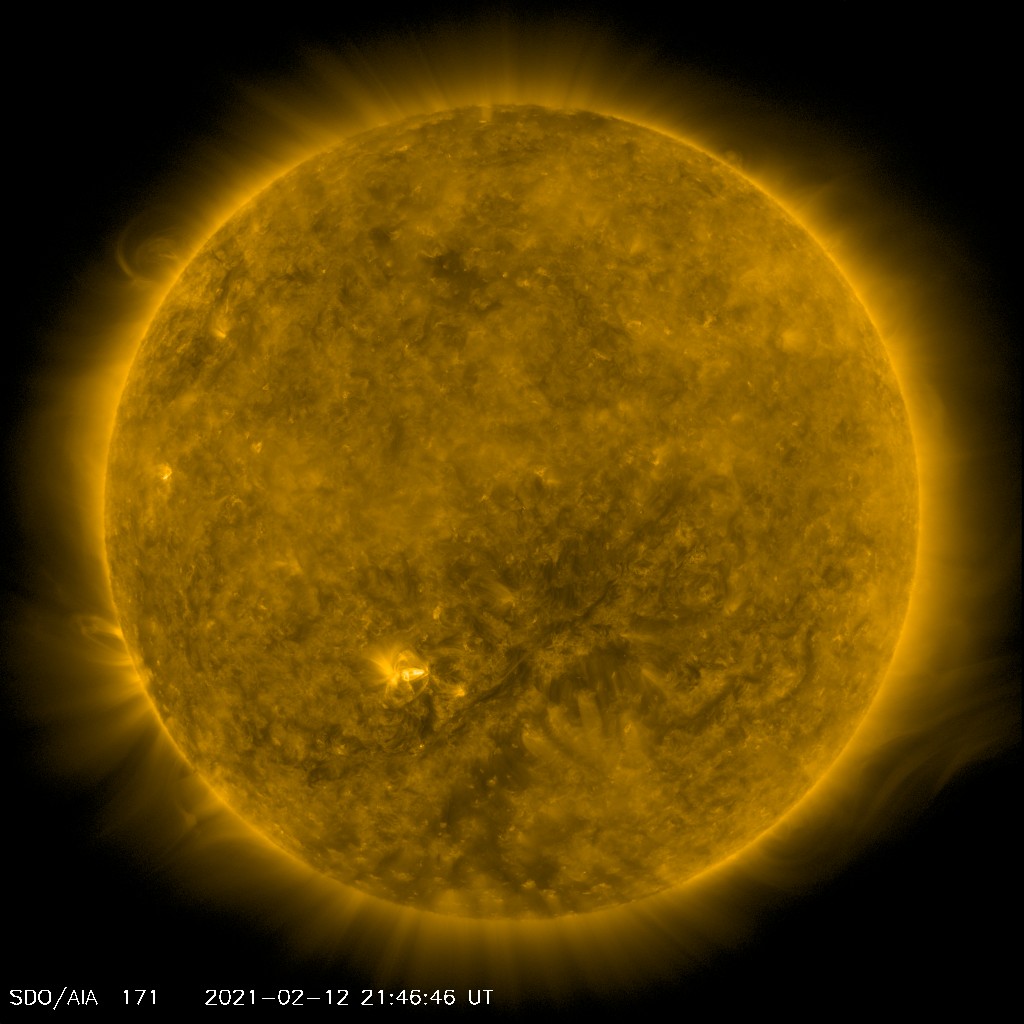 This is a real-time image of the Sun in extreme ultraviolet from the Solar Dynamics Observatory – an orbiting solar space telescope. Click to see other real-time images. Image courtesy of NASA/SDO and the AIA, EVE, and HMI science teams.