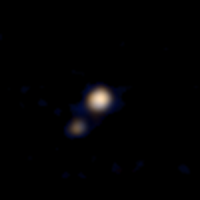 This image of Pluto and its largest moon, Charon, was taken on April 9th by the Ralph color imager aboard NASA’s New Horizons spacecraft, and downloaded to Earth the following day. The image was taken from a distance of about 115 million kilometers (71 million miles) – about the distance from the Sun to Venus.

This is the first color image ever taken of the Pluto-charon system by a robotic spacecraft on approach. The image is a preliminary reconstruction, to be further processed later by the New Horizons science team.

Although blurry at this distance, distinct differences can be seen between the two bodies. The resolution will continue to improve as New Horizons approaches Pluto for its flyby on July 14, 2015. The data rate from New Horizons will be very low at its great distance – it will take months for all the data to be completely downloaded.