A new map plots the distribution of invisible dark matter across part of the sky. On 13 April, astronomers of the Dark Energy Survey made an announcement that began:

Scientists on the Dark Energy Survey have released the first in a series of dark matter maps of the cosmos. These maps, created with one of the world’s most powerful digital cameras, are the largest contiguous maps created at this level of detail and will improve our understanding of dark matter’s role in the formation of galaxies. Analysis of the clumpiness of the dark matter in the maps will also allow scientists to probe the nature of the mysterious dark energy, believed to be causing the expansion of the universe to speed up. 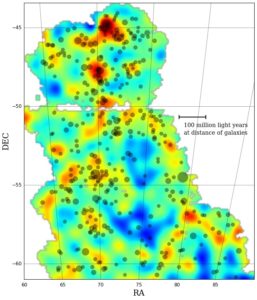 This is the first Dark Energy Survey map to trace the detailed distribution of dark matter across a large area of sky. The color scale represents projected mass density: red and yellow represent regions with more dense matter. The dark matter maps reflect the current picture of mass distribution in the universe where large filaments of matter align with galaxies and clusters of galaxies. Clusters of galaxies are represented by gray dots on the map – bigger dots represent larger clusters. This map covers three percent of the area of sky that DES will eventually document over its five-year mission. Image & caption text: Dark Energy Survey

[To read the rest of of the press release, follow this link.

The observations were made using the Victor M. Blanco 4-meter telescope at the Cerro Tololo Inter-American Observatory in Chile. Here’s a link to the paper describing this work, “Wide-Field Lensing Mass Maps from DES Science Verification Data,” by V. Vikram and colleagues.

Gravitational lensing keeps popping up in different ways here on The Catholic Astronomer.

In December, Dr. Brenda Frye wrote about an example of “strong lensing” creating a natural telescope that allows four different views of a supernova.  Bob Trembley posted a NASA announcement about an exoplanet discovery involving OGLE, which searches for exoplanets by watching for “microlensing” events.

The new Dark Energy Survey map employs a third technique, “weak lensing.”  The gravity of massive objects can bend the paths of passing photons of light. DES astronomers observed subtle distortions in the shapes of 2 million galaxies to deduce the locations of unseen, massive concentrations of dark matter.

One reason I found this announcement exciting was that it came from Fermilab, the laboratory where I have worked for many years.  Fermilab is one of the institutions collaborating on the international Dark Energy Survey.  I’m not involved with this project but I have friends who have put many years of effort into it.  So I enjoy seeing new science flowing from the fabulous camera they built and tested.  I look forward to much more, as the DES continues to survey the sky.