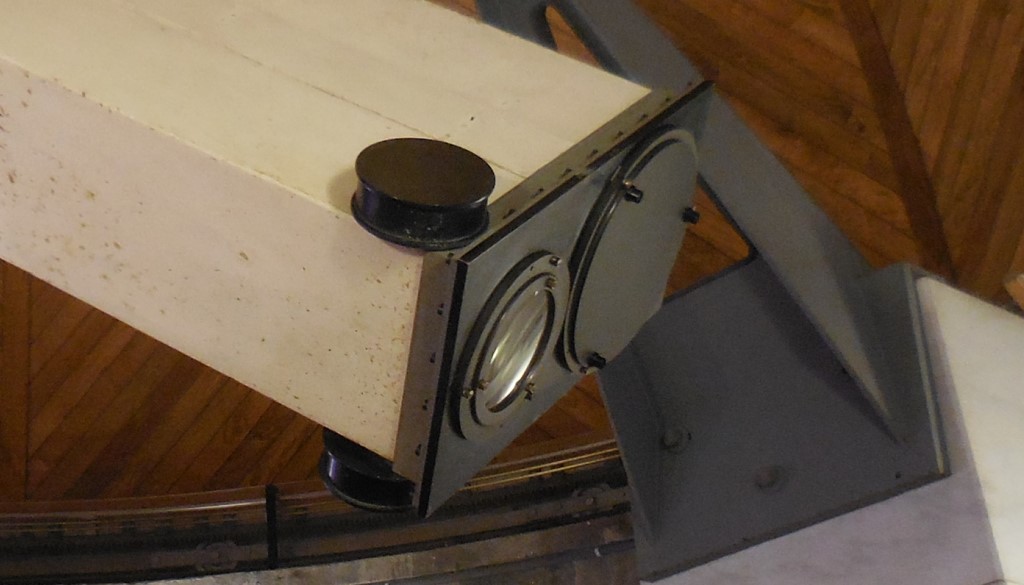 In June, when I was at the Vatican Observatory in Castel Gandolfo, I had the opportunity to observe with the Observatory’s historic 19th-century “Carte du Ciel” telescope!

The Carte du Ciel (Map of the Sky) was to be the first photographically-based atlas of the stars; it would produce both a map and then a catalog of the stars. Observatories located all over the world participated in the project. The Vatican Observatory, newly re-formed under Pope Leo XIII, would participate in the Carte du Ciel as one of its first big projects, which ran from the 1890s to the early 1950s.

The telescope for the Carte du Ciel was originally on the walls of the Vatican.  It was moved to Castel Gandolfo in 1942.  And it was recently restored to full working order!

I went there with Frs. Matteo Galaverni and Robert Janusz, and Sr. Irene Tranquillini.  We did some basic observing—Vega, Albireo, the Ring Nebula, Mizar—dodging clouds all the while.  The Carte du Ciel telescope is not a particularly large telescope.  It was not even large for its time; it was built for a particular purpose (it has that box-shaped tube because two parallel telescopes are housed within it), not for size.  But it gives nice images, and it is really fun to use.

Regular readers of Sacred Space Astronomy know that I am always interested in what can be done with cheap equipment.  There is much emphasis in astronomy on expensive equipment, while there is wailing and gnashing of teeth about how astronomy must appeal to a broader, more diverse swath of people.  Well, many, many people cannot afford a bunch of expensive gear, so if astronomers want a more diverse group of people to take interest in the subject, we should emphasize what can be done cheaply.  I am always trying to see what can be done with a cheap cell phone camera that I picked up years ago for $10, to test what can be done in astronomy with affordable materials. I call this camera the Ten Buck Wonder, or TBW. (Click here for other “Affordable Astronomy” posts.)

Of course, I took the TBW with me. I even got some images with it through the Carte du Ciel telescope.  Fr. Janusz said that I would soon be using the TBW to do photometry (his area of research)!

In the image above are Janusz and Tranquillini. Galaverni is behind the mount, getting the computer that controls the drive of telescope up and running. Note the clock at center and the movable stairs, both of which are also visible in the photo of Lais (above). The whole observatory building has been renovated recently as a visitor center, so it is all in great shape.

The drive that keeps the telescope tracking the stars is visible in the photograph at right, above, and in the video below. At left is Sr. Tranquillini observing Mizar, and Fr. Galaverni taking a photo. Sr. Tranquillini is a math teacher and an amateur astronomer who has her own Schmidt-Cassegrain telescope.

Note the lights illuminating the walls. I would not have thought that blue would be a good choice for preserving night vision, but I did a little reading and some people seem to argue that blue has certain advantages. I would prefer straight red, but the fact is, night vision really is not that crucial at the Carte du Ciel telescope, because the lights around the observatory (off Vatican territory) are really bright. As you can see in the photos below, they light up the dome of the telescope rather well. If anyone needs an explanation of why the main telescope of the Vatican Observatory is now in Arizona, these photos should suffice.

Of course I tried some very simple astrophotography, using basic cameras. I found video worked best this time. The first video below shows my effort at capturing Vega. I made it using the Ten Buck Wonder. However, the TBW could not capture Mizar, which is the second video. For it I used my eight-year-old Nikon Coolpix. The streaking effects you see in the videos are artefacts of the cameras—you did not see them when observing by eye.

What a privilege to be able to observe with this historic telescope!