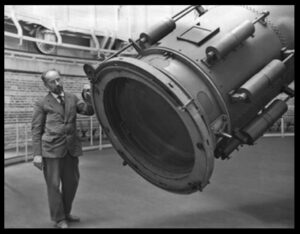 The largest refracting telescope in the world is at Yerkes Observatory in Williams Bay, Wisconsin, and you can observe with it.

A refracting telescope is an “old school” telescope—the long, skinny kind with lenses at both ends of a tube—the kind of telescope Galileo used.  From Galileo forward “refractors” got bigger and better until the technology reached its pinnacle in the 1-meter or 40-inch refractor at Yerkes.  The observatory and the 40-inch were built in the 1890’s with money supplied by Chicago businessman Charles T. Yerkes and ambition supplied by astronomer George Ellery Hale.  In the early twentieth century mirror technology caught up with lens technology.  It became cheaper and easier to build telescopes with mirrors, and no refractors larger than the Yerkes 40-inch ever went into use. 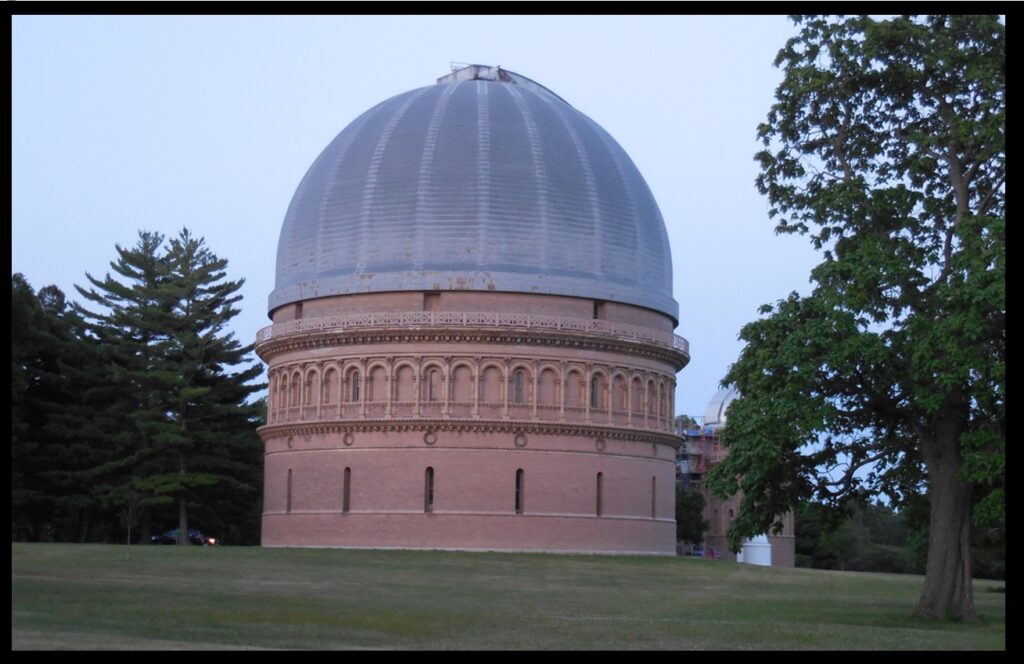 Above and below—two twilight views of the dome of the 40-inch. 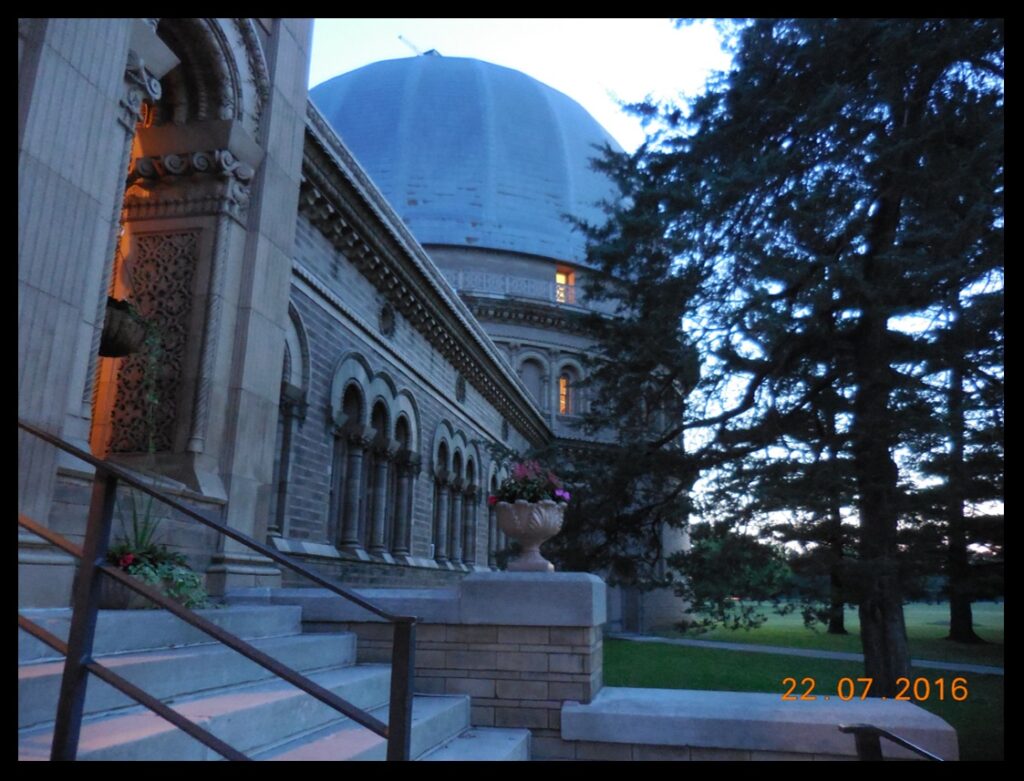 When I was about fourteen, just being at this place would have been enough excitement to have me turning somersaults!  Many years later, I was still pretty stoked up over being here.

The old-school refractor technology is, however, really durable.  The 40-inch is still operational, and now it is open for public use.  For a hefty fee (hey, Charles Yerkes is no longer around to pour money into the place) you can view through this 120-year-old behemoth that was used by Edwin Hubble for his research.  I am here to tell you that doing so is very cool.

Left—the eye lens end of the refractor.  Right, the refractor is big.  See the spiral stair for a sense of scale.

The telescope is remarkably easy to use.  Our guide—Dan Koehler, who selected Saturn, Albireo, the Ring Nebula (M 57), and the Wild Duck cluster (M 11), for our targets on the evening I was there with my wife Tina (July 22, 2016)—was able to either just push the telescope around by hand, or control it by motors.  For the most part he just found objects by means of their coordinates,* and when he did that the objects would be right there in eyepiece.  When the telescope was clamped in position it did not move at all; it did not even vibrate sensibly when I adjusted focus.

And then there was the floor.  The 40-inch is really long, and so the eyepiece moves up and down a lot when the telescope is shifted from one object to another.  The floor of the observatory is a giant elevator, and can be moved up and down many feet in order to position the observers at the right level to be able to access the eyepiece. 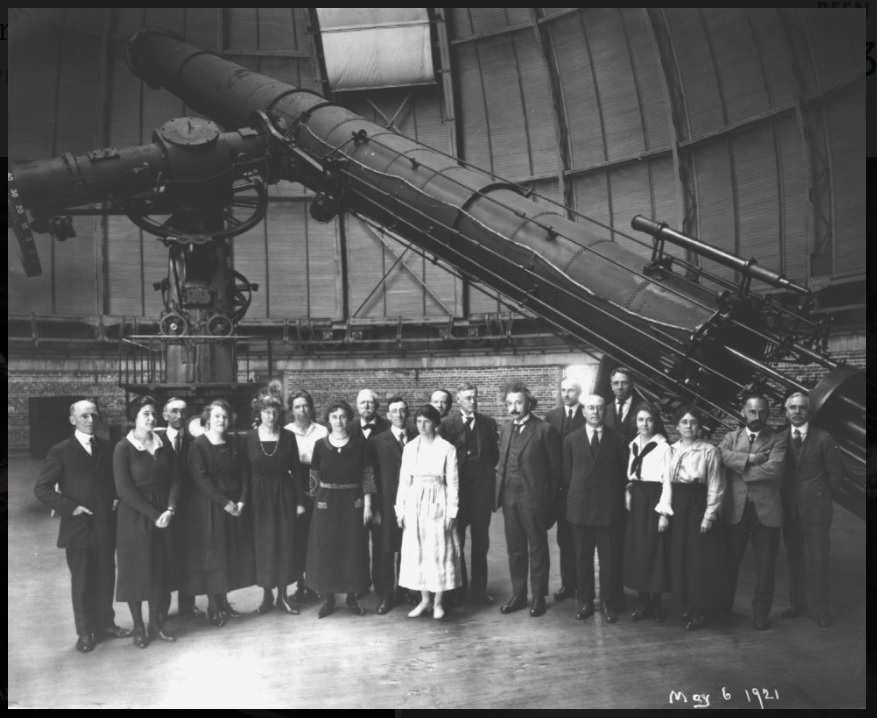 Albert Einstein and the staff of Yerkes observatory in front of the 40-inch in 1921.  The floor is raised here—note how short the pier that the telescope sits on appears to be.

Each object seen through that eyepiece was remarkable.  Saturn was low in the sky, so its image wavered a bit owing to air currents, but the Cassini division in the rings was very easy to see, cloud bands were clearly visible, and the planet was surrounded by many visible moons.  I even got a lousy photo of Saturn with my “point and shoot” camera.  Albireo was remarkable for how brilliant its two components were (they were as bright as Arcturus or Vega seen through a 6-inch telescope), and for how tiny they each appeared—no signs of air currents there.  The Ring Nebula was easily seen—no need for “averted vision” or other tricks to try to see it; it was just there and its shape was easily traced.  With a little effort I thought I could make out some structure and the central star.  The Wild Duck cluster was, like Albireo, brilliant. 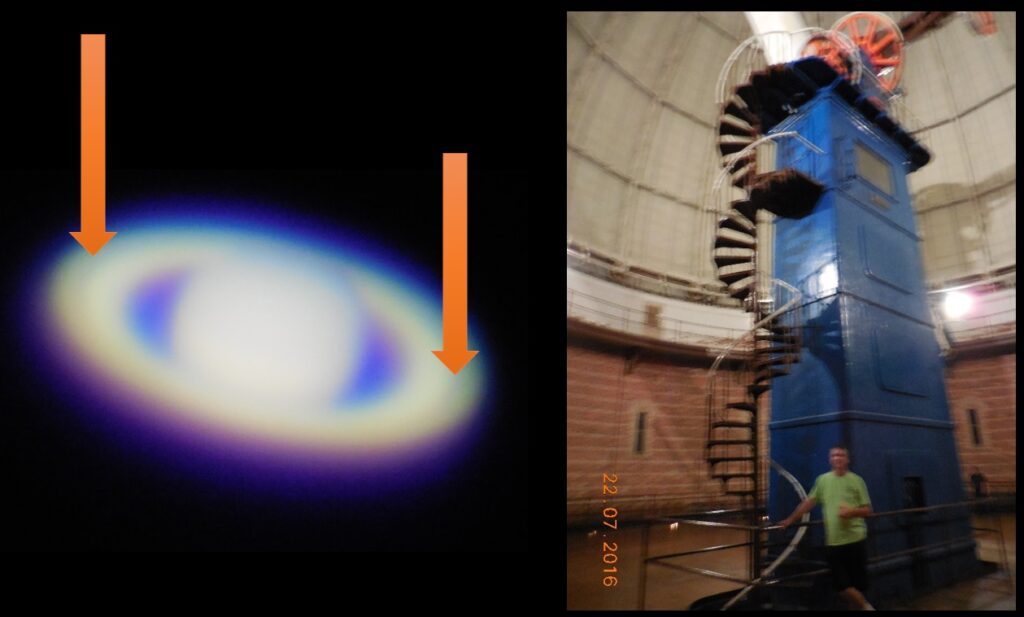 Two bad pictures taken with shaky hands.  Left—my own personal photo of Saturn, obtained with the 40-inch and a “point and shoot” camera.  Yes, it is terrible (Saturn looked much better to the eye), but you can sort of see the Cassini division (arrowed)—and besides, I took it with the 40-inch at Yerkes!!!!  Right—yours truly by the telescope.

In short, the 40-inch showed each of these objects better than I had ever seen them before—and better by a noticeable margin.  It was a privilege to be able to observe through this telescope.  I hope to go back again some time to see the moon with it, and maybe to see Jupiter when high in the sky. 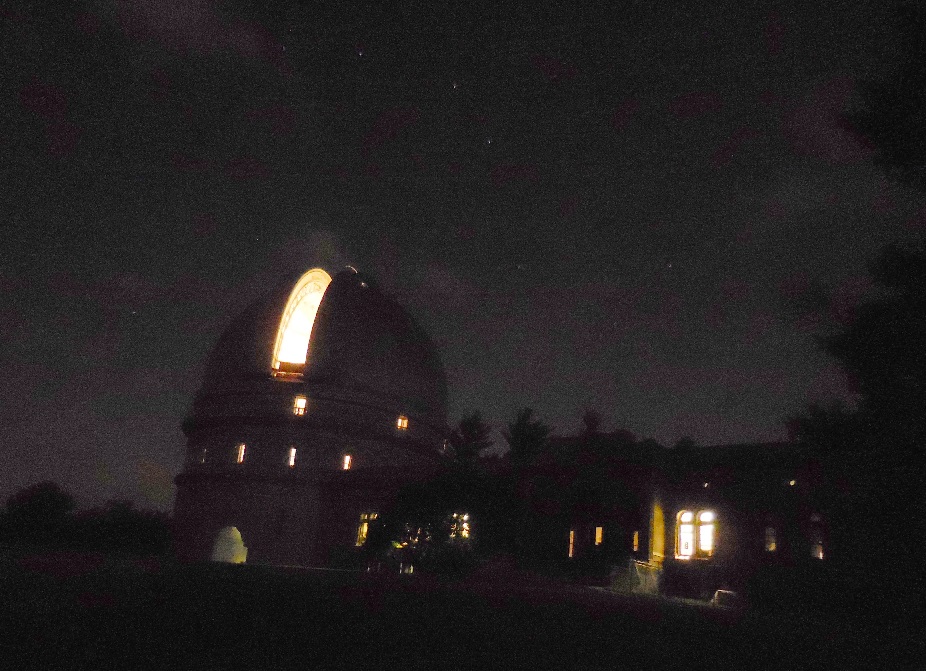 The dome of the 40-inch at Yerkes Observatory, under the stars of the Big Dipper.

*By means of a mechanical system, not a computer.  In fact, our guide relied on that a bit too much—a thunderstorm the previous day had apparently interrupted power for a while, throwing off the clock, and throwing off his efforts to use coordinates to find things until he realized what the problem was.  The 40-inch might benefit from a good “red dot” finder.