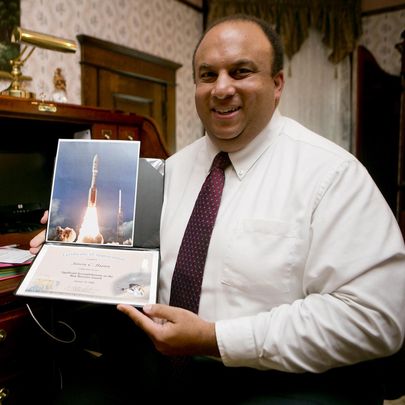 Photo of Jason Bunn holding a picture of the New Horizons launch. This picture was from the Stevens Point Journal article from July 24, 2015. Click here or on the image to go to the article.

A week ago, yesterday, I was on vacation, enjoying a home visit with friends from my college/seminary days.  It was Friday in Wisconsin which means we were enjoying a good fish fry, giving thanks that everyone in the family was doing well, and reminiscing about a little job my friend Jason Bunn had about ten years ago: Software Engineer at John Hopkins University Applied Physics Lab, helping develop the navigation software for the Cassini Probe and New Horizons.

In typical Jason fashion, he was quite humble about his involvement in the programs.  When I asked how he was handling all the Pluto attention in the news, he said it was a little surreal for him, especially since ten years have passed.  Jason recounted how weeks and months have gone by where he didn’t even think about New Horizons.  With each of these reflections, Jason would always follow up with a quick qualifier along the lines of, “But I really didn’t do that much.  We (the navigation programers) were basically a grounds crew for a football stadium.  We just helped set the field for the scientists to play on.”  Though I admire Jason’s humility, two thoughts crossed my mind: 1) That’s one pretty exclusive grounds crew and, 2) No grounds crew, no game!

As the evening went on and the reminiscing continued, his wife, Darcy Bunn, let me know of an article the Stevens Point Journal was going to run (one of the local newspapers from where I grew up).  Jason gave an awkward sigh, explaining she contacted the newspaper without talking with him about it.  For me, it made complete sense.  If Darcey had not called the Journal, Jason would have done what he always does: quietly go about his work at Sentry Insurance, devoting himself to his faith and his family, and not drawing attention to himself.  I share this with you to not only embarrass a good friend, but to thank Jason and all the “unknown groundskeepers” of the New Horizons mission that are not getting all the media attention.  These types of missions are not done by individuals, but a community working toward a common goal.  Therefore, enjoy this local article on New Horizons and may the excitement of Pluto continue to inspire more women and men to not only dream about exploring space, but to be a part of a community that contributes to our knowledge of the known universe.

To read the article, you can either click here or on the picture of Jason.

*A little disclaimer: At one point of the article, they have a photo gallery of Pluto images.  Some of the images have proposed names of surface features.  As with my last post on New Horizons, remember that these names are not finalized and need to go through an approval process.  Enjoy!