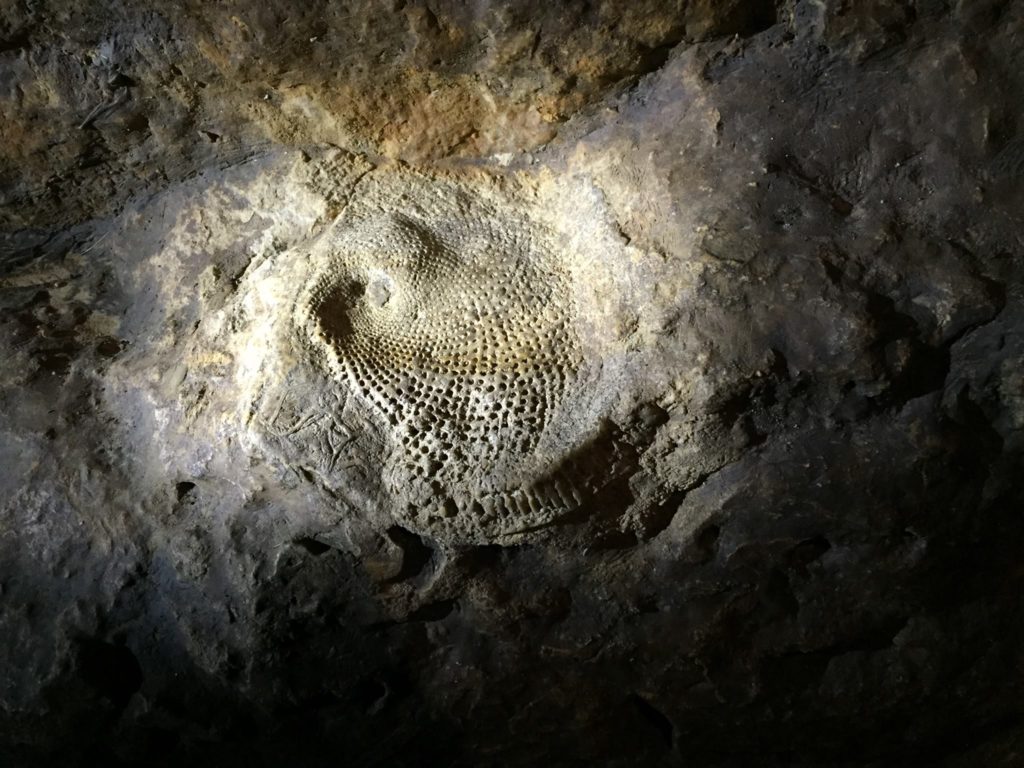 The fossilized remains of an ancient sea creature whose body creates a spiral consistent with the fibonacci sequence.  Picture taken at Niagara Cave, just outside of Harmony, Minnesota.

The first time I learned about fibonacci numbers, it blew me away!  The sequence is a simple pattern of arithmetic starting with 1 + 1 = 2. After that, add the answer and the second number of the equation, 1 + 2 = 3.  Then, continue the sequence over and over again (2 + 3 = 5; 3 + 5 = 8; and so forth).  What you end up with is an infinite sequence of numbers that, amazingly, is found throughout creation from ancient fossilized sea creatures to spiral galaxies.  After my initial fascination with this sequence, I slowly became hesitant about the “meaning” of fibonacci numbers when I discovered rather bizarre applications ranging from hyper-literalist “theo-science” to New Age “guru-ism.”  Between the extremes of my personal fascination and “click bait” craziness, fibonacci numbers in nature grab my curiosity to this day.

Here is a TED talk by mathematician Arthur Benjamin on understanding Fibonacci numbers.

So, where did my curiosity with fibonacci numbers begin?  In my undergraduate work, I studied music.  I primarily focused on saxophone and voice, but toward the end of my college career, I began to work on music composition.  Dr. Charles Young, Professor of Music at the University of Wisconsin – Stevens Point, introduced me to the art of composition by analyzing Bach minuets, canons, and other works.  In addition to being wrapped in the simple beauty of the pieces, I also studied the constant ratios of notes and measures used in these pieces: 1 to 2, 1 to 3, 2 to 3, 3 to 5, and so forth.  My mind began to comprehend music in a new way that fueled my first compositions, trying to apply this “musical math.”  Growing up in a “pop music” culture fueled by emotion, it never dawned on me that there was fascinating math embedded in my favorite songs.

Over time, I got drawn into the fascinating, but slightly maddening world of how we find mathematical ratios and proportions all over music, art, architecture, science, and nature.  I read the book “Godel, Escher, and Bach: An Eternal Golden Braid” and became consumed with the idea of strange loops, composing my own two, three, and four part canons.  To put it simply, I was hooked on music composition and the math behind the music. (I still write a little on the side for the schools and parishes I have served.)  Yet, the more I tried to be a “musical mathematician,” something became very evident to me: even though I might have gotten the math of the music right, I have never written anything that approaches the simple elegance of a Bach minuet.  This revelation made it clear that a key ingredient was missing not only in my music compositions, but in my understanding of what sequences like fibonacci numbers actually mean on a practical level.

Two of my favorite musical experiences: Bach’s Cello Suite No. 1 in G Major and Yo Yo Ma!

So, what is the missing ingredient when understanding the connection between the math of music and my compositions?  I would argue, the existence of beauty.  I have encountered a number of musical works that display mathematical brilliance.  Whether it be classical or contemporary, jazz or twelve tone, the tipping point between whether I shell out the $1.99 to iTunes or shrug my shoulders and go on to the next piece of music is whether or not I find the music beautiful.  When I apply this insight to the relationship between sequences like fibonacci numbers and beautiful things we find in the natural world, one can ask the question: Is it the math that defines an object as beautiful or is there a self-evident quality in nature, so powerful in its expression that we find hints of its inner beauty all around us, even in the human construct of mathematical equations?

I am much more at home with the idea that there is a fundamental, self-evident beauty, which happens to be consistent with human pursuits of truth like math and science.  If we flip the narrative and think there is some type of “magic” to things like fibonacci numbers, we run the risk of creating a “neo-gnosticism” in which math and science are the only tools necessary to understand the world around us.  Rather, when we see a healthy balance and integration of science, art, music, literature, philosophy, and theology, we begin to understand that beauty points us toward a transcendent reality that is not conditioned by time and space: A transcendent reality we name Father, Son, and Holy Spirit.

As idealistic as these images of beauty may be, we need to acknowledge a great “distortion” amid our world of beautiful things.  The Catholic tradition names this “distortion” Original Sin.  In a fallen world, we must be careful not to presume that what is interpreted as “pristine” expressions of beauty are in and of themselves sufficient to explain the transcendent source of all beauty.  For example, one may feel that paintings done according to the tradition of Realism are the best expressions of truth because they communicate a clear, objective image that is self-evident to anyone who gazes upon them.  However, the Impressionist would look at this same canvas and argue that this is just the “mask” hiding the inner, subjective truth of the scene that may look far different from the external appearance.  The modern and post modern artist may scoff at the very idea of beauty, presenting instead a canvas that is torn, stabbed, and splattered with paint, symbolically displaying a fundamental distrust in an objective source of goodness or beauty.  However, the Catholic could present this artist with the image of the crucified Christ, explaining how on this twisted, torn, pierced, and bleeding “canvas,” we do not merely see an image of the death of beauty, but rather, as Hans Urs Von Balthasar put it, we also see “The Beautiful” himself, expressing his love which knows no bounds, even to the point of taking on the dark twisted reality of our sinfulness and death.

In short, is beauty in the eye of the beholder?  At one level, yes, beauty is in the eye of the beholder.  However, in order to perceive beauty, there is an essential relationship in which the beauty of another touches the beauty within the beholder, creating a dynamic exchange that is named an experience of beauty.  This exchange reminds me of St. Augustine’s analogy of the Trinity as a mystical gaze of love between Father and Son in which the gaze “spirates” the Holy Spirit.  In this sense, we can see a hint of God in every encounter of beauty, while acknowledging that sin can make this beauty distorted and more difficult to “see.”

Fr. Barron on evangelization through beauty

Discussion: To post this blog on a page dedicated to a Catholic perspective on astronomy obviously begs the question – as we look to the heavens and see both elegant proportion and chaos, life and death, creation and destruction, we also affirm a deep resonance in the human soul of beauty and meaning.  How do you experience beauty in our natural world and what human expressions of this beauty draw you to its source?