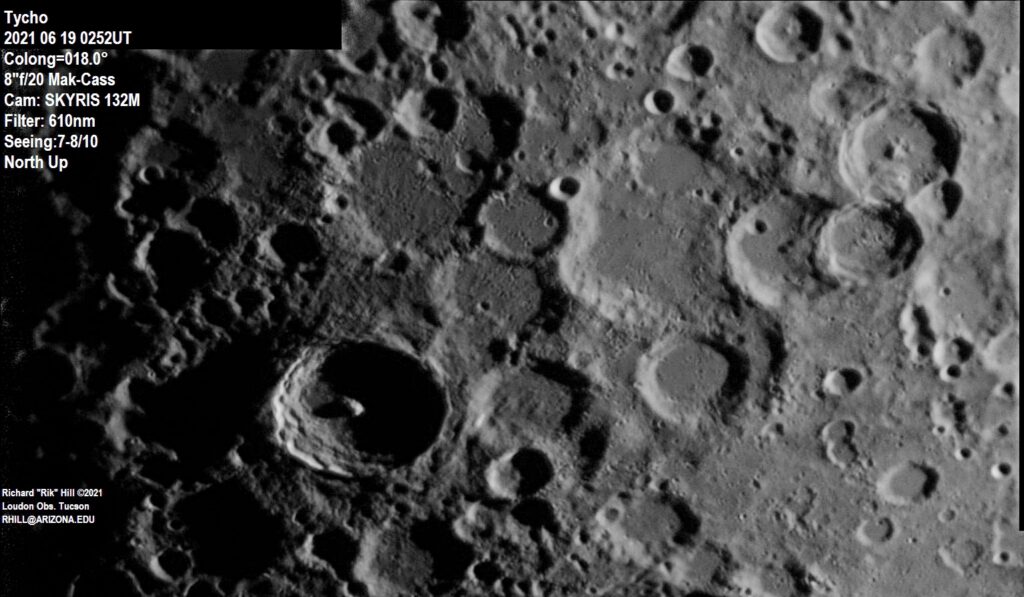 Wonderful sights on the terminator this particular night. Chief among them was the beautiful crater Tycho (88km dia.) a relatively young crater of “Copernican” age. Analysis of samples of one of the rays taken during Apollo 17 led to an age determination 108 million years. Some lucky dinosaur got to see one spectacular flash in the night sky! Notice the crisp nicely terraced interior wall and the central peak catching the first rays of the morning sun. The crater adjacent to the right is Pictet (65km) and is much older, covered in ejecta from Tycho. Farther away is a similar sized crater Saussure (56km) with less ejecta on and in it. Below is the crater Proctor (54km), a much old crater some 3.8-4.5 billion years old and it looks it with many secondary craters breaching it’s walls.

Below Tycho, half in shadow is Street (60km). Above Tycho is a smaller crater in full shadow, Tycho A (31km). Between the lower wall of Tycho A and the upper wall of Tycho is the landing site of Surveyor 7. This was a highly successful mission that took over 20,000 images at 200 and 600 line modes on a vidicon. Also this spacecraft did a lot of soil analysis and imaging of rocks and landforms all around the craft. It was a great early look at our nearest neighbor.